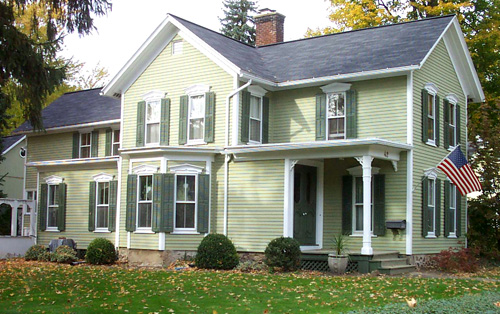 The Italianate style home and carriage barn at 42 Woodlawn Street in Fairport was designated an historic landmark by the Fairport Historic Preservation Commission (FHPC) in 2014. This home named for its' current owners, Phil and Donna Yawman, was built circa 1878. The property meets four of the five possible criteria for designation: history and culture of the area, historic personages, architectural style and is a recognizable feature of the neighborhood.

This Italianate house, a style popular from 1840 to 1885, is a two story cross-gable form with a secondary gable in back.

History and Ownership
Martin Wood, a farmer, owned the property which was then called Woodland. Mr. Wood sold the land on Woodland in 1875 to Lorin (Lauren) L. Knapp. At that time, Mr. Knapp was a successful farmer and storeowner. His wife's name was Mary Wood, who was the daughter of David and Margaret Wood. She died in 1894.

Lorin L. Knapp (1815 – 1883)
An early settler, Lorin came to Perinton in 1835. He bought land from Jerry Ramsdell and built a grocery and boat barn on the south bank of the Erie Canal. The bridge beside the store was called Knapp's Bridge, now Lyndon Road Bridge. In the early days of canal travel, most packet boats stopped there to secure fresh fruits, vegetables, meat, and fresh drinking water. At times it was said that there would be several boats tied up there, sending their "Hoggies" for the water. There is one record of a Sunday, when there was no canal travel, when about 200 boat people were tied up at the Knapp's and they held a religious service. Mr. Knapp also served as fence viewer, overseer of highways and school district trustee.

After buying the land on Woodland he built the home and carriage barn and moved his wife Mary and family into the village. 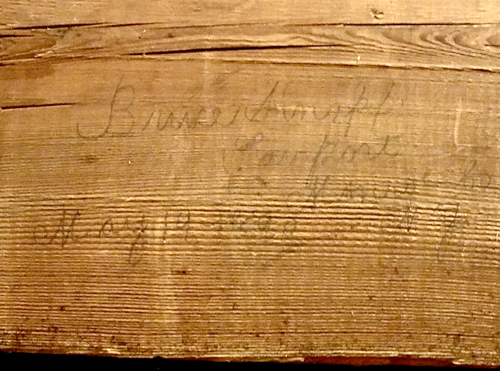 By at least 1898, one of their sons, Albert Henry Knapp owned the home and lived there with his children. Son Bruce and daughter Pearl. Albert, like his father, was a farmer. His land was in Wayne County, just east of Perinton. Mr. Knapp is said (per great granddaughter-in-law Patricia Knapp) to have not liked living in the village and subsequently moved back to his farm. He advertised in 1902, "My house, barn, with one acre land, variety of fruit, situated on Woodland...will be sold or rented." His farm was not sold until 1909. Bruce Knapp's son was also named Albert Henry Knapp*. See sidebar article for information on this grandson.

Warren Pannell (1844-1924)
Another successful farmer from Perinton purchased the property in 1904 after selling his farm and fruit stand business on Pannell Road. Mr. Pannell's father, Silas John Pannell, bought the original farm in 1857 at the corner of Pannell Road and Pittsford-Palmyra Road. The Pannell farm was later split between two of the brothers, Silas Jr. and Warren Pannell who continued to farm for many years. Warren sold his land in 1903, before moving into the village. He likely lived there until he died in 1924. The Pannell's were life long members of the Southern Methodist Church on Wilkinson Road.

As farmers became successful and had hired hands and sons to carry on the business or they were ready to sell and settle elsewhere, they often moved into a home in the village. Here there was a less harsh life and they and their family could be more involved in community service, church and social organizations.

The "barn" or carriage house on the property is representative of the lifestyle of the day. A horse or horse and carriage were the only way to get to and from social activities, church, and out to the farm were needed.

The Yawmans
Donna M. and Philip H. Yawman purchased the property in 1967 from the estate of Esther Vance Goodnough. Esther and her mother moved into the house in 1927 and a few months later she married Charles H. Goodnough. In her later years, Mrs. Goodnough was known for giving walnuts with pennies in them, to the neighborhood children. The Yawmans have now lived at 42 Woodlawn for over 47 years.

Donna Yawman has served the Fairport community in numerous ways. She was an Assistant Guidance Counselor for many years and had various volunteer and paid positions in village government. She is a member and has been an officer of the Urban Renewal 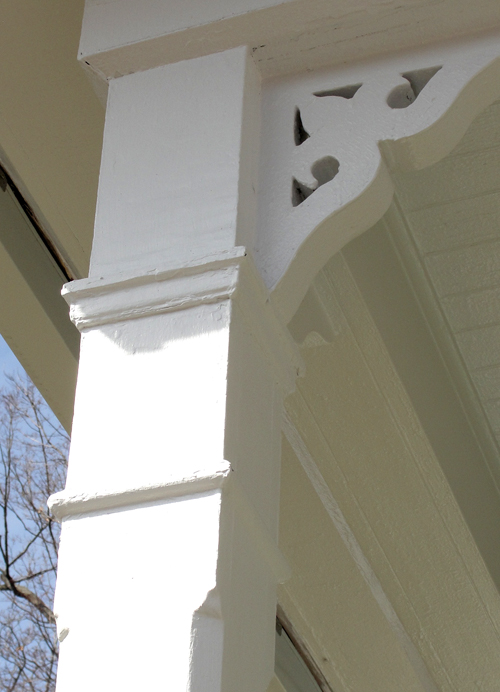 Agency, now the Office of Community Economic Development (OCED) from 1972 to the present (2014). She has been active in the Chamber of Commerce, and the Fairport Branch of the American Association of University Women. She served as Village Trustee from 1980 to 1991, Deputy Mayor from 1987 to 1989 and ran for Mayor in 1990. Donna also serves the community, volunteering for Dollars for Scholars, as Scholarship Chair and is involved with counseling and teaching at the Church of Assumption.

The posts on the front and back porch are beveled with simple bracketing and molding details.

Phil, a graduate of Notre Dame in 1962 and graduating with a Masters Degree at the Syracuse University School of Social Work in 1971, has also received degrees from St. Bernard's Institute and the University of Rochester. He has worked and served many not-for-profits organizations in Monroe and Livingston County. Threshold Center for Alternative Youth Services, Inc., Community Networks, Inc., Daybreak Alcoholism Treatment Facility, Livingston County Community Services and is currently providing counseling services at ESI - The EAP in Rochester, NY. He has served on numerous government and community boards including the Monroe County's Board of Mental Health – Alcoholism Committee, and the Disaster Mental Health Response Team. He is a permanent ordained Deacon in the Diocese of Rochester's Roman Catholic Church, and currently serves at the Rochester Institute of Technology. He and Donna are members of the Church of Assumption in Fairport. 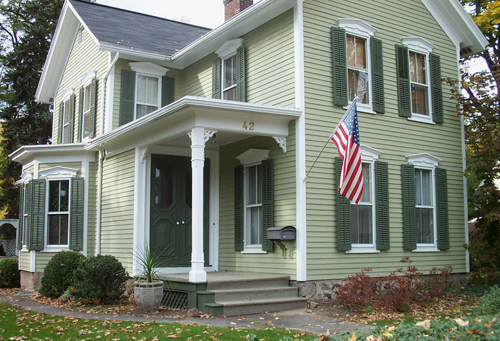 This Italianate house, a style popular from 1840 to 1885, is a two story cross-gable form with a secondary gable in back. The porch on the south side makes it appear asymmetrical which is typical of about 20% of Italianates. It has overhanging eaves, tall rectangle top windows with pediment crowns.

The one story front and back porches have supports with beveled edges and brackets. The front entry porch leads to tall wood double doors with elongated octagon panels on the bottom half and the same shaped glass panels on top half. Large-pane glazing in the door itself first became common in Italianate homes.

The windows are two-over-two double hung with the original operable louvered shutters. On the south side there is a one-story bay window with same window shape and crown detailing. Window hardware was patented in July 2,1879, Morris Feb. 1879. The simpler detailing of this Italianate is reflective of the later part of the Italianate period. 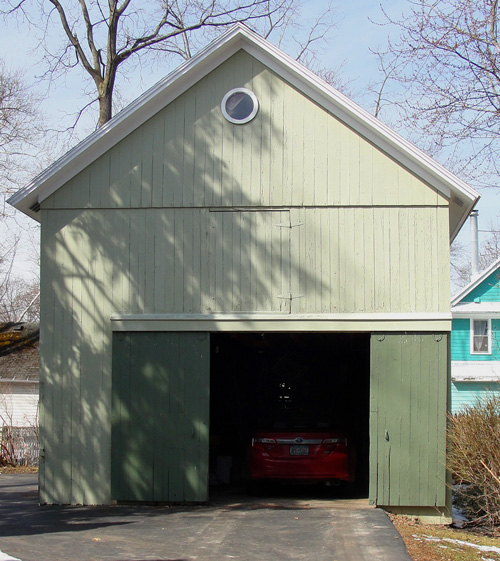 The carriage barn is a simple front gable structure constructed with posts and beams. The barn also built circa 1878 has vertical wood siding, second story hinged loft door, with front and side doors that open on medal gliders. There is a round window in front peak and a small stall window on the back. A large grain bin, hay drop and a stall are still intact in the lower level. The barn housed horses until the 1950s. The upstairs of the barn has been converted into a recreational room.

The barn recreational area, now Phil's "office", was used for years as a hang out. High school aged kids gathering there for card games, etc. It was so popular a place, that there were often kids using the barn when the Yawman kids were not even around.

The barn is a simple front gable post and beem structure. There is a large grain bin, hay drop and a stall are still intact (2014) in the lower level. The barn housed horses until the 1950s.

Feature of the Neighborhood
As you turn the corner onto Woodlawn Avenue, you see this Italianate from the side and it is striking. The large double lot allows you to see the front and side along with the carriage barn, which is on the north side of the lot. 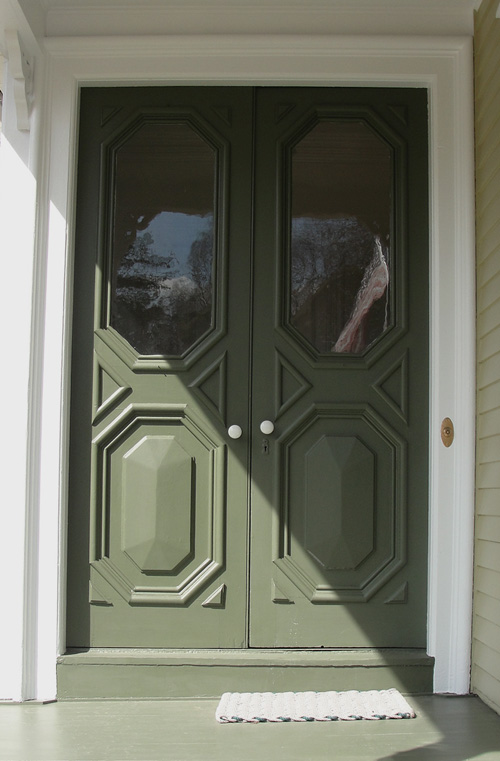 The tall double doors have elongated octagon panels on the bottom half and the same shaped glass panels on top half. 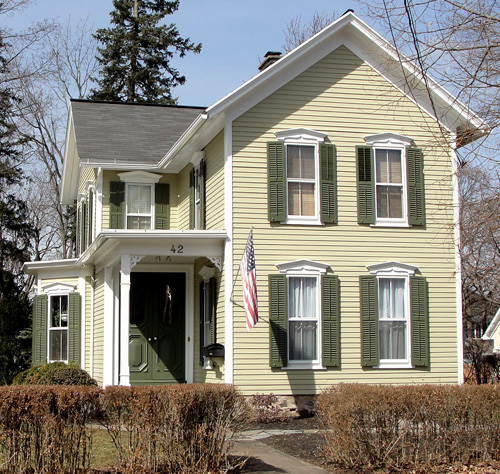 Martin Wood sold the land at 42 Woodlawn, then called Woodland, in 1875 to Lorin L. Knapp.

The windows throughout the house have crowns and the original operable louvered shutters. 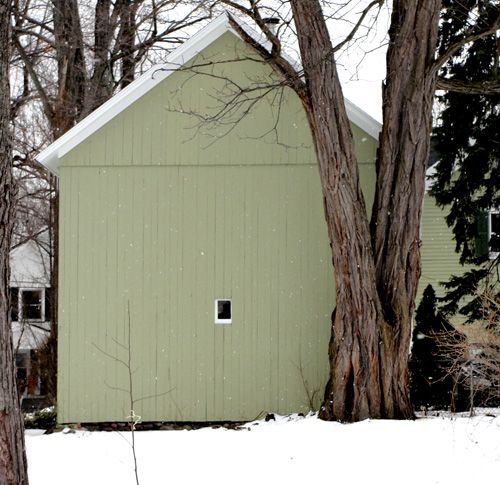 The horse stall and window shown is in the back of the carriage barn. The owners had horses here until the village ordinances prohibited in the 1950s.

This sliding door, is larger than a door today might be for ease of bringing the horse(s) in or out of the barn. 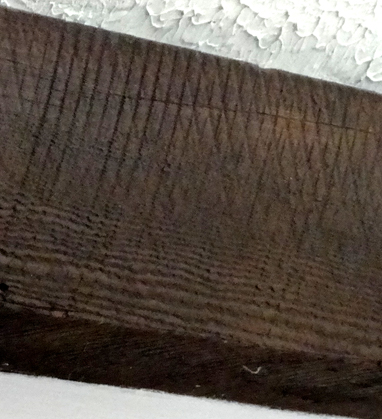 Dating barns is difficult. One clue would be to the sawmill marks on the beams. This pattern of marks indicate that the wood was likely planed after 1820.

Named after his grandfather, Albert H. Knapp was married to Harriet Turner. Mr. and Mrs. Knapp raised two children Cathy and Warren on Fifth Avenue. In his early years he worked on his father Bruce's farm on Watson Rd. He served as Village Trustee and Mayor, and on the Fairport Municipal Commission. He also served as Director of the Fairport Savings and Loan for 18 years, owned the Texaco auto shop at 23 North Main Street for 20 years, starting in 1934 and in 1936 or 7 partnered with Joe Trau to sell farm equipment on Nine Mile Point Road.

He was a member of the Masonic Lodge, Fairport Fire Dept., Grange, trustee of Raymond Baptist Church, and active in the Rotary. The Chamber of Commerce honored him as the Citizen of the Year and the pavilion at "Fairport Junction" is named in his honor.

Albert H. Knapp was the subject for one of the winners of the Perinton Historical Socity Scholarship Grant the 2013.