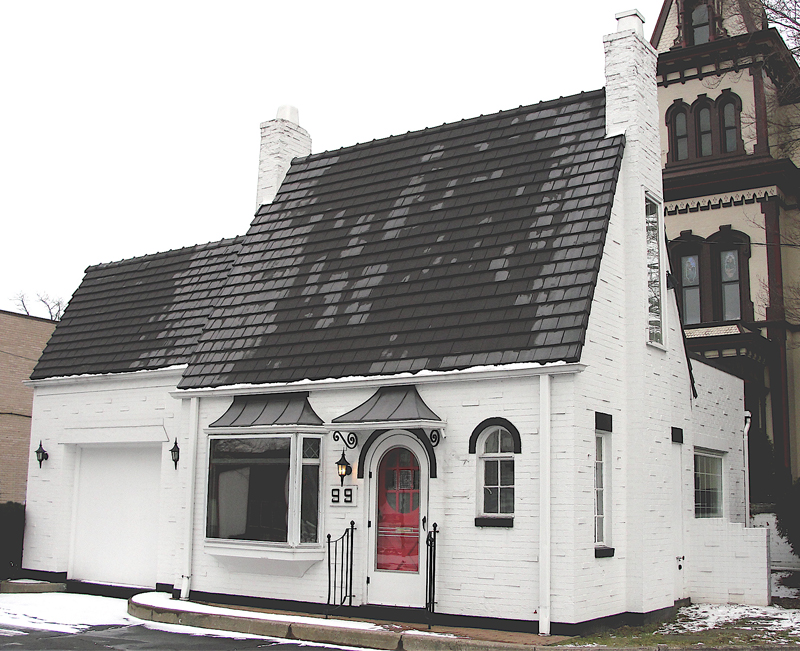 The immediately recognizable little white building with the steeply pitched roof at 99 South Main Street was designated an historic landmark by the Fairport Historic Preservation Commission (FHPC) in January of 2013. It was built in 1934 on land leased to the Pure Oil Company by the owners of the Green Lantern during the Great Depression. It functioned as a gas and service station until 1961, when a change in ownership led to a series of business ventures in the building. Most residents may recall the building as the home of the Slocum-Lauder Insurance Agency for many years.  The current owner (as of Sept. 2012) is the village of Fairport’s Office of Community and Economic Development (OCED).

The building is an excellent example of the Pure Oil corporate design for gas stations developed by architect Carl August Peterson, first used in 1927. Referred to as "English Cottage", the design features a covered bay window with leaded glass, a canopy over a stylized front door with rounded top. The door has nine-paned oval

The building was built in 1934 on land leased from the owners of the DeLand House during the Great Depression. 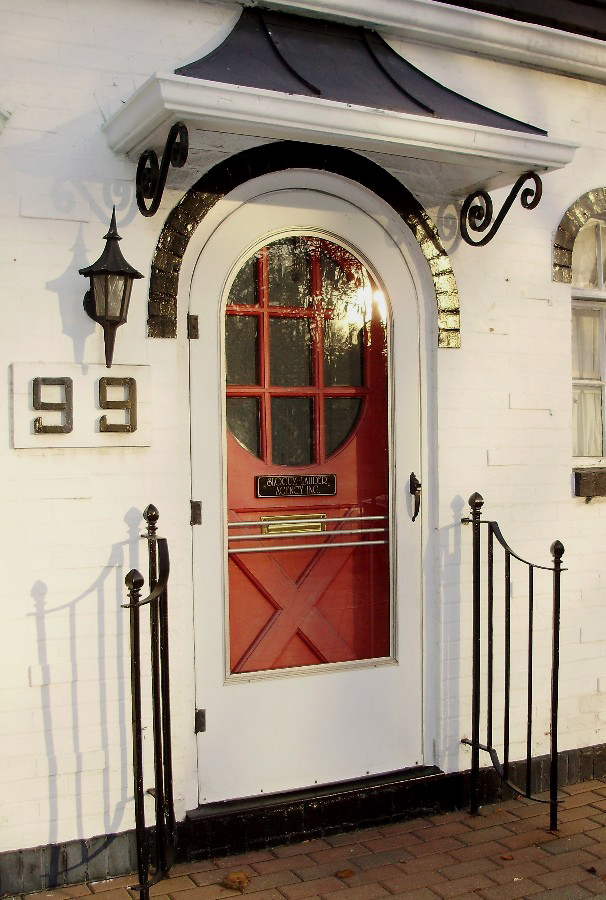 window in the upper portion. An additional small window compliments the shape of the front door. Gently curving wrought iron railings, painted brick exterior walls, and brick chimney are additional features of the "English Cottage" design. The roof tiles are painted black, over the original "Pure Oil blue" glazing. The tiles were manufactured by the Lodowici-Celadon, of terra cotta.

The building meets three of the five designation criteria according to the Fairport Preservation Local Law. The prominent location and unique design makes the building stand out on the busy corner of Main and Church Streets. Carl August Peterson, nationally known for his work in this field, and referred to as “the father of modern service station architecture”, designed it.

The rounded top front door with canopy has nine-paned oval window in the upper portion.

It also possesses special character of historic or aesthetic interest. The building’s design has been considered symbolic of the cultural changes which occurred with the huge growth of the automobile in the early 20th century, and the impact the auto had on the lives of Americans, their means of transporation, their neighborhoods, and streetscapes. At least two structures of this design in other locations are listed on the National Register of Historic Places. 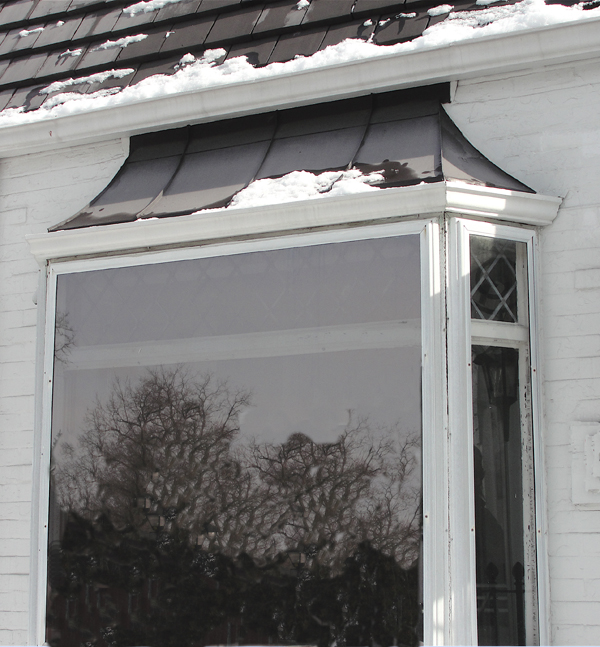 Jim Unckless, chairman of the OCED’s Board of Directors said, "We were pleased to have the Pure Oil building designated as a historic landmark. Our intent in purchasing the building was to preserve its history, and seek proposals for its best use. The building sits on property that functions as a gateway to the Village, and we felt it is a critical piece to future development on the four corners."

A small window on the right compliments the shape of the front door.

The building features a covered bay window with leaded glass, a canopy supported with wrought iron brackets over a stylized front door with rounded top. 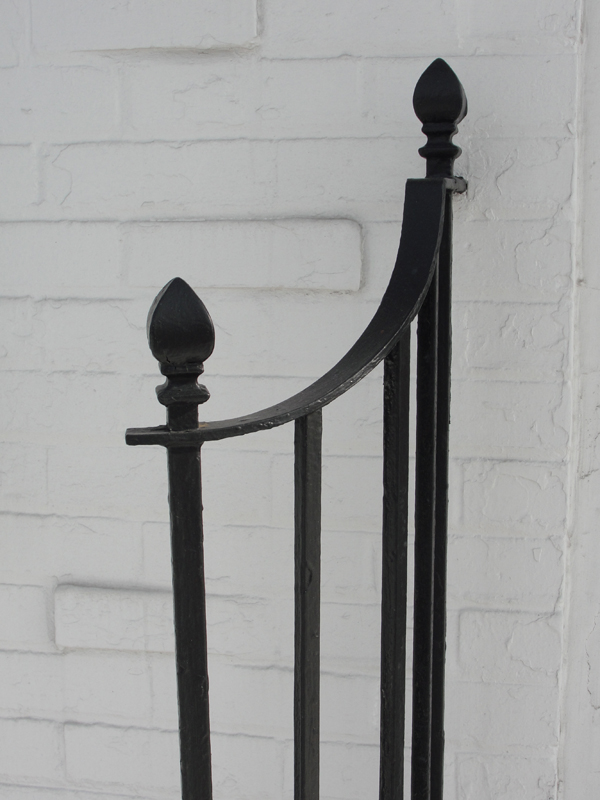 Gently curving wrought iron railings are just one feature of the "English Cottage" design found in many of the Pure Oil Stations across the country. 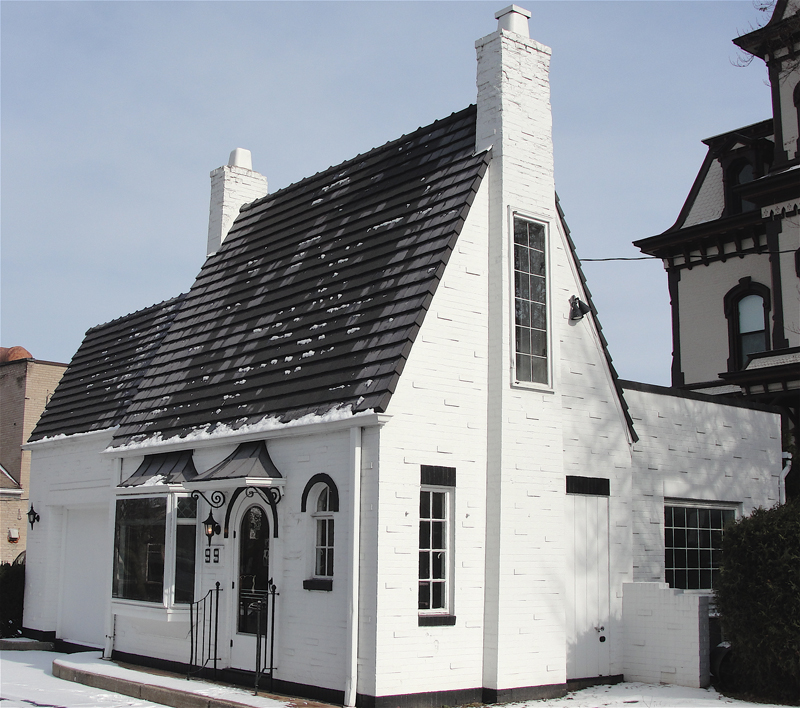