The Fairport Historic Preservation Commission (FHPC) designated the Parker Street Bridge an historic landmark in the village of Fairport in 2012. The bridge was built in 1912, one hundred years old when designated. It is two years older than its' partner bridge, the Main Street Liftbridge, which is also a designated landmark.

Building of the Bridge 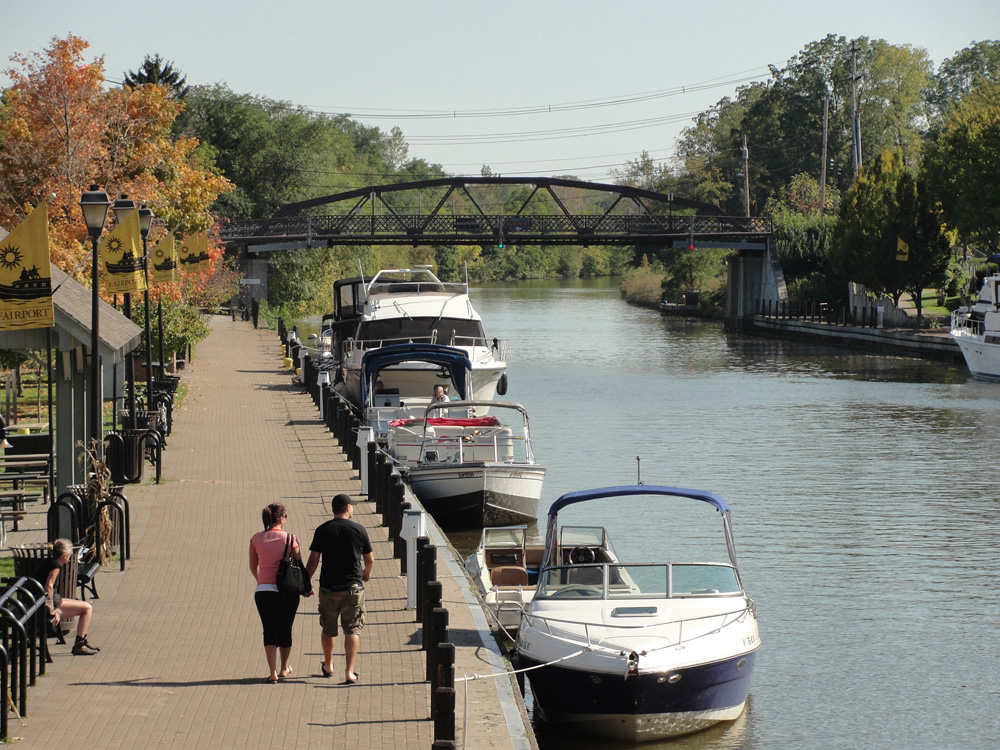 The bridge is a Warren Pony Truss Bridge. It was built on land that was originally owned by A. B. Parker, one of Fairport's early grocers. This bridge is not the original bridge on Parker Street. In 1867, 100 citizens of Fairport petitioned the state for a bridge. It is generally thought that this was done to provide an alternate way for emergency vehicles to cross the canal. New York State (NYS) authorized it to be built in 1867. Expansion of the canal required a new bridge to be built in 1912.

Parker Street Bridge, built 100 years ago, can be viewed from its' partner bridge, the Main Street Liftbridge.

William Russell Davis, Chief Designer and Inspector for Bridges, in NYS, is credited with designing the bridge. The Lackawanna Bridge Company from Buffalo NY fabricated the steel superstructure and related parts, while H. S. Kerbaugh, Inc. built the concrete substructures as well as the approaches. It is thought that once the substructure work was ready, that Lackawanna erected the trusses, floor beams and stringers, and then Kerbaugh or a subcontractor finished it.

The bridge originally had wood railings and wood planks. These were most likely replaced with steel in the 50's. Maintenance and upgrades to the bridge were done in the 80's, 90's and in 2002.

The height of the bridge is 11 feet, 6.25 inches. The overall length is approximately 120 feet. The bridge length is 100 feet 3 inches, and center to center of the trusses is 19 feet 6 inches. From inside to inside of the wheel guard is 16 feet 8 inches. The walkway is 6 feet 8 inches wide.

The bridge is/was the location for a local sport called "scum jumping". The most memorable tale about the bridge described a local "sport", a rite of passage called "scum jumping". It was a summer activity shared by many local teens. It involved the jumpers and the audience assembling at the bridge. The jumpers mounted the railings, held on to the girders for balance, and when their courage was up, or the jeers and shouts to jump were sufficient, each would leap off the bridge into the canal below.

Some did this but once, to prove their "image" was safe, if not enhanced. It was a Fairport ritual, along with "cow-tipping" at the "smelly/stinky farm", and was repeated each year by yet another group of teens. Along with the jumping, came the tales of someone diving into the carcass of a dead cow or horse. This part of the story is unproven at best. 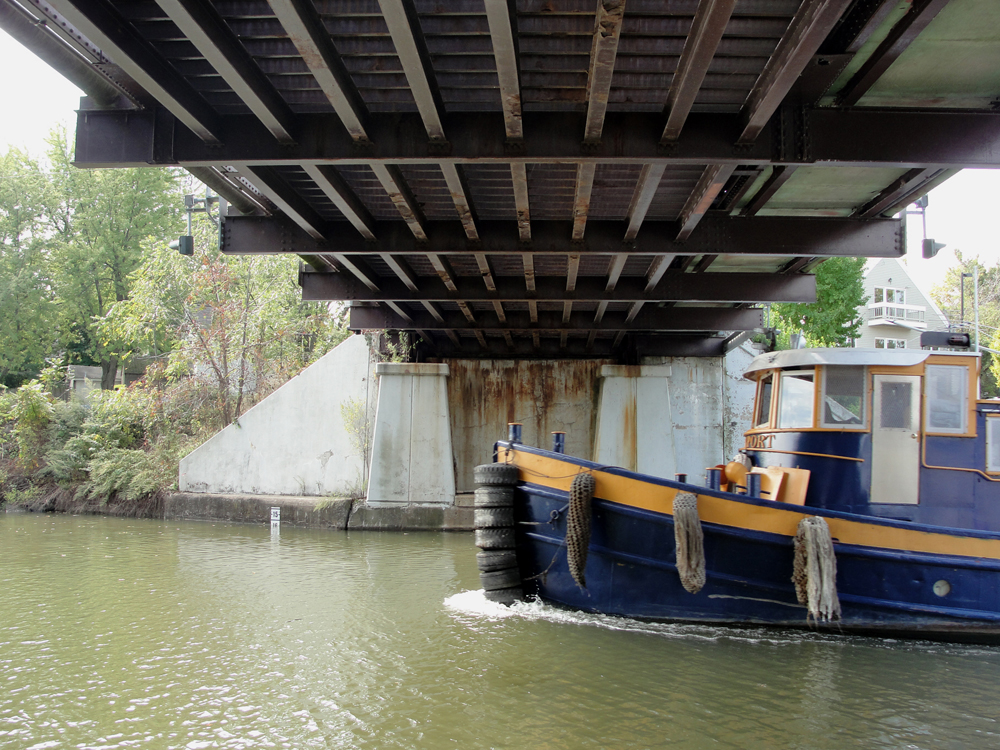 William Russell Davis, Chief Designer and Inspector for Bridges, designed the bridge while working for NYS. He went into private practice and consulting and in about 1919. He was part of a three man firm that submitted plans for the San Francisco Oakland Bay Bridge. Davis was also a consulting designer for the Peace Bridge.

Henry Swope Kerbaugh was awarded the contract to build the bridge. Kerbaugh was a builder of bridges and dams in PA, NY, and NJ. In 1900-1902, Kerbaugh's company built the western half of the famous Rockville Bridge, in Harrisburg, PA, which is on the National Register of Historic RR Landmarks.

The drop end bays smooth out the roadway and raise the bridge up over the center of the channel to accommodate the canal traffic. 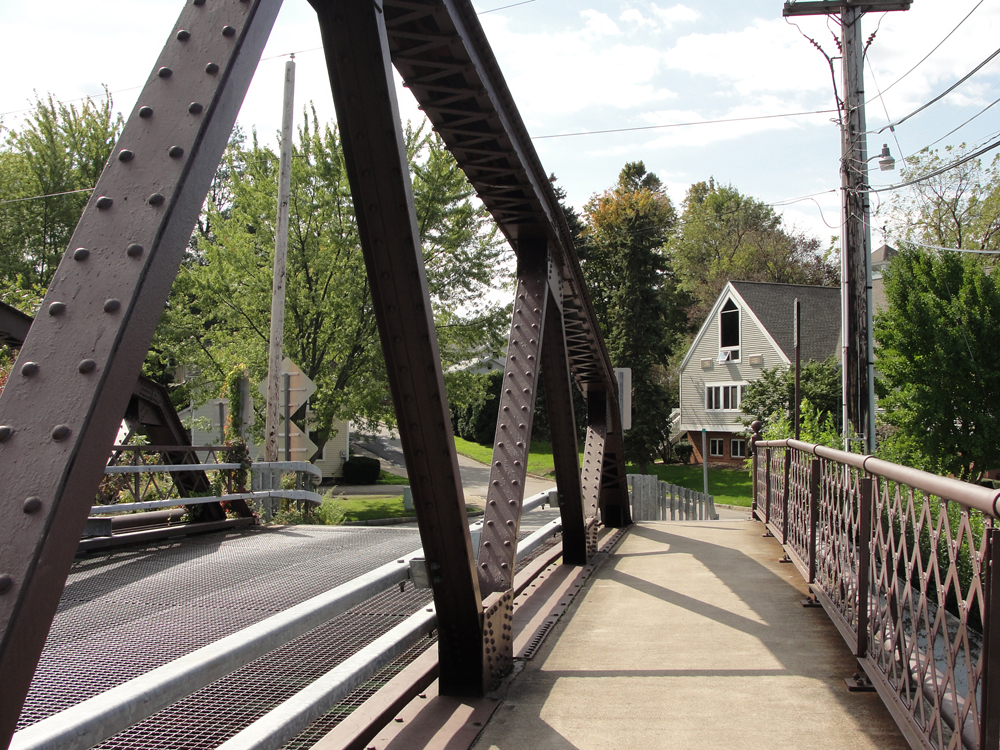 The bridges in Albion, Pittsford and Brockport are all Warren Pony Truss Bridges. This type of bridge is actually quite common, however, details of the Parker Street Bridge contribute to its uniqueness. Distinctive features of the bridge include; the upper chord is at a varying height with the lower chord approximating a curve; the drop end bays smooth out the roadway and raise the bridge up over the center of the channel. The bridge also has a steel stringer span that passes over what was originally the canal towpath. This feature is not uncommon, but many were eliminated in the 1930's.

The bridge originally had wood railings and wood planks. These were most likely replaced with steel in the 50’s. 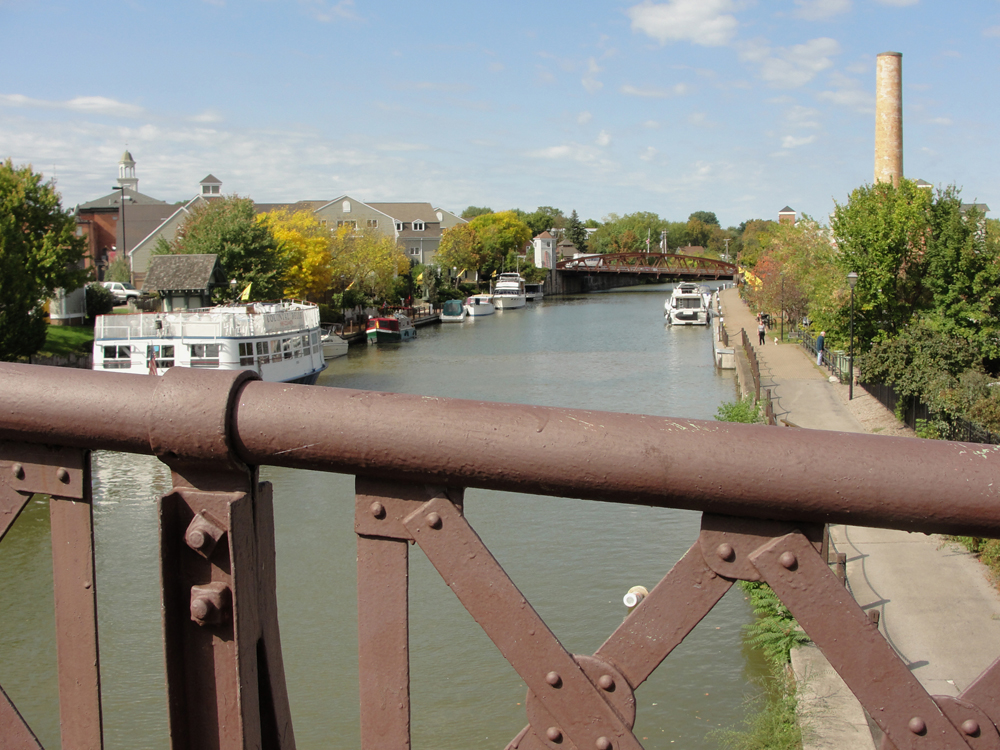 View from the Parker Street Bridge to the Main Street Liftbridge. 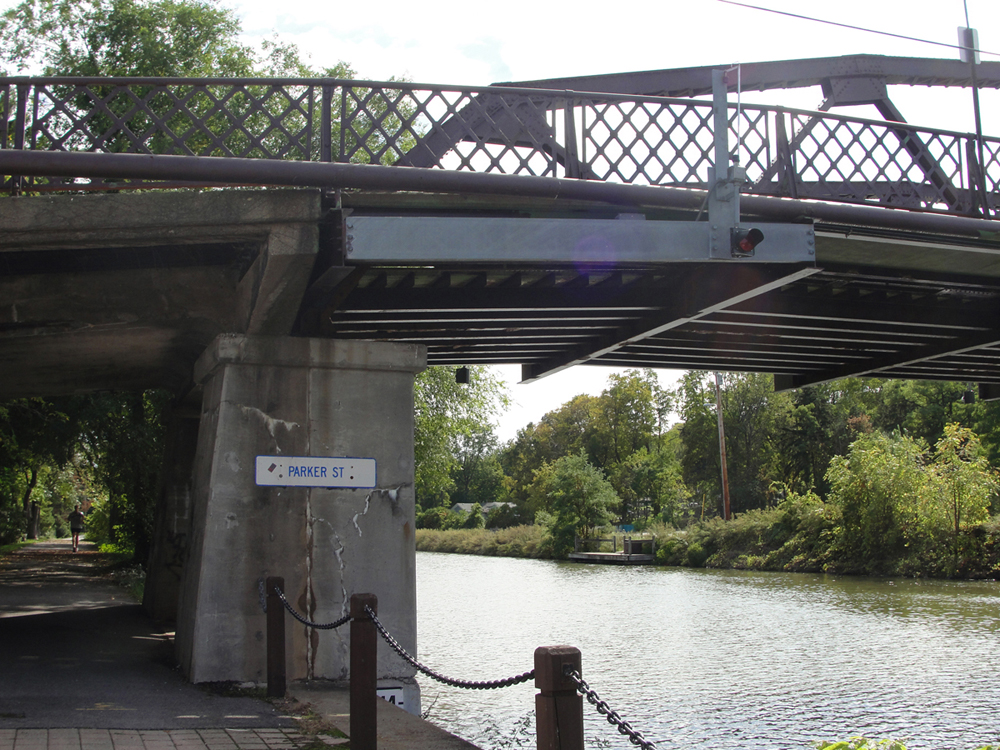 The bridge has a steel stringer span that passes over what was originally the canal towpath. 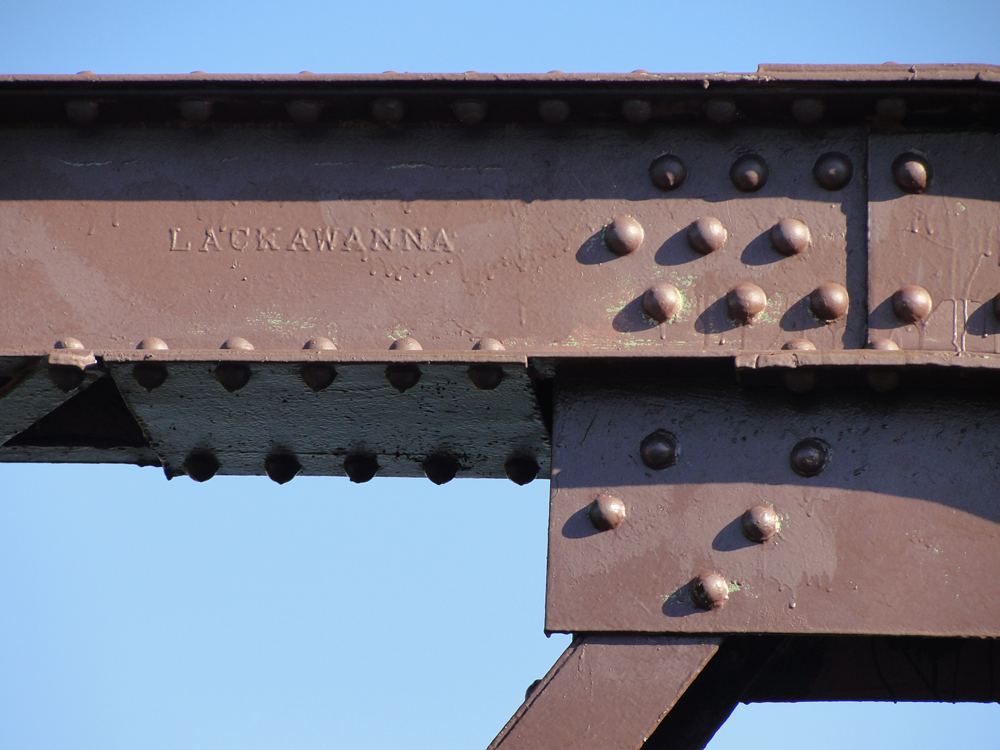 The Lackawanna Bridge Company from Buffalo NY fabricated the steel superstructure and related parts, while H. S. Kerbaugh, Inc. built the concrete substructures as well as the approaches. 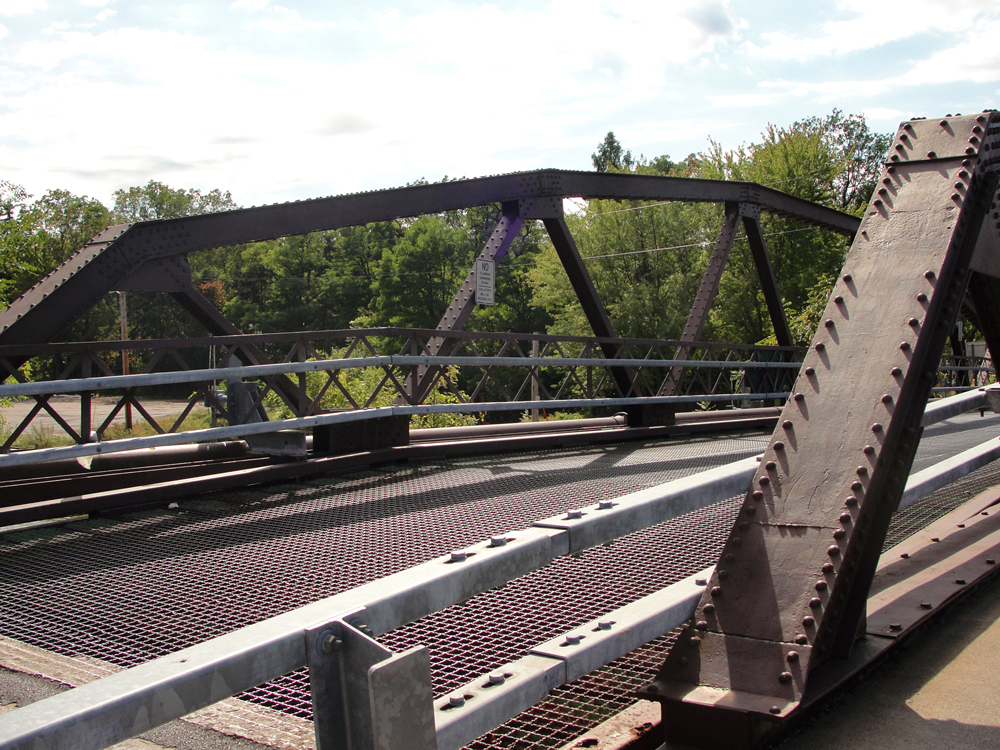 A distinctive feature of the bridge is that the upper chord is at a varying height with the lower chord approximating a curve. 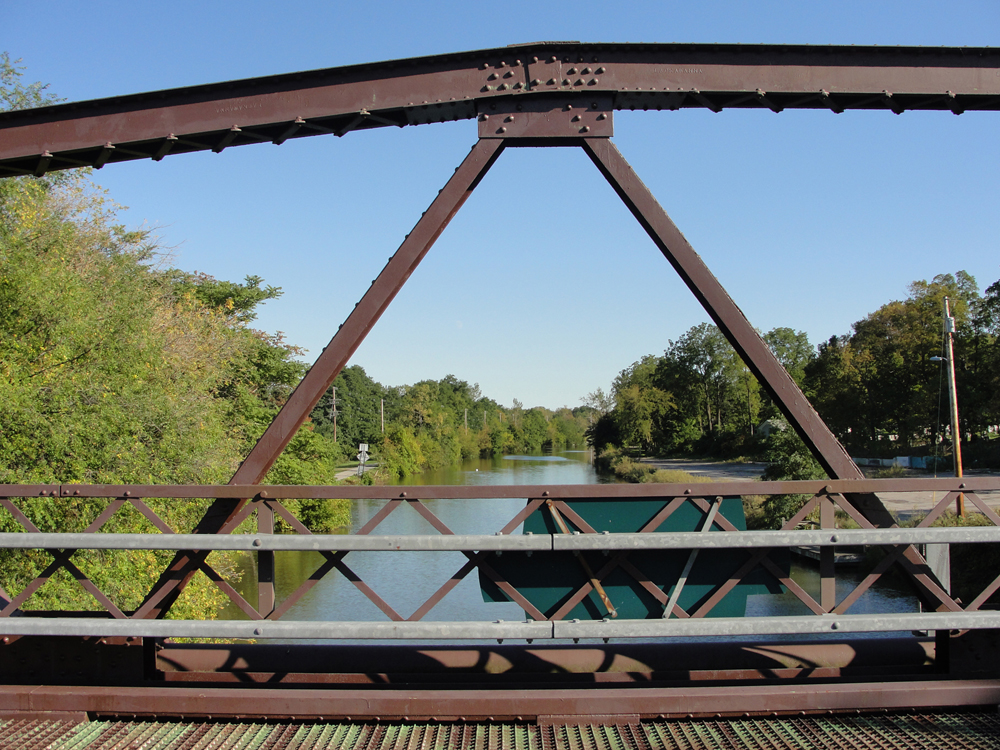 As defined by Wikipedia, "the warren truss was patented in 1848 by its designers James Warren and Willoughby Theobald Monzani, and consists of longitudinal members joined only by angled cross-members, forming alternately inverted equilateral triangle-shaped spaces along its length, ensuring that no individual strut, beam, or tie is subject to bending or torsional straining forces, but only to tension or compression."