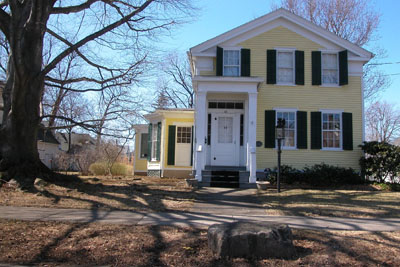 The Martin Wood house at 42 West Street has the reputation of being the best example of Greek Revival architecture in Fairport. It is described in Carl Schmidt’s book, Greek Revival Architecture in the Rochester Area and its photograph appears in Erie Canal Legacy by Richard O. Reisem and Andy Olenick.

Martin Wood was a local farmer and built the house in 1851. When designated in 2009, the owner, Rich Osterling, had made considerable efforts to restore the exterior: all paint has been stripped and the house repainted a color matching the paint of the 1850s. The Wood Farm extended from West Street to Woodlawn, which was named for him. He is credited with subdividing the building lots on West Street.

Also notable is that Charles Peacock, lived at 42 West Street from 1887 to 1909. He was Secretary and Trustee of the first school in Fairport.

42 West Street has many characteristics of Greek Revival architecture: wide cornice trim under the eaves, frieze band windows and front facing gable roof, as well as a bay window. 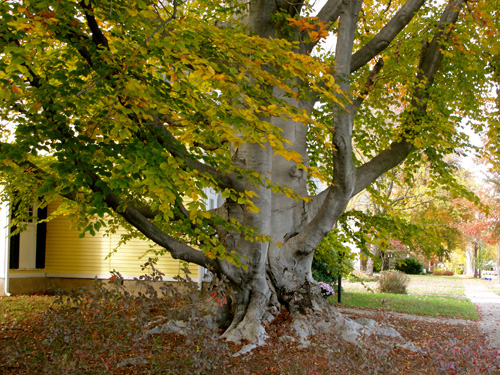 The windows are six over six pane sash windows with shutters. The front porch was replaced between 1887 and 1908 and matches the original porch. There is a full transom light over the original door with recessed sidelights.

The mounting block/carriage step located in front on the treelawn was designated along with 18 others located on Village property. The original barn was burned to the ground in 1904 and replaced with an attached garage.

A 100 to 150 year old copper beech tree was also included in the designation.

The Fairport Historic Preservation Commission designated this property a landmark in June of 2009. The copper beach tree in the side yard is included in the designation. It is between 100 and 150 years old and may be the largest in Fairport.

The front facing gable end gives
the house the appearance of
a miniature Greek temple. 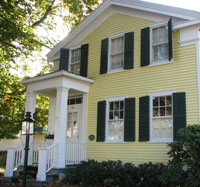 The frieze band on the Wood House
is discontinous across the gable end.

On the North and South side of
the home are frieze band windows.