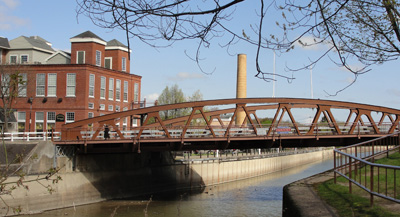 “One of Most Unusual Bridges in NYS”

In the 1976 survey of the Village of Fairport by the Landmark Society, the bridge was ranked in a category of “one of the most unusual bridges in New York State”, and having “great” importance to the neighborhood. The circa 1914 bowstring structure is a unique feature in the Village.

In 2009, the Fairport Historic Preservation Commission named Fairport's Main Street lift bridge a village landmark. The bridge was completed in March of 1914 and marks its 100 year anniversary this year. (2014)

The predecessor to the current bridge was an 80 foot long fixed bridge. In 1903, a decision was made to widen the canal to 125 feet, resulting in the replacement of bridges from the Hudson River to Lake Erie. Along the length of the canal, the widening occurred on the south side, leaving the towpath intact on the north shore. The current bridge is referred to as a bow-string truss type. It was designed by F.P. Williams and built by H.S. Kerbaugh Inc. for $75,000. 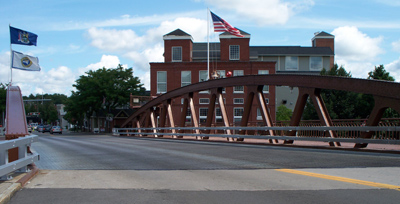 Several engineering problems existed with the replacement of the old bridge, primarily driven by elevation issues with the north and south approaches. The 1914 replacement bridge, 139 feet in length, incorporates an irregular 10 sided design, crossing the canal at an angle of 32 degrees from southwest to northeast.

Every angle of the bridge is unique, and there are no square corners on the bridge floor. The original decking was wood, which long ago was replaced with steel grating. Fairport's historic lift bridge was threatened with replacement in the 1970s, when a plan was considered to build a new bridge that would span high above both sets of railroad tracks that existed at the time, as well as the canal.

At the time, the lift bridge needed extensive repairs, and the community was divided regarding the choices of repairing or replacing the lift bridge. Ultimately, the bridge was renovated, and growing traffic congestion was addressed by replacing the single-lane canal bridge at Turk Hill Road.

The bridge has cultural significance as the latest of a series of bridges crossing over the Erie Canal at this place since the canal opened in 1825. The local historic designation in December of 2009, includes the bridge control house and the stairs on the east side serving the canal towpath.

No Two Angles the Same

The bridge has no two angles the same and there are no square corners on the bridge. The 139 foot long bridge was built with a 4% grade and a 32 degree skew to the canal it crossed. It was rehabilitated in 1988. The original decking was wood which was replaced with open steel grating. 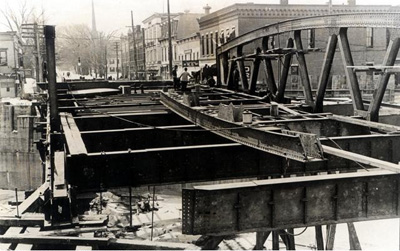 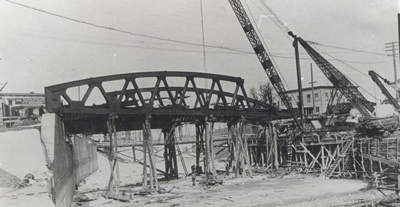 The photos to the left show the building of the bridge in 1914.
Provided by the Town Historian. 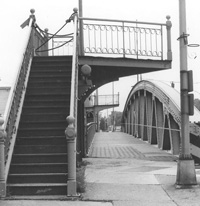 Photo of the stairs on the east side from the 1976 Landmark Survey.

Stairs on the east side. 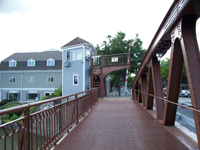 Note: In 2014, the Liftbridge in Fairport was 100 years old. Bill Poray, editor of our newsletter, the Historigram, has edited an excerpt from an article by Charles R. Waters and published it in the May 2014 Historigram. Mr. Waters who was one of the engineers engaged in the Barge Canal work in Perinton, wrote a detailed article describing Fairport's lift bridge. It was originally printed in a trade journal, Engineering News, shortly after the completion of the bridge in 1914.

To read the article, download the May 2014 issue of the Historigram.

All photos taken in 2009 unless noted.