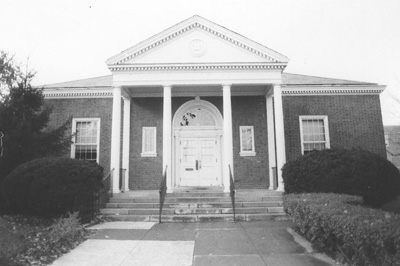 In 1976, the Landmark Society of Western New York did a survey of buildings in Fairport. The survey stated that 18 Perrin Street was "perhaps Fairport's only distinguished public building."

The building is owned by the Village of Fairport and leased by the Village at no charge to the Perinton Historical Society. It was the first structure to be designated a landmark by the Fairport Historic Preservation Commission (FHPC) under the local proeservation law in 2008. In 2017, the former Fairport Public Library was listed on the National Register of Historic Places.

Fairport resident, Henry Martin, an architect in the firm of Wiard and Martin, designed the library. His wife Helen Martin was the active head of the library during WWII and continued to work there until the early 60's. In the depression years of the early 30’s funding was scarce for public buildings. Robert Douglas, philanthropist and founder of Fairport's Pectin Company, gave 500 shares of Pectin stock to build the Library. After the stock market crash in 1929, the stock wasn't worth enough to build the library.

The Perinton Patriotic League had $10,000 dollars, which had not been used to help support WWI veterans. They decided to donate this money to help build the library. This is the reason for the dedication plaque in the front foyer to the WWI veterans from the Fairport Perinton area. The Works Progress Administration (WPA) donated the labor to build this building. It's the only WPA building in Fairport or Perinton.

Built in the Neo - Classical or Georgian Revival Style 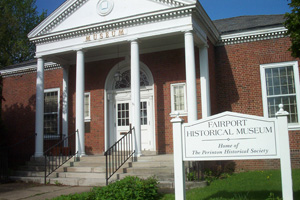 The Fairport Historical Museum is built in a Neo-Classical or Georgian Revival style with four un-fluted columns on the front porch. The doorway has a circular fanlight with 2 fluted Corinthian columns on each side. At the top of each column are acanthus leaves.

The brick is from Virginia and the size of the brick is larger than normal, which was done to make the overall impression of the building seem smaller. There is a fanlight transom in brick over each window. The slate roof is of Bangor slate from Pennsylvania. The drainage gutters, called Yankee gutters, are built into the roof to prevent icicles from forming.

Local artist, Carl Peters, was chosen to do the mural in the library/historical museum. Part of Franklin Roosevelt's economic recovery in the 1930's was to hire artists to do artwork locally. There were two Federal WPA art projects in Fairport; the bronze plaque in the old Fairport Post Office was one and Peter's mural was another. Peter's mural was designed for Fairport. It shows the canal and local

Since 1979, The Perinton Historical Society has maintained and operated 18 Perrin Street as a museum. The community is fortunate to have the Society's dedicated commitment to preserving this building.

The Perinton Historical Society received the Landmark Society of Western New York's Historic Preservation Stewardship award in 2001 for their efforts to preserve this building. The care the Society has given this building has made it much easier to designate it as a landmark.

For information on the FHPC and locally designated landmarks, go to the village preservation page or the village website.

The Fairport Public Library, now the Fairport Historical Museum was listed on the National Register of Historic Places in 2017.

Landscape Concept by John Wenrich circa 1935

Download the Fairport Herald -Mail about the "How 'n Why on Growth of Library..." July 1949