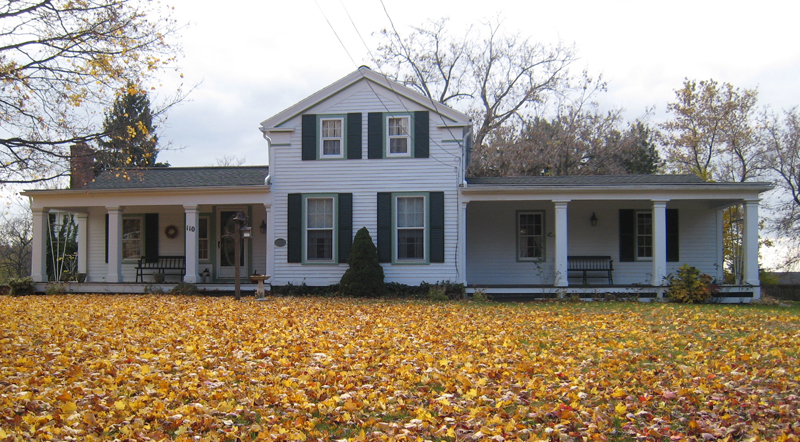 When refering to the Filkins - Carroll house on Hulburt Road, one needs only to say, "the house on the hill" and Fairporters all know which house you are talking about. As you travel up the hill and turn the corner you see the house there - a Greek Revival home on a beautiful spot on the hill crest. In 2012, the Fairport Historic Preservation Commission designated the Filkins-Carroll House at 110 Hulburt Road a village landmark.

In the early years of Fairport it was not uncommon to have a house moved from one area to another. In 1954 this house was moved by the Volney Mosher family to save it from being destroyed to build the Minerva DeLand School. A photo of a house being moved is rare, but the move was published in the local paper. See photo on right.

The central and east wing of 110 Hulburt are in the Greek Revival style and dates to at least 1850. The home, owned by Stephen Burlingame appears on the 1852 Fellows map, but from tax information it may date to as early as 1830. When it was moved, the Mosher family removed the wood shingles and exposed the Greek Revival features.  The wide frieze board is now visible with frieze band windows on the east and west sides.  Each gable has a broken pediment.

Carl Schmidt, a local expert on Greek Revival Houses, designed the porch on the east side facing the road.  The style with the square pillars fits the simple design of this house.

The house is associated with 2 other families who made significant contributions to life in Fairport.  George Filkins, a Civil War veteran, lived briefly at the farm Hulburt Road; his family was there for years.  In the 1870's George began development of a large tract of land...now known as Filkins and George Streets.  He liked working with brick and is credited with building 160, 164 and 166 South Main Street.  He also built the Seeley Block at the corner of South Main and Cherry Streets (West Ave).  George made important contributions as an early developer in the village.

Charles Carroll moved to Fairport in 1960 and bought 110 Hulburt from the Moshers.  He was Village Justice from 1972-1976 and very active in Democratic Politics during the time of Urban Renewal in the 1970's.  The Carrolls added the west wing as a garage and duplicated the east porch on the west side, giving the house the appearance it has today.

The Filkins-Carroll House is an easily recognized landmark as it sits on top of the Hulburt Hill and overlooks the village.  Fairport is fortunate to have had a building with this much history saved for all to enjoy.

Newspaper clipping showing the house being moved in 1954 to 110 Hulburt Road. 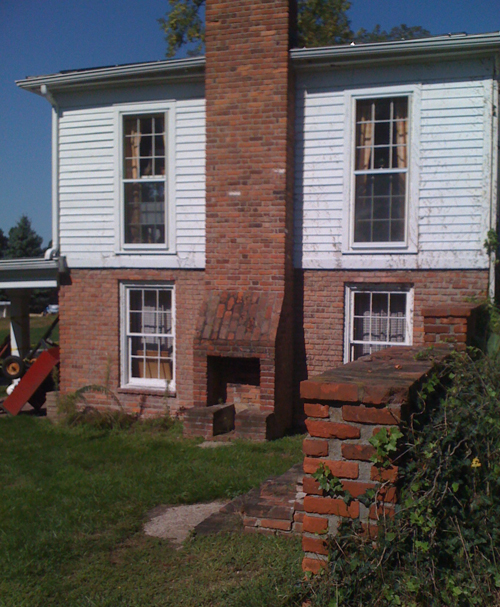