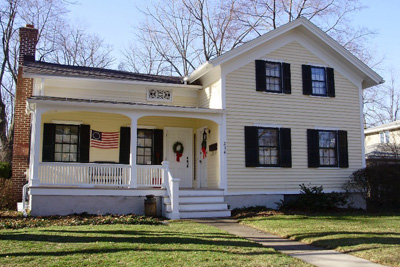 This early 1800’s 1½ storey farmhouse was built by Abner Wight, a veteran of the Revolutionary war—a “Minuteman” from Massachusetts- and one of Perinton’s earliest pioneers. The house is one of the first erected in the village of Fairport, and shows elements of both the Federal and Greek Revival styles.

It was designated a local landmark in 2009 by the Village of Fairport Historic Preservation Commission (FHPC) for both "architectural and historic importance”.

The main part of the house suggests a Federal style, probably dating from 1815 or a bit earlier, when sawn lumber was available for construction in the area. The southern portion of the house, which was probably built later, features Greek Revival characteristics, including a wide frieze board with window and iron ornamentation, located just above the front porch.

Interior features include half hewn timber supports throughout the cellar and attic. Timbers are mortised and tenoned together, and joints are interlocked with original wooden pegs, or “tree nails”. The second floor has slanted ceilings throughout, with wide pine plank floors, batten-type doors, and wrought-iron thumb latches-all original-indicating early colonial design. Original woodwork can be seen in the first floor parlor. 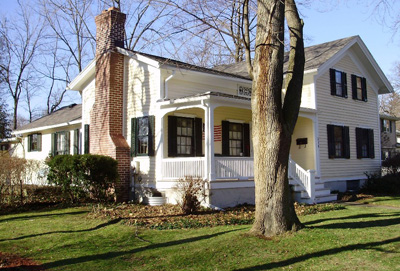 Abner Wight married Huldah Perrin, sister of Glover and Jesse Perrin (after which the town of Perinton is named). Wight first built a log cabin on the east side of South Main Street, approximately at the location of 249 South Main today. The house was moved to its present location sometime in the mid 1800’s. It was later the home of Col. S.P. Howard, a prominent Civil War veteran and respected member of the community.