William H. Boyland or Boylan, was born in Parma N.Y to parents Hugh and Louise Boyland. He lived on his parents’ farm with 6 siblings. He received his education in the county schools in Parma and West Greece. After his boyhood days were over at the age of 16, Mr. Boyland went to work at the Hill Brothers in Penfield village and worked 3 years in what was considered a “model mill”.

In 1884, he came to Fairport and worked in the feed and flourmill of George W. Clark that stood where the Rochester, Syracuse and Eastern Railway Trolley Station stood (23 N. Main St.). Wood and Traver bought the mill from Clark, and Mr. Boyland remained with the new firm for several years, and then he went into the feed mill business for himself in Spencerport, NY.

His stay in that town was short, only two years. He came back to Fairport to live in approximately 1892. Shortly after returning, Boyland bought the Fairport Mill[2] as it was called then and continued business on North Main with a partner. He bought out the partner in 1901.[3] He bought feed of all kinds, bought wheat and manufactured pastry flour, which he sold at retail and wholesale. The wholesale business became large, shipping to New York City and Boston by the carloads.[4]

The mill building along with a barn was moved to John Street (11 State, now Lift Bridge) when the Rochester, Syracuse and Eastern Railway Company bought the property on Main Street. He continued business there until his death in 1935. The Boyland estate owned the building and equipment and the business was sold to C. H. Maier.[5] Much of the building was destroyed in a 1940 fire.[6] Mr. Maier’s business remained open, but it appears that he moved to a Main Street location near the railroad station.

In 1890, Mr. Boyland married Miss Belle (possibly Blanche) Dudley Westfall[7], the daughter of Mr. and Mrs. J. V. Westfall, of the village.[8] They started housekeeping in the Woodin house on Church Street [9] and then moved to Perrin Street. After two years spent in Spencerport they, upon their return lived in part of the Congregational Church parsonage with Rev. Charles Reeves. They then moved to 30 West Street[10], which they later purchased in 1910.[11]

While in Fairport, Mr. Boyland was superintendent of the First Methodist Sunday school for five years. He later joined the First Baptist church and for one term was one of the trustees. He also was a village trustee for one term in 1905/1906[12] and a member of the Masonic Lodge. Mrs. Boyland was involved in the Eastern Star. She also was involved in the Musical Club, sang at church events and offered her talent for weddings, evenings at home and funerals.[13]

The Conant - Boyland House and Carriage Barn at 30 West Street is a local designated landmark.

Individual stories about the owners of 30 West Street  can be found in the Personage section of this webpage or click the name below. 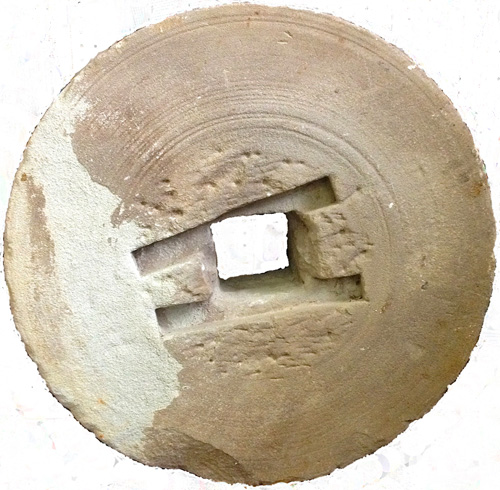 This millstone is called a top stone. It was mounted above another millstone with a small space in between.

Grain would be fed into the center hole and as the stones turned the grain would be ground into flour which would sift out the sides.

The Boyland Mill was a steam powered mill. It was owned and operated by William Boyland from 1895 to 1935. Originally located on the N. Main Street it was moved to allow for the construction of the R.S.& E. trolley station in 1911. It was then located at 11 State Street. The mill was destroyed by fire in February of 1940.

The millstone can be viewed at the Fairport Historical Museum. 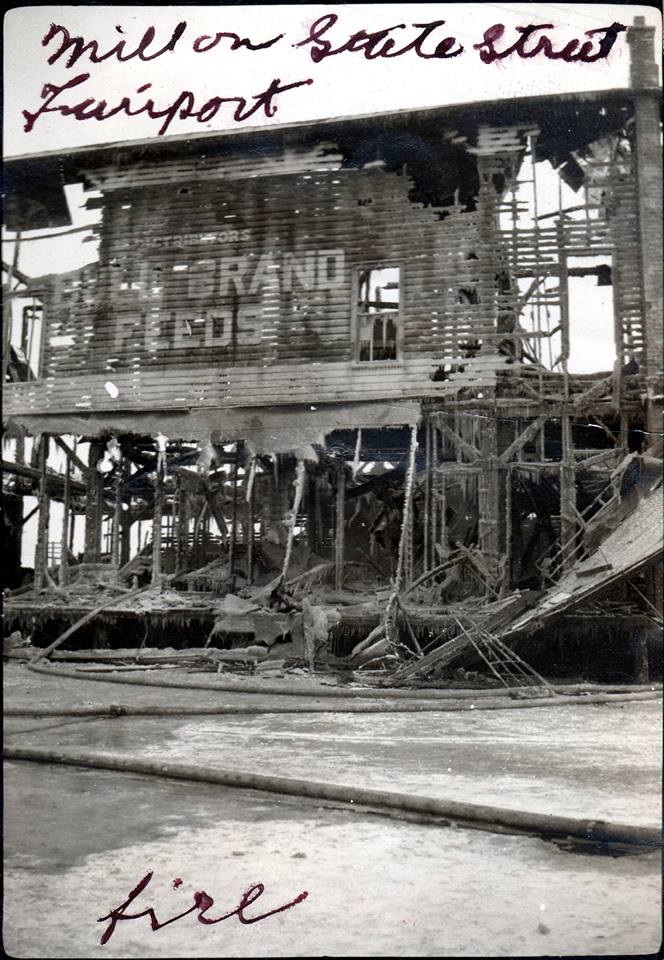 Image of the aftermath of the fire at Boyland Mill.