Minerva Parce was born in North Pitcher, NY, on April 19, 1829. Her father, Justus Parce, was a manufacturer of saleratus and a well-known businessman. In 1845 he moved his business from North Pitcher to the Chenango County seat, Norwich NY, where he continued to prosper.

In the mid-nineteenth century packet boat travel was promoted in much the way cruise ship travel is today. Posters proclaimed the benefits of traveling comfortably along the Erie Canal, enjoying the countryside, the exposure to fresh air and the beauty of nature. For those with money it was an idyllic way to travel. The Parce family took such a trip, on a packet boat captained by Daniel DeLand, of Fairport NY. Over the course of the journey 19 year old Minerva and 25 year old Daniel fell in love. They were married on Christmas Day, 1848.

The DeLands began their married life in Wisconsin, where their son, Levi, was born. They were unhappy in the far west and, in 1850, returned to New York State, to Norwich, where Minerva’s father, Justus Parce, ran an ashery. Daniel apprenticed himself to his father-in-law and learned the manufacture of potash and saleratus (baking soda). In 1852, shortly after the birth of their second child, Leora, the DeLands moved to Fairport to begin their own business, D.B. DeLand & Co.

D. B. DeLand & Company was a true mom and pop operation. Daniel traveled around the countryside buying wood ashes from farmers who were clearing their fields. He carted them home to Minerva who, with a servant girl, purified them and packaged them for sale as saleratus. Daniel then went out and sold the finished product.

They were highly successful. Their first year’s sales were about $1,000. Henry DeLand, Daniel’s younger brother, joined the company as head salesman. Minerva’s brother, J.Y. Parce, was the resident engineer. Within two years the company had outgrown Minerva’s kitchen and was operating from a factory on North Main Street, just north of the Erie Canal. They were selling $9,000 worth of household chemicals a year. Minerva’s time as an active participant in the company ended, although she remained a trusted advisor to her husband and, later, to her son Levi.

In 1856 Daniel and Minerva built a new house at the corner of West Whitney Road and North Main Street. The house overlooked an extensive park and gardens which were laid out between the DeLand home and Minerva’s brother’s house at 137 North Main Street. The park was filled with rare trees, shrubs and flowers which Daniel DeLand collected on his travels. Three more children were born in that house: Minerva (1856), Stella (1863) and Wayland (1866). Minerva’s life became that of a well-to-do matron. She raised her children, volunteered at her church and was a member of the Chautauqua circle.

In 1872 Daniel DeLand died, leaving his 43 year old widow and five children behind – the youngest six years old. In the thirty years that followed, Minerva became an active member of her community. She helped raise funds for the construction of the First Baptist Church, which still stands at the corner of Main and Church Streets (the Rose window is in memory of her husband). She taught Sunday School there and for many years was visiting superintendent of Sunday Schools. She was active in both the local Ladies’ Missionary Society and the Monroe County Missionary Association. She was a member of the Rochester Orphan Asylum board and on the advisory board for the Mechanics Institute of Rochester (now RIT).

Her family continued to be important to her. Her mother, Betsey Parce, joined the household in the 1870s and remained there until her death in 1885. Her children grew and married. In 1873, Minerva built a house for her son Levi, and his family, at 176 North Main. In 1876, when her daughter Leora married, she built a house on the edge of DeLand Park as a wedding present. Stella married the Reverend James Dickinson and moved to New Jersey. Wayland became an engineer on the Great Lakes, though he maintained his home in Fairport. Her daughter Minerva died in 1892.

In 1902, Minerva Parce DeLand contracted typhus fever. She died five weeks later. Her obituary in the local paper, (which referred to her only as Mrs. D. B. DeLand) described her as one of Fairport’s most highly esteemed and beloved women and said “Devoted to her home and immediate household, her heart yearned after the whole human race, especially the sick and troubled, the sinning and the heathen. Countless ministries of loving service filled her life. She possessed a rare faculty of drawing people to her and winning their friendship and love.” 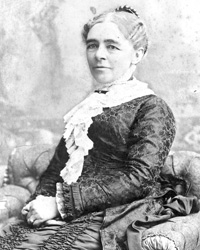