"Go Raiders!" would not be a cheer rooted in the Fairport Red Zone if it were not for Joseph Cummings. In fact, Fairport's sports would not be the same today if its physical education and sports programs were not touched by Joe Cummings. Cummings was involved in Fairport athletics for thirty-six years. However, Cummings was more than just a coach. He was a motivator, educator and an inspiration to every student he came in contact with. 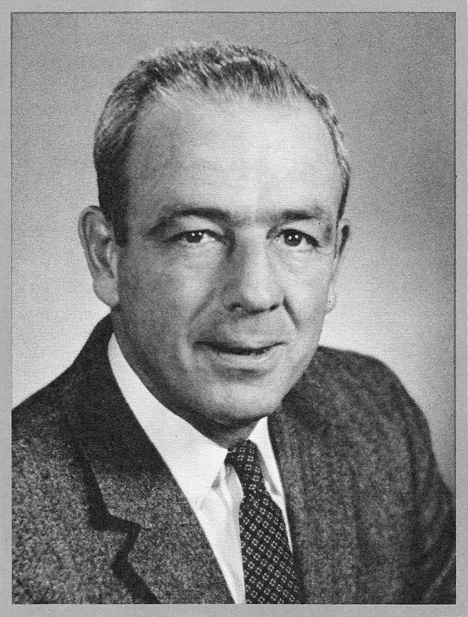 Cummings was born on October 27, 1911. He graduated from Cortland State College, where he lettered in football, basketball and track, with a Bachelor degree in science. He furthered his education during the summers at Columbia University where he earned his Master of Science degree. Cummings was one of twenty-seven physical education students across the nation to represent the United States at the Berlin Olympics in 1936. He was a representative of the International Sports Education Congress. He married the love of his life on November 22, 1939, Mary Reigal.

Reigal was a physical education inductress at Hamburg High School in Hamburg, New York. Cummings was a teacher and a coach at Fairport high school from 1936 to 1961. However, he took four years of leave to serve in World War II as a navy lieutenant. He became known as "the original red raider." He became Fairport's first athletic director in 1960 and retired in 1973.

During his time coaching and teaching he founded the Little Brown Jug, which was a friendly, competitive game between the Fairport and East Rochester varsity football teams. The winner of the game would be able to take home the brown jug until the following year. This tradition lasted forty-nine years. It ended when the skill level and weight difference between the two teams no longer was fair and competitive.

He is also the reason the yearbook in 1952, coined the term "Fairport Raiders" when talking about the sports teams. Under Cummings, the football team won County Champions or were Co-Champions for seven seasons. As the Rotary President, he helped to initiate a recreation program in Fairport. He also helped to establish the Monroe County High School hockey league in 1968. Joe Cummings was able to accomplish a lot for Fairport's athletics during the thirty-six years he was a coach. 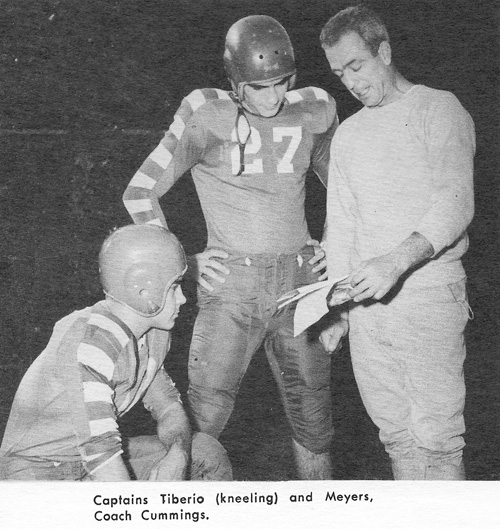 Cumming’s enormous efforts and outstanding accomplishments have not gone unnoticed. He has received several awards such as the Rochester Club Distinguished Service Award in 1950, the Touchdown Club of Rochester Football Award in 1961, the IAABO Board Coach Award in 1966 and the NYS Coaches' Association Special Honor Award in 1970. Cummings has also been inducted into both the Monroe County Athletics Hall of Fame, and the SUNY Cortland Hall of Fame.

Joe Cummings died on November 13, 1993. The Fairport community was so grateful for all that Cummings had done for their athletics that the football field was named in memory of him on September 10, 1994.

This image was taken from the 1954 school yearbook. The caption reads, "Captians Tiberio (kneeling) and Meyers, Coach Cummings."

Cummings has made a lasting impact on the Fairport Community and will never be forgotten as his name is on a plaque down by the turf in memory of him and his great accomplishments. Whenever the cheer "Go Raiders!" is heard, the accomplishments of the "original Red Raider" are still thriving.

The caption in the book read as follows:

We, the Class of 1966, dedicate this yearbook to you, Mr. Cumming, because you have been such an inspiration to us throughout our high school years. You have taught us something we cannot learn from books. You have taught us to be good school citizens, to help our teams out when they need us the most. Most important, you have taught us what it means to have Fairport spirit. Because you have shared unselfishly your own dynamic spirit, we have become better persons. Your forcefulness at pep assemblies makes us proud to have such a wonderful person as you behind us. This is but small tribute to your indomitable spirit. 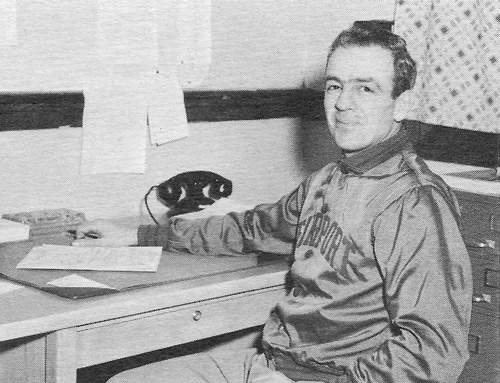 Coach Cummings in his office in 1954. The photo was taken from the high school yearbook.

The Fairport community was so grateful for all that Cummings had done for their athletics that the football field was named in memory of him on September 10, 1994.