Daniel DeLand, who was born in Tioga County, NY, went to sea as a young man, working on a whaling ship. He eventually decided to leave the whaling life and, attracted by the business boom which followed the opening of the Erie Canal, returned to central New York State to work on the packet boats plying the Canal. Because his father, Levi DeLand, had moved from Tioga County to a farm east of Fairport, Daniel made Fairport his home as well.

In the mid-nineteenth century packet boat travel was promoted in much the way cruise ship travel is today. Posters proclaimed the benefits of traveling comfortably along the Erie Canal, enjoying the countryside, the exposure to fresh air and the beauty of nature. For those with money it was an idyllic way to travel.

Daniel worked hard and eventually became the captain of a passenger boat traveling between Albany and Buffalo. The Parce family, from Norwich NY, traveled on Daniel’s boat. One of the passengers on that journey was 19 year old Minerva Parce. The two fell in love, married in 1848, and moved to Wisconsin where their first child, Levi Justus, was born.

Potash and saleratus are made from hardwood ashes, a product readily available in an area where farmers are clearing land and preparing it for the plow. When trees are cut down they can be used for construction – first to build log cabins, then, when lumber mills are available, sawn into boards for the construction of houses, barns etc. Rails are used for fences, the wood provides fuel for heating and cooking. There is, however, little use for stumps. Western New York was covered with virgin forest; the stumps were huge and almost impossible to remove. The common practice was to burn them out – creating plenty of ashes.

The DeLand Company began as a “Mom and Pop” business. Daniel drove his wagon from farm to farm collecting hardwood ash. He supervised the leaching and purifying process ; his wife and her helper packaged the finished product in their kitchen, which Daniel then sold.

The company moved from the DeLand’s kitchen to a Main Street factory on the north bank of the Erie Canal in 1854. They changed the name of the company to the DeLand Chemical Company. Henry DeLand, Daniel’s younger brother, joined the firm as a salesman, a very successful salesman. Eventually Henry, and the sales force he assembled, were selling $9,000 worth of DeLand household chemical products each year.

In 1859 Joseph Yale Parce, Minerva’s brother, joined the firm as factory manager and resident inventor. His joined-arm crane greatly streamlined the cargo-handling aspect of the DeLand Chemical Company, which used the canal to ship DeLand products to the east coast, via the canal, and to the mid-west, via the canal and the Great Lakes. DeLand Chemical’s household products were found throughout the country.

Daniel was a strong proponent of modernization. He updated the equipment at the factory regularly, using his brother-in-law’s inventions whenever possible. His factory was divided into areas that concentrated on one product or one step in the development of that product. He installed an elevator in the factory. 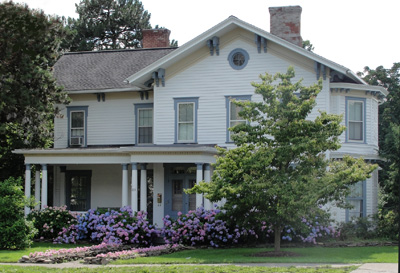 An Italianate house at the corner of North Main Street and Whitney Road (185 North Main St.) was the centerpiece of Judge DeLand’s farm.   An elaborate garden of rare flowers and trees, modeled after gardens the DeLands had seen in Europe, extended from their house, along Main Street, south toward Joseph Parce’s house at the corner of Parce Avenue. The grounds included a windmill, a gazebo and a summer house.

By 1872, the DeLands had invested a quarter of a million dollars in their business. They employed over 100 people in the factory and many more as salesmen and packagers. An article in the Rochester Union & Advertiser in July 1872 stated “Fairport, a thriving village of 2,000 owes, if not its actual existence, at least its increase and prosperity to one large industry, that of D.B. DeLand and Company, manufacturer of saleratus, soda, cream of tartar and superior baking powder.”

One evening, after working late at the office, Judge DeLand headed home. He intended to take the elevator down to the first floor. For some reason he did not realize that the elevator car was not in place. He stepped into the empty elevator shaft and fell to his death. He was 49 years old. 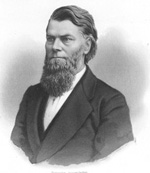 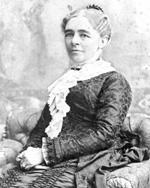 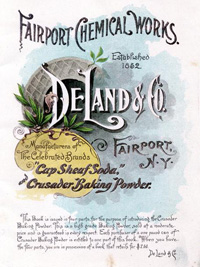 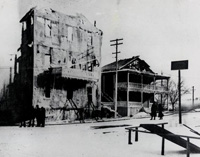 A disastrous fire in 1893, leveled the factory and although the company rebuilt, due to increased competition and rising costs, it was not able to sustain itself and closed in 1903.