His grave at Mount Pleasant Cemetery in the village of Fairport is as modest as can be. At times the flat marker is obscured completely by the fallen needles from a towering pine tree nearby. The man was as humble as the grave. A man of few words, yet a man who spoke volumes with his paint brush. 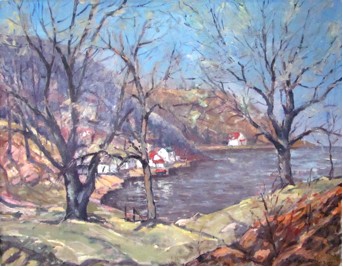 Carl William Peters was born in 1897, to German immigrants residing in a modest house on Caroline Street in Rochester. His father worked as a mechanic, repairing newspaper presses. When Carl was about 12 years old, his father’s employer suggested it would be a good time for him to retire. His parents scraped together the down payment for a little fruit farm on a dirt road in Perinton, recently renamed Jefferson Avenue, formerly Basket Street. Carl and his five brothers and sisters would quickly learn about life on a farm.

Even as a child, it was apparent that Carl had a raw talent for drawing. With his parent’s support, he quit high school to concentrate on his chosen vocation. He enrolled in drawing classes at Mechanics Institute, the predecessor to Rochester Institute of Technology. He also labored on the family farm, and in a Rochester art studio that created large canvas scenery backdrops for theatrical productions in New York City. As a junior member of the staff, he carried buckets of paint to the senior artists, and did some painting himself. He rode his bicycle the seven miles from the Jefferson Avenue farm to the studio on Halstead Street.

This Carl Peter's painting from 1953 is of Irondequoit Bay.

Carl was consumed with his chosen profession. While continuing at the scenery studio and his classes, young Peters honed his skills working for the Stecher Lithography Company, as a designer of postcards. At the age of 19 he earned his first significant prize, for the best poster representing the Rochester Pure Food Show. Shortly after, a new opportunity presented itself. Many artists travel to France to practice their craft. Carl Peters did as well, as a private in the United States Army. His experience as a scenery painter served him well in France, where he was assigned as a camouflage artist.

Carl survived the war, and accelerated his artistic activities upon his return from Europe. In the early 1920’s, he studied in Woodstock, New York at the Art Students League Summer School. Here his artistic style was refined, in what some have described as a blend of impressionism and realism. The life’s work of Carl W. Peters was set. He would be an artist, every day, every year, for the rest of his life. Many in our community may not recognize the level of accomplishment of our Jefferson Road artist. Carl Peters became nationally known for his impressionistic landscapes when he won several prestigious prizes and awards. In 1932, he became the first artist in history to win a third Hallgarten prize, sponsored by the National Academy of Art. Today, two of Carl’s paintings reside in the permanent collection of the National Museum of Art in Washington, DC.

For an artist, national acclaim and prizes do not necessarily mean financial security. Married with two young children, it was during the 1930’s that Carl William Peters and many of his peers turned to government sponsored mural work, as a means of survival during the Great Depression. The Rochester area is fortunate to have several murals created by Peters. One such mural was commissioned for the new Fairport Public Library, a Works Progress Administration (WPA) initiative opened in 1938. The mural, a composite scene of agricultural and canal life in Perinton, has been called a masterpiece. The former library at 18 Perrin Street is now the home of the Perinton Historical Society, which operates the Fairport Historical Museum.

The impressive mural created by Carl Peters, eighteen feet in length, is a focal point for visitors to the museum.

After his first marriage failed, Carl’s focus on creating his art was stronger than ever. He spent his winters in Fairport, painting outdoors, or “plein air”, along frozen creeks, in the woods, hills and fields. He most often painted with oils, but worked with watercolors as well. He often painted the same scene repeatedly over a period of years, from different vantage points, in spring summer, fall and winter, and with varied lighting. He painted scenes of the village of Fairport, of farms and canal scenes in Perinton and other locations in Monroe County, and often ventured to the southern tier and the Finger Lakes region as well. As summer approached, Carl and many other artists would migrate to the artist colony communities of Rockport and Gloucester, Massachusetts. It was here he met the woman that would become his second wife and partner for life, Blanche. They came back to their cottage studio in Rockport every spring for decades, where Carl painted daily, and also supplemented his income by providing lessons to vacationers. To this day, the Rockport Art Association and its members hold Peters in the highest esteem.

Back in Fairport, he also shared his skills with aspiring artists in small groups, usually for a dollar or two per lesson. Carl’s instruction often was more physical than verbal. He could demonstrate a technique with a few strokes of his brush with great eloquence, and more effectively than with verbal instructions. After the lesson, Blanche sometimes invited the students back to the Peters’ little home on Jefferson Avenue, to warm up with a cup of hot cocoa. A visitor might be startled to see an enormous number of completed paintings in his studio. Although he painted daily, Carl often resisted selling, sometimes refusing to give in to pleas from potential buyers.

Peters is a highly respected name in the art world today. Western New York winter scenes and nautical harbor views with the distinctive signature of Carl W. Peters are coveted by art collectors, and sell for many thousands of dollars. His oil and watercolor paintings reside in the collections of some of America’s most prestigious galleries and art museums. Along with the mural at the Fairport Historical Museum, Perinton is fortunate to have two Peters paintings permanently on display at the Fairport Public Library. One is a winter scene near Bushnell’s Basin, and the other a lush green, heavily treed landscape painted near Fairport.

Creating art and sharing the beauty he saw in the world were incredibly important to Carl Peters, and to his wife Blanche, as well. In pursuit of this goal, they lived a simple, even austere life in their tiny studio-home on Jefferson Avenue. Carl quietly went about his business of painting, day after day, for virtually his entire life, until his death in 1980. A good friend once said, “This is how I remember Carl Peters… quiet, humble, withdrawn, a wry smile while amused, a gentle man.”

For more on the mural at the Fairport Historical Museum go to Landmark Building and Carl W. Peters the Artist page on this site.

Editor's note; This statement is no longer accurate, as Winter Stream is now part of the permanent collection at the museum.

"Perinton is fortunate to have two Peters paintings permanently on display at the Fairport Public Library. One is a winter scene near Bushnell's Basin, and the other a lush green, heavily treed landscape painted near Fairport." 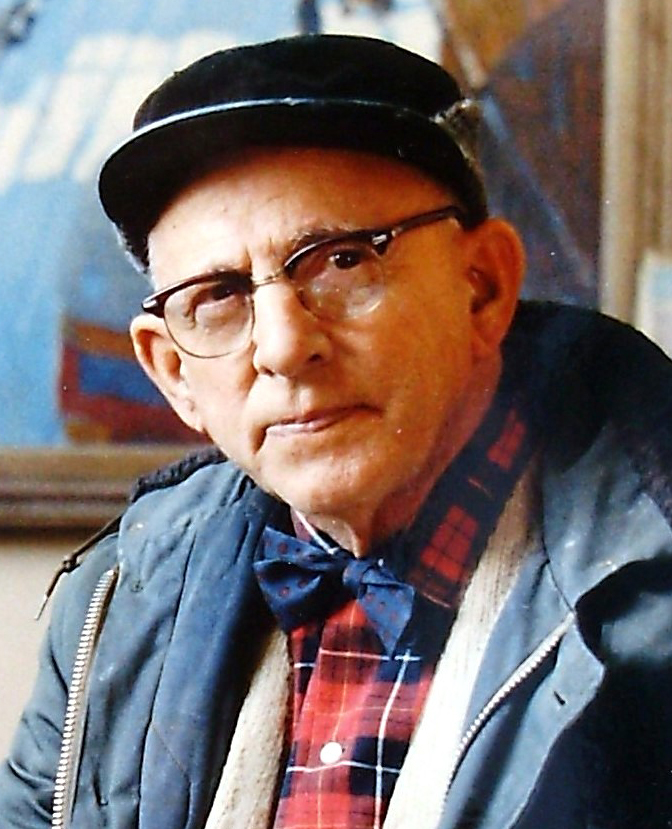 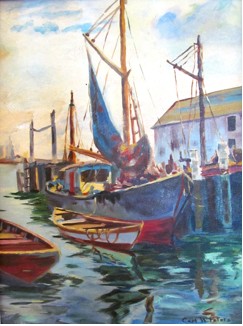 "Rockport Harbor" painting by Carl W. Peters. This painting is in a private collection.

Our own Carl W. Peters mural was celebrated at the Memorial Art Gallery (MAG) with the blockbuster exhibit called, Art for the People: Carl W. Peters and the Rochester WPA Murals. The exhibit ran from Oct. 2015 to Jan. 2016.

To see the mural at the Fairport Historical Museum, visit anytime during open hours. Also, on display is the painting “Winter Stream, which is owned by the village of Fairport.