The Irish Came in Droves 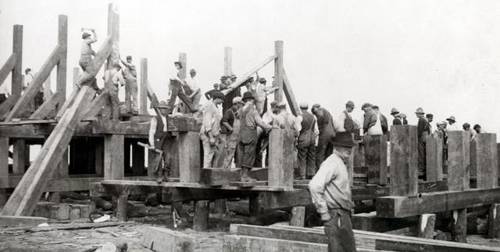 Fairport’s history is rich with stories of people who left their countries for the promise of a new life in a new land. Before 1820, settlers to this area were from other states.

But this changed in 1825, with an influx of canal workers to the area, many of whom were from Ireland.

Later, triggered by the famine years of the 1840s, a wave of immigration resulted in 1 ½ million Irish coming to the US between 1845 and 1846. In Fairport, more Irish settlers arrived in the late 1850s and 1860s to work as laborers on the New York Central Railroad. They laid track, worked in the warehouses, and worked on the trains. They lived in rooming houses and tenements built on the canal and railroad on the north side of town. They later built homes in the village on East Avenue, High Street Ext. (Tillou Rd.), and in the countryside on Daley, Ryan and Hogan Roads.

Typical of the Irish who immigrated to Fairport was the Patrick and Jane Ryan family. In 1865, Patrick, age 38, was a laborer on the New York Central Railroad. He and his wife, Jane, along with five children – Peter, Patrick, Bridget, Jane, and Mary - lived in a railroad shanty near the New York Central tracks. At this point in their lives, they were probably not considered “Lace Curtain” Irish – but rather “Shanty Irish” or “Pig in the Parlor Irish.”

By 1868, things were looking up for the Ryans. Four more children had joined the family – Ellen, Katherine, Margaret, and Elizabeth. And they were able to purchase land on Tillou Road (High Street Extension) and began farming there. (By that time they were probably able to move their pig out of the parlor!)

By 1872, their two sons, Peter and Patrick, were listed in the 1872 census as “smithies” – blacksmiths. Their older daughters, Bridget and Jane, were domestic servants, sometimes referred to as “Bridgets.”

By 1880, Patrick and Jane still farmed. The older children married or moved, and the youngest were doing well in school. The Ryan’s had become part of Perinton’s agricultural middle class.

But even though some Irish enjoyed a measure of success, many struggled with poor housing, low wages, and feelings of separation from their motherland. Father John Codyre, an Irish priest serving at Assumption Church, made plans to have a memorial cross erected in St. Mary’s for the Irish, a gesture greatly welcomed by the Irish community. As one Perinton resident wrote in 1875:

“We learn with much pleasure that the Reverend Pastor of the Catholic Church…has made arrangements to erect in St. Mary’s Cemetery a memorial cross…in memory of the deceased relatives… of the exiled children of the Emerald Isle.”

Fr. Codyre also supported the new Irish community by acting as local president of the Ancient Order of the Hibernians, an Irish aid group organized in 1895. They met in the Chase Block on North Main Street. 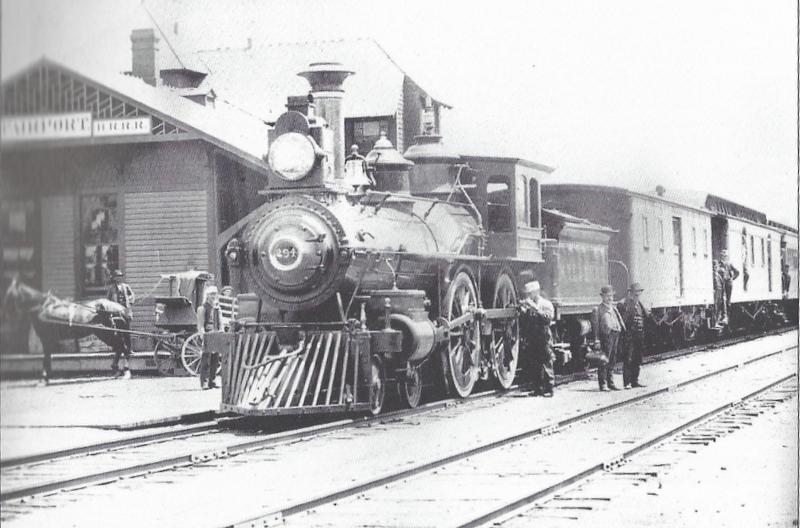 Three families were among the earliest Italian immigrants to settle in Fairport, and their experiences are typical of others who followed.

The Irish and Italian immigrants worked on the North Shore and New York Central Railroad. Shown here is the station in Fairport, NY circa 1852.

In 1894, Tony Pace arrived in Fairport from Palermo, Italy. He was considered the first permanent Italian resident. He worked on the canal and was eventually appointed a canal “bank watchman” in 1917, earning $40 per month. He later operated a cobbler shop at 28 North Main St. in what was known as the Deal Building.

He and his son Joe became interpreters and advisors to new Italian arrivals. For example, an article in the local newspaper notes that he was called upon to interpret when another Italian immigrant was accused of stealing an air brake hose, a pick axe, lanterns, a torch and shovel from the New York Central Railroad. Tony also sold fruits and imported oils in his grocery store on North Main St. He became known as “the Fairport banana king.” He eventually bought land and built a home east of the Cobb’s canning plant. He passed in 1938 and is buried in St. Mary’s Cemetery with many other immigrants.

Ippolito Orazio was considered the second Italian resident. Arriving in 1889, he built his home on Water St. He worked as a foreman on the West Shore Railroad. As his name was difficult for his men to pronounce, he became “Charlie West.” He and his family took in boarders, including Salvatore Fiandach, who arrived in 1903, and was later able to send for his family. They also lived temporarily with Charlie West and his family. 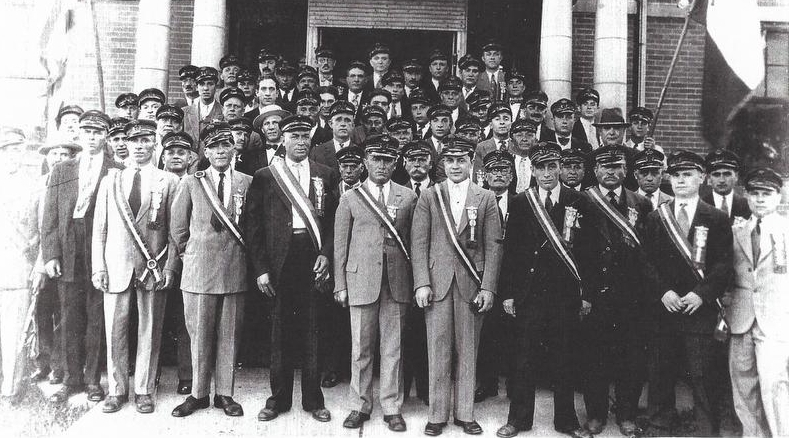 Salvatore Bartolotta emigrated in 1906 from Syracuse, Sicily, where he was an orange orchard foreman and taught evening classes in Italian grammar. He sought better opportunities in America. He lived in NYC for 6 months, and subsequently made his way to Fairport. His wife joined him 7 years later, in 1913.

Bartolotta worked for the Salter Brothers greenhouses from 1912 to 1919, when they were sold to a Mr. Hart. Bartolotta was determined to start his own business. He was living at 49 John Street (Liftbridge Lane) and bought the land in the rear of his property and built 4 greenhouses. He specialized in lilies, but also grew an immense amount of vegetable plants to sell to farmers.

The Italian immigrants, like others, faced many challenges – acclimation to new customs and language, assimilation, and of course, basic needs of food, shelter, and medical care. To raise money to help members, they held dances in the old Baker Hall and carnivals, some along the canal along Roselawn Ave. Salvatore personally helped fellow Italians get naturalization papers, driving people to the city for naturalization tests in his old Chrysler. The museum’s collection includes a book of minutes from the San Sebastian Society, written in Italian, and a gavel.

The greatest growth in Fairport’s Italian population was between 1905 and 1915. Initially, many single men lived in boarding houses along Railroad St., Water St., and John St. (now Liftbridge Lane). Some roomed with families on N. Main and others settled on Elm and Park Streets. By 1920, many Italian-American families lived in the northeast part of the village, especially along High St., Parce St., Frank St., and East Ave., the area featured in the Society's 2016 House Tour: The Northside Story.

See the Erie Canal for more information about the building of the canal and the Transportation page to learn about the railroad. 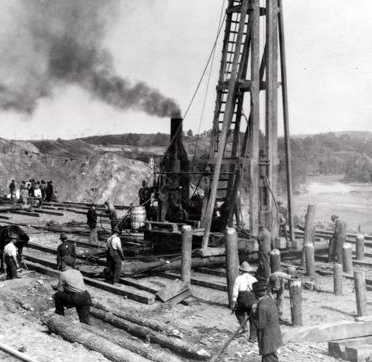 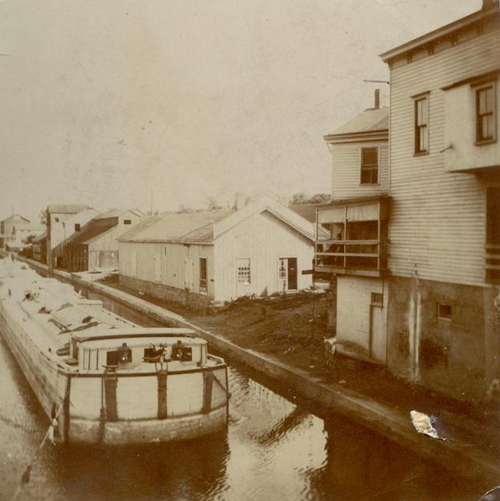 The Erie Canal in Fairport. On the canal, the Hawkins building and Dobbin & Moore Lumberyard c. 1912.

Father John Codyre, an Irish priest serving at Assumption Church, made plans to have a memorial cross erected in St. Mary’s for the Irish.

Patrick Ryan's tomestone at St. Mary's Cemetery. Author’s note: I walked the Cemetery on Turk Hill Road and found no memorial cross, but did find a tombstone of Patrick Ryan, the older son of the Ryans, one of the blacksmiths. He passed in 1876 at age 20.

Tony Pace had his business at 12 North Main St. In 1910 bananas were 10 and 15 cents a dozen. An article in the Fairport Herald in 1912 called Tony Pace, "the Fairport banana king". 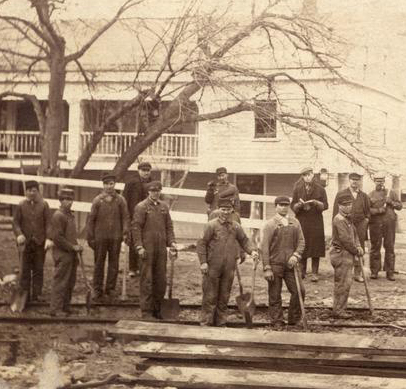 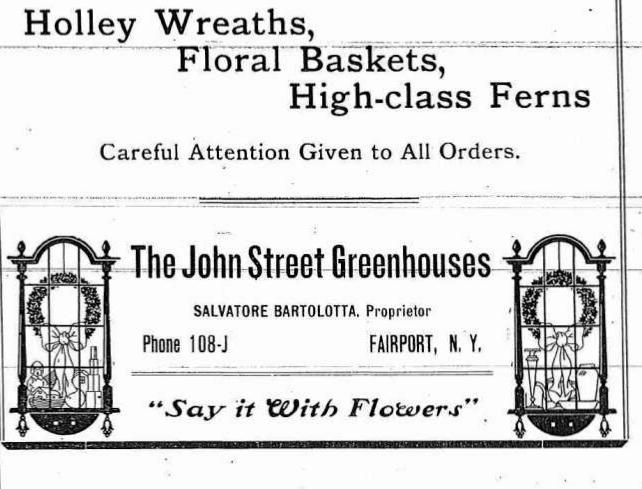 The John Street Greenhouses, owned by Salvatore Bartolotta specialized in lilies, but also grew an immense amount of vegetable plants to sell to farmers.