Again, in this style as in the previous two, we see the influence of architect designed manor houses, but this time based on English Seventeenth century models. American architects drew their inspiration from late medieval buildings with Renaissance detailing popular, during the Seventeenth century. They were labeled as "Jacobethan", and represented a period of English history that ranged from thatched roof cottages to manor houses. During the 1920's, these homes were made of stone or brick. As the style became popular however, the use of masonry veneer enabled modest wooden homes to imitate more expensive versions. 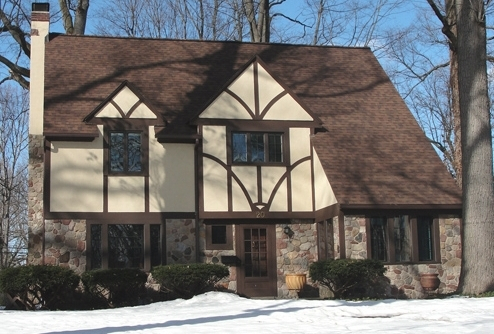 Tudor was a very popular suburban home style throughout the country during the early 20th century. In the 1920s and 30s it was only rivaled by Colonial Revival as a vernacular style, but it faded rapidly after the 1930s. Most of these early models have decorative half-timbering mimicking their earlier cousins Queen Anne and Stick, and used stucco or masonry veneered walls. Brick veneer was common with stone, stucco or wood used as trim or decorative details on the upper stories.

Since the 1940s, and into the 1970s there has been a revival of this style (Neo -Tudor). While familiar details are seen in these homes: front-facing gables, half-timbering and deeply pitched roofs - it remains a loose modern imitation of the original eclectic style.

This home is located 20 Ridgeway in the Forest Hills neighborhood. It has decorative half-timbering, stucco and stone on the lower level. 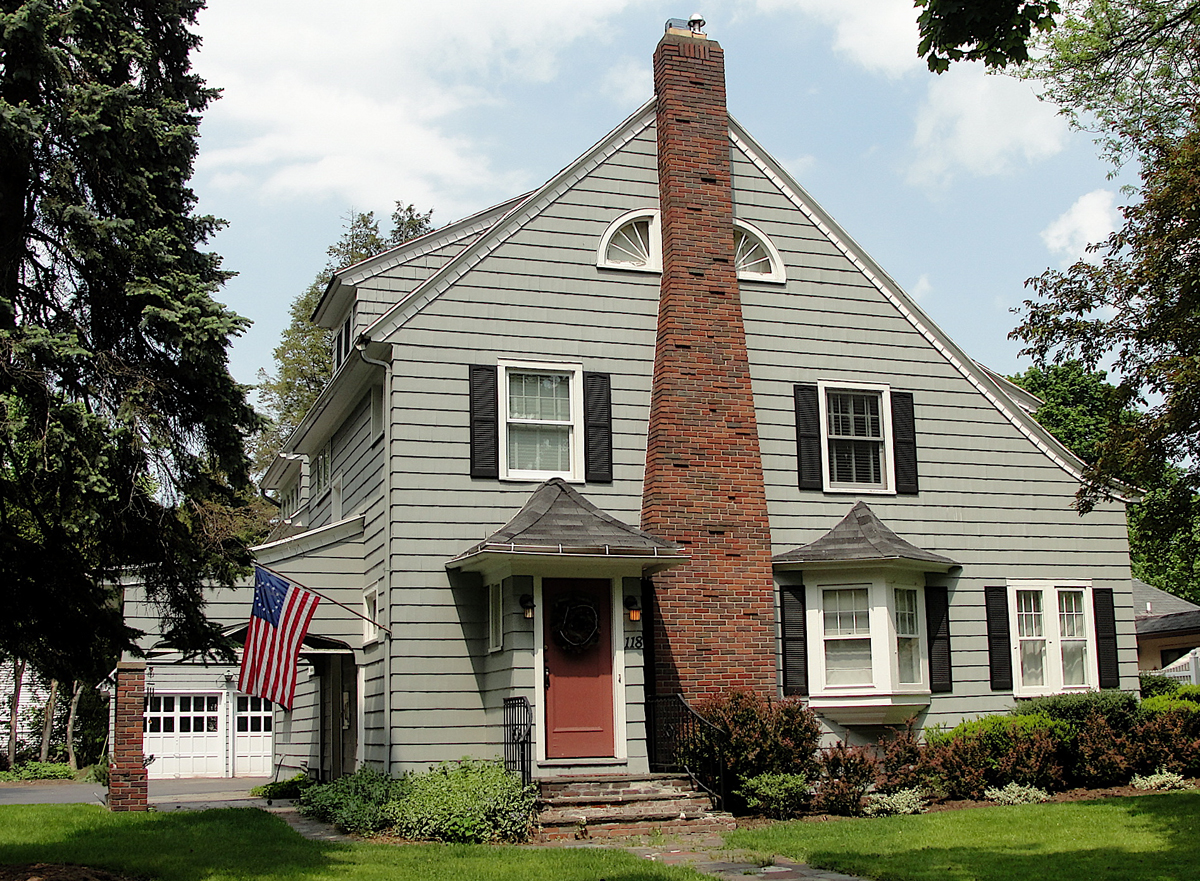 Large elaborate chimneys are a favorite Tudor feature and are seen prominently at the front or side of the house, these, too are decorated with complex stone patterns and then topped with a decorative chimney pot.

This Tudor at 118 West Church Street has wooden cladding, a prominent front chimney and half fanlights on the upper floor. The entrance and a two sided oriel window are capped with flared roof-lines.

Usually not present at the front of the house and small if they are, but side porches are common.

Tall, narrow windows in multiple groups with multiple panes; often casement and grouped together on or below the main gable, or on one or two-story bays.

Here, too, stone detailing is used to simulate Renaissance details. Stone cutwork may be seen in the surrounding brick. Otherwise, doorways are simple, round arches with board and batten doors. 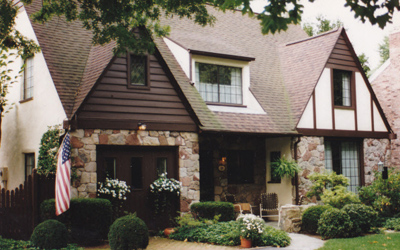 This Tudor Revival at 23 Ridgeway in the Forest Hills neighborhood has decorative half timbering and a steeply pitched roof with front gables. The home, built in 1937, is a town of Perinton designated landmark.

A tall and steeply pitched front-gabled roof forms the principal facade of 45 Nelson Street. This house was featured on the 2008 Faircroft House Tour.

6 Lake Crecent Avenue in the Forest Hills area of town has a large prominent chimney in the front of the house, casement windows and timbering.

A side view of 118 West Church shows the dramatic pitch of the roof. 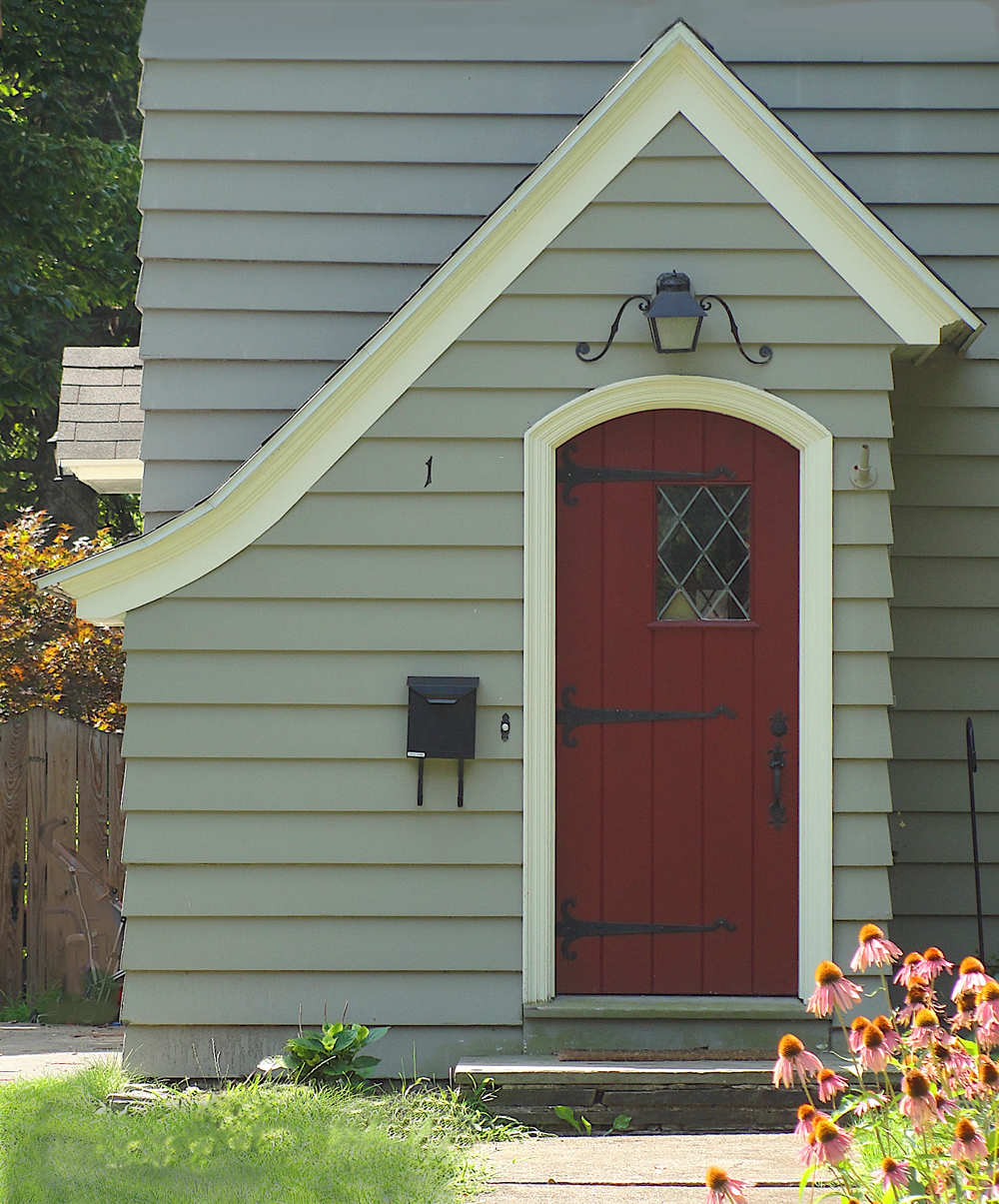 The doorways of Tudor homes are a favorite area to add Renaissance detailing. Here at 1 Galusha Street is a segmentally-arched board door with a small, diamond-patterned leaded glass window and decorative hardware.

There are many Tudor Revival style homes in the Forest Hills area of Perinton. See the history of Forest Hills.