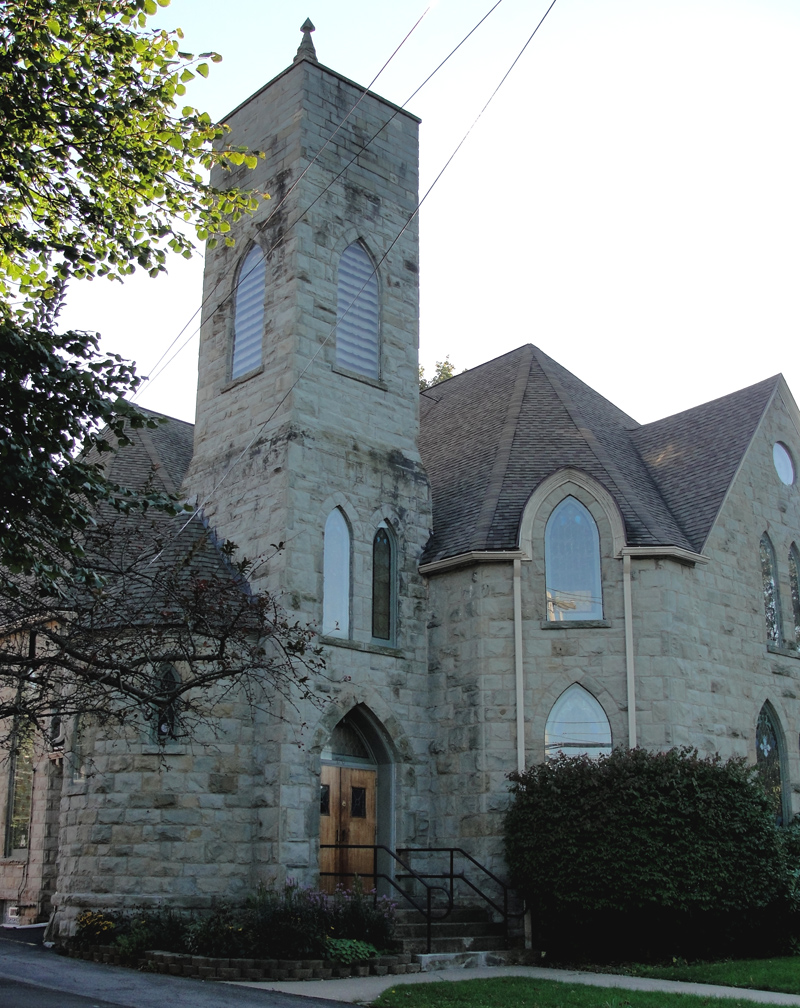 Roman influenced architecture has been around a long time in architectural design. Two styles have been identified in America. The earliest, Romanesque Revival, was inspired somewhat by the medieval Norman style popular during the eleventh and twelfth centuries in Europe and bloomed again in the United States during the 1840-50s. But it was eclipsed by the romantic Italianate and Gothic Revival styles so popular during this time. The massive style was primarily employed for public buildings where the designers wished to make a statement. Houses in this style were never popular. 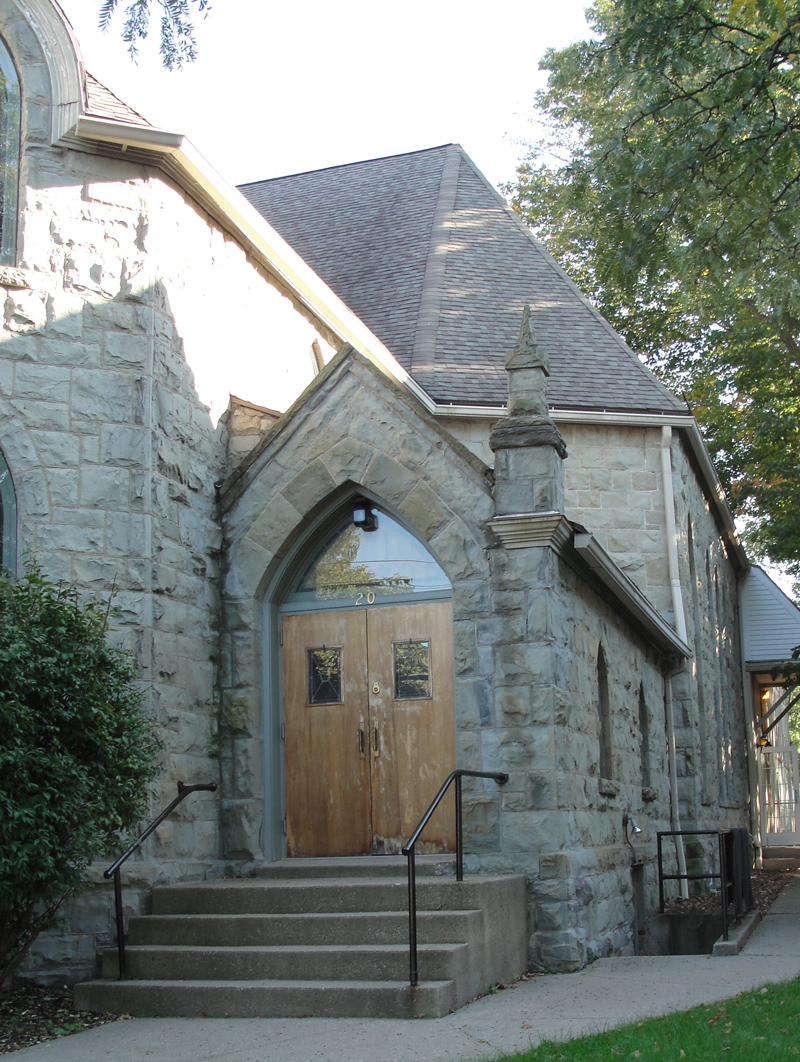 This Romanesque church at 20 East Church has Gothic Revival arched stained glass windows. The pastor the Rev. L. W. Raymond designed the church. The Free Will Baptist Church was built in 1892 and renamed for the Reverend in 1915. It is now (2015), the Fairport Community Baptist Church.

Not so with the second phase that influenced mainstream America so deeply. Architect Henry Hobson Richardson took the style and innovated its basic tenets using multicolored walls, Syrian arches, Roman arches and sculpted walls. It is said that he created a Romanesque Revival style considered to be distinctly American, more Richardsonian than Romanesque, hence the name. Because the style was so massive and the construction requirements so costly, it was mainly affordable for elite architect designed residential mansions and sometimes urban town houses. But it quickly became popular as an almost universal style for all manner of public buildings: churches, libraries, courthouses and schools.

Structures are always masonry and show rough-faced square stonework (ashlar). Colored stone or brick are often used to create decorative wall patterns. Wide rounded arches (Roman or Syrian) are the key feature of this style and occur above windows, porch supports, or over entryways. Thick, cavernous entryways with rounded arches are noted.

The arches commonly sit on squat columns or massive piers or are built into the surrounding wall and can be decorated with floral or other decorative features at the column cap. Towers are common, one or two, usually with round conical roofs.

Hipped roofs with one or more lower cross gables: one facing front and one to the side and resemble the more familiar Queen Anne style, but gabled (side and cross) as well as mansard roofs are also seen. Dormers are most commonly parapeted gabled wall dormers, but hipped and eyebrow dormers are also seen. 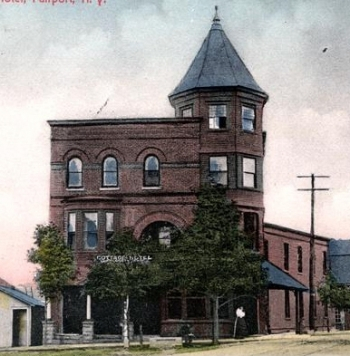 Deeply recessed into the masonry wall with a single pane of glass up and down. These sometimes show small decorative columns on each side. Commonly groups of three or more arched or rectangular windows.

Wide rounded arches are the key feature of this style and occur above windows, porch supports, or over entryways. The image on the right is the Cottage Hotel on Main and then State Street. The structure was built in 1886 on the site of a former blacksmith shop and wagon business. In 1968 it was gutted by fire and torn down. 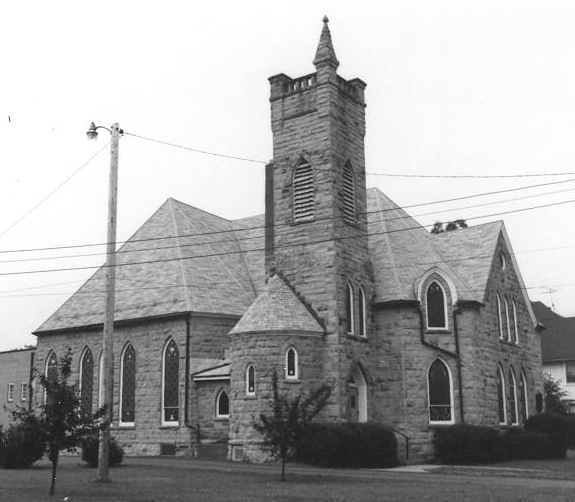 1976 image of the church at 20 East Church Street shows the tower and hipped roofs that resemble the Queen Anne style. 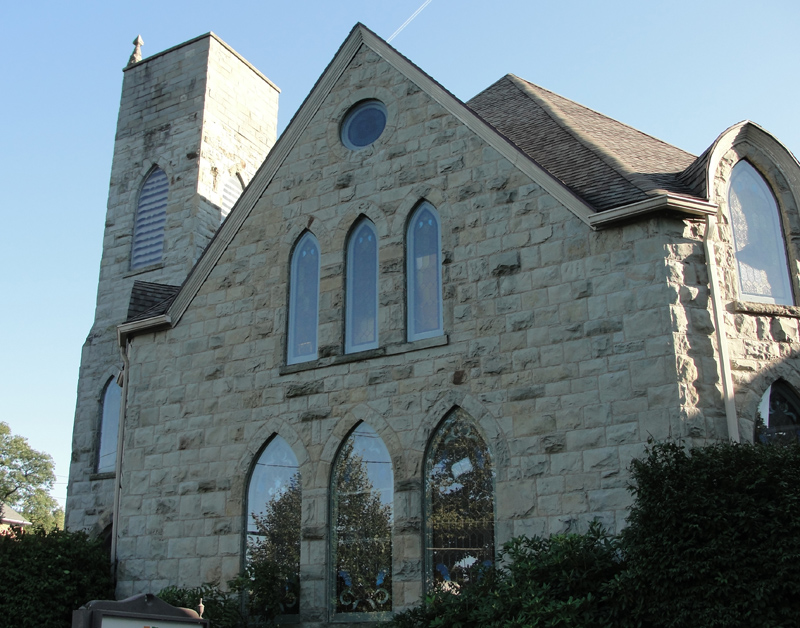 The church at 20 East Church has a front gable off a hipped roof. This is a common roof configuration with one or more lower cross gables; one facing front and one to the side. 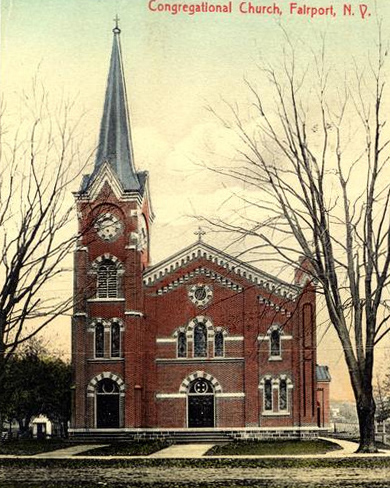 One example with some Romanesque features is the First Congregational United Church of Christ at 26 East Church Street. This church is a designated landmark. This is also a fine example of a Gothic Revival steeple. This image of 26 East Church is from a 1910 postcard. 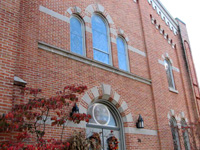 First Congregational United Church of Christ has wide rounded arches over the doors and windows.