"Anything Goes" is the best description for this architectural style, the most eclectic of the Victorian era styles. Having little to do with the Renaissance architecture associated with England's Queen Anne, the movement was named by a group of architects led by Richard Norman Shaw, who copied the half-timbered and patterned masonry of the late medieval period. Queen Anne is the culmination of the Picturesque and Romantic styles, and many details of these preceding eras can be seen on Queen Anne homes. 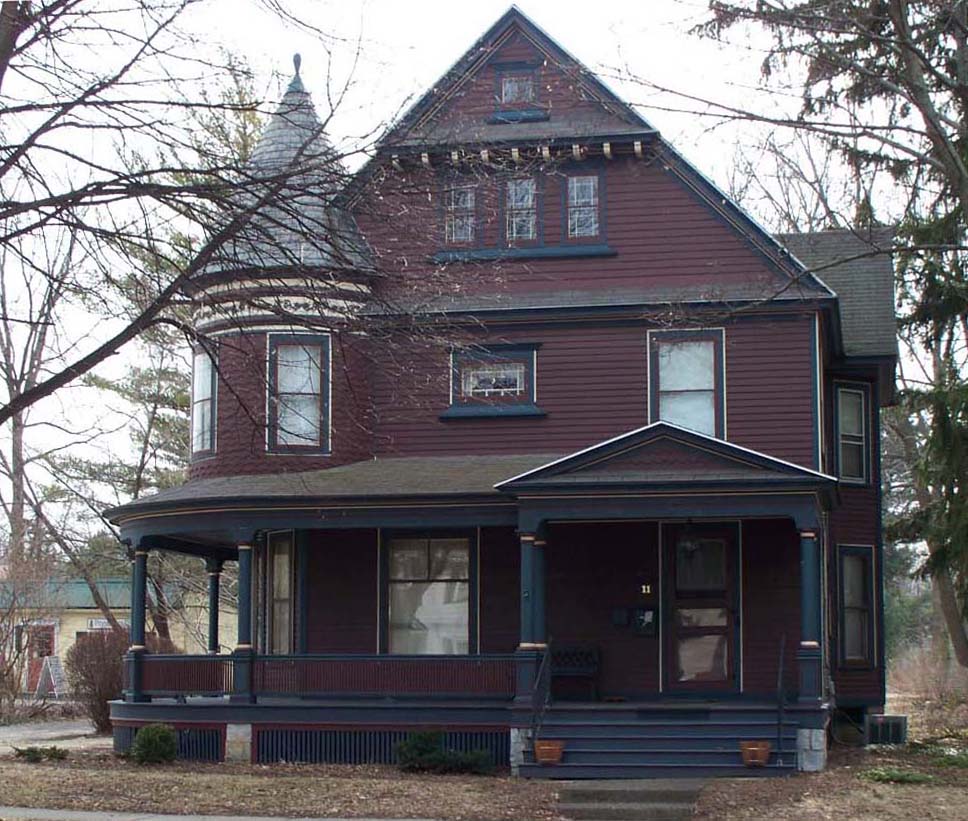 Queen Anne makes a point of two features: house shape and decorative detailing. It encourages asymmetrical (not balanced or equal) shapes and wall surfaces that are filled with bays, towers, overhangs and wall projections. They are further filled in with decorated surfaces using patterned shingles or patterned masonry. Plain, blank wall surfaces were not to be tolerated.

This Queen Anne home at 11 West Church Street has a dominant front-facing gable, steeply pitched roof and a wraparound porch with free classic details that echoes the curve of the round tower. The tower has patterned shingles and raised decorative banding. It has a candle snuffer peaked roof with original slate and finial.

There were two unique decorative detail subsets of this style: the spindlework and free classic, both of which became very popular during the 1880s. Through the latter half of the ninteenth century pre-cut architectural details had become readily available to the public and the home building market. Queen Anne was just the style to make use of these innovations.

Fairport has several wonderful examples of the popular Queen Anne style; one of the most notable is the home at 11 West Church Street. Take a stroll through the Village and see if you can find the Queen Anne architectural details that decorate so many of our village homes.

Steeply pitched roofs with irregular shapes; most commonly hipped with one or more lower cross gables and a dominant front gable. Towers and dormers are common; towers are usually placed at the front corner of the facade and dormers can be located on any of the roof presentations.

Classical columns are featured, rather than the turned porch supports, with delicate spindlework detailing. Sometimes, these are the full height of the porch or placed on a pedestal at the level of the porch railing. The columns are commonly grouped together in units of two or three. 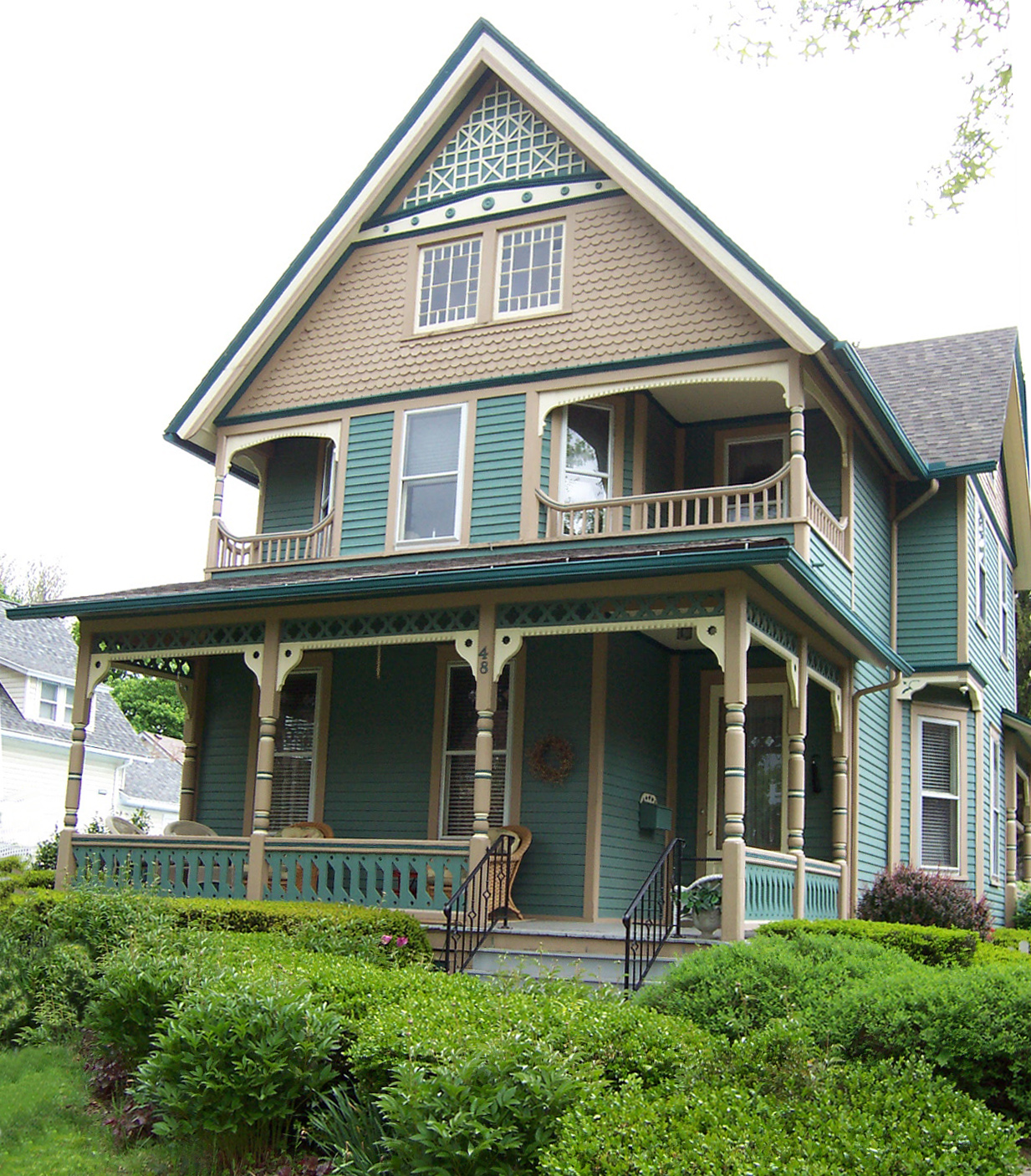 Porches are an important feature of Queen Anne homes. Most commonly they are seen as a one-story porch that covers the entrance, but they often extend around one or more sides of the house. Recessed porches are not unusual and can be found in second stories, gables, or towers.

Bay windows are prevalent, and when roof gables overhang the bay window shaped into the wall below they form a cutaway bay window. These overhangs are then trimmed out with spindles or brackets. Windows themselves are fairly simple, usually a single pane or a single pane surrounded by small panes on one or more sides. Doors are simple also, with decorative incised detailing and a single pane of glass in the upper half of the door.

A beautiful example of second-story porches, delicate turned
porch supports and spindlework ornamentation. This Queen Anne is at 48 West Church Street. In 2014, this house built for Irving Eldridge was designated a landmark. The carriage barn is also included in this designation. 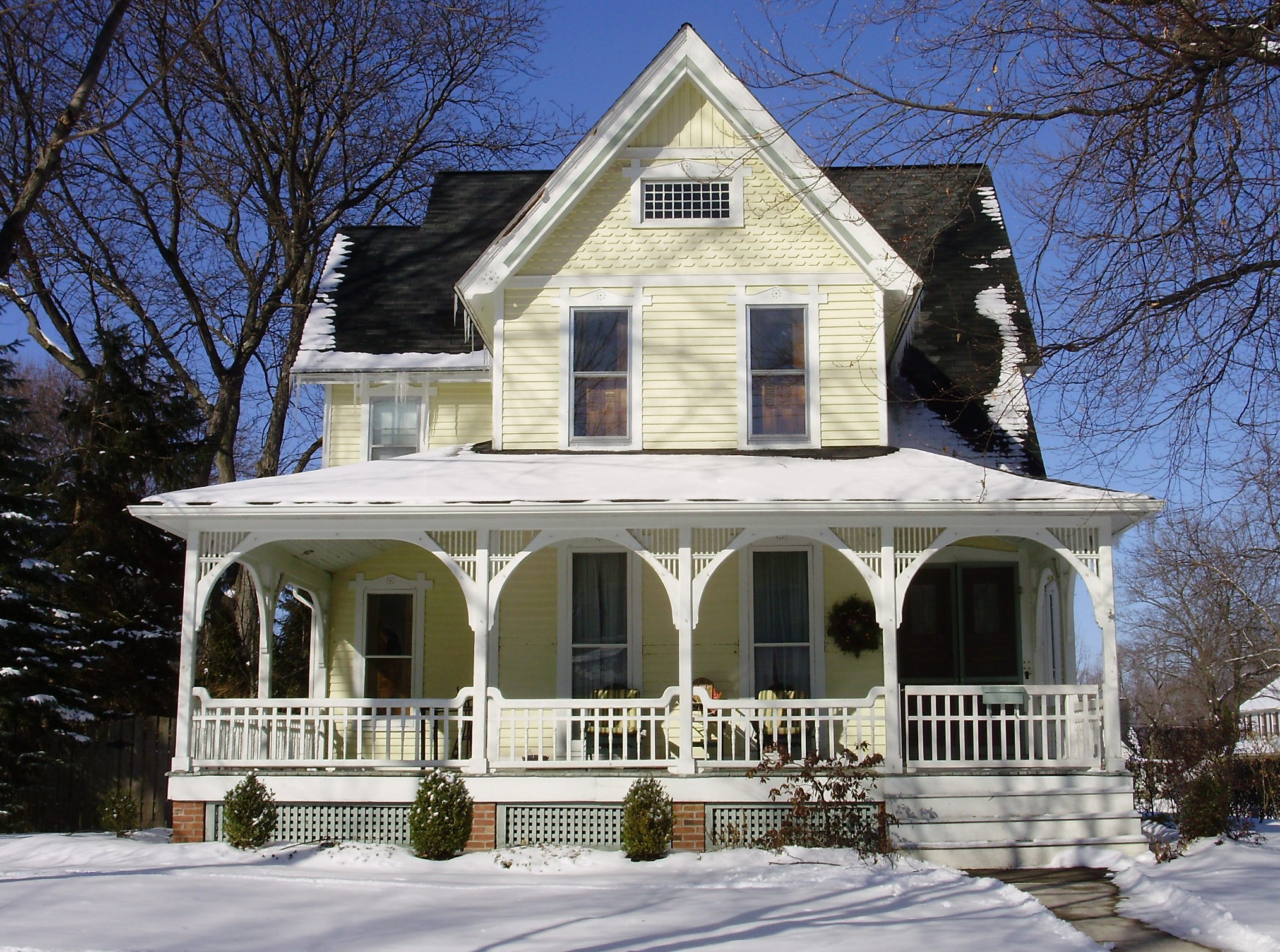 This home at 112 West Avenue was built in the 1870s. It is an outstanding example of a transitional Stick  to Queen Anne style. The two styles are similar in that they use wall surfaces as primary decorative elements. 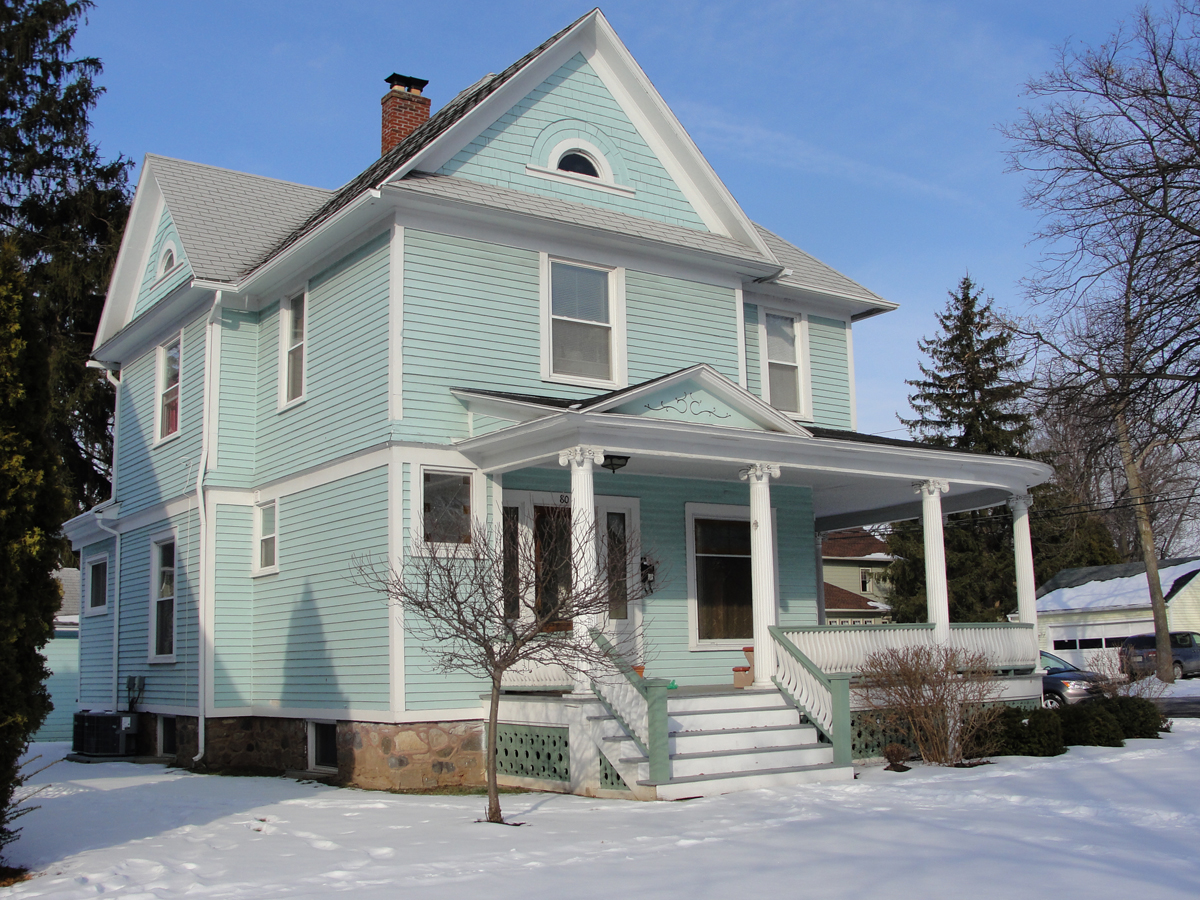 80 West Church Street was built in 1900. It has many Queen Anne features such as the pent roof and decorative shingles in the gables, and the wraparound porch with beautiful curved spindles. The porch has classical Corinthian columns that are more often found in the later Colonial Revival style. 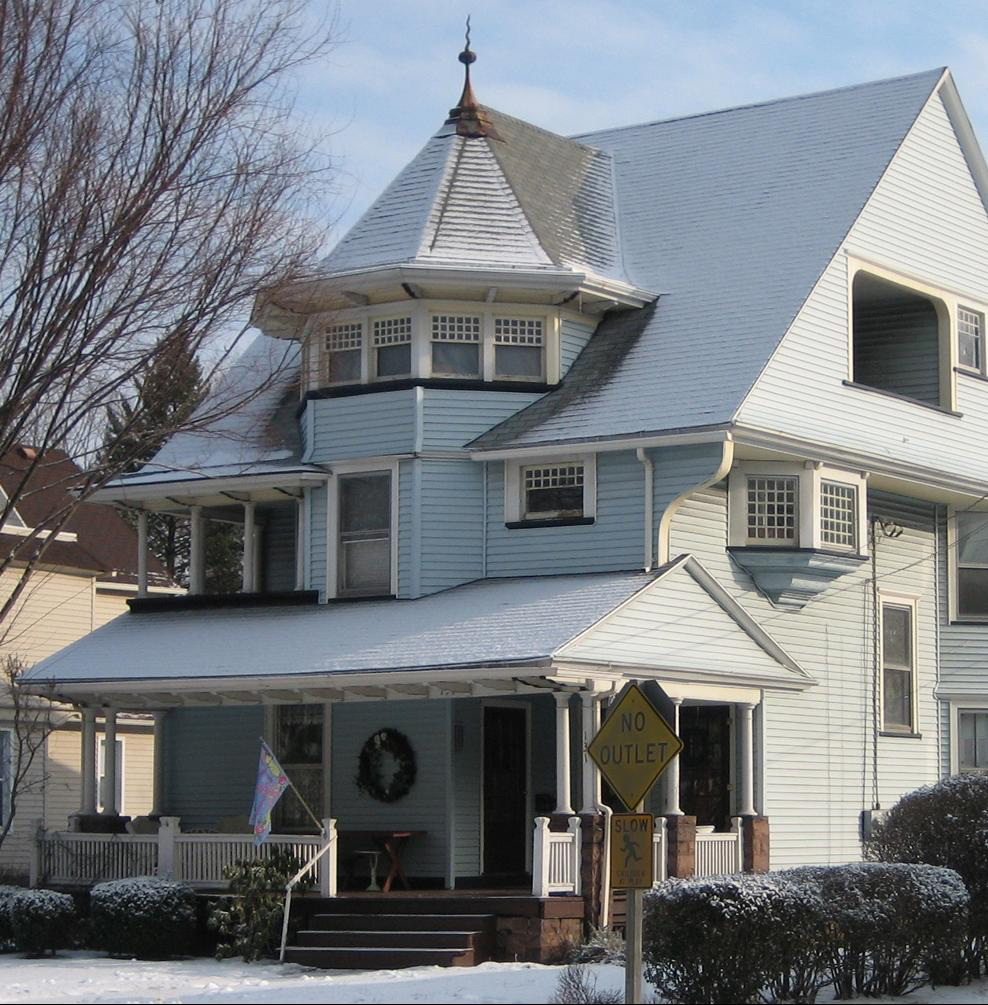 This home at 131 South Main Street has a center tower with finial, first story porch in the free classic subtype with bracketed eaves, a second-story and third-story porch, two-story bay window and windows have square panes on upper sash and the small projecting bay under the gable. 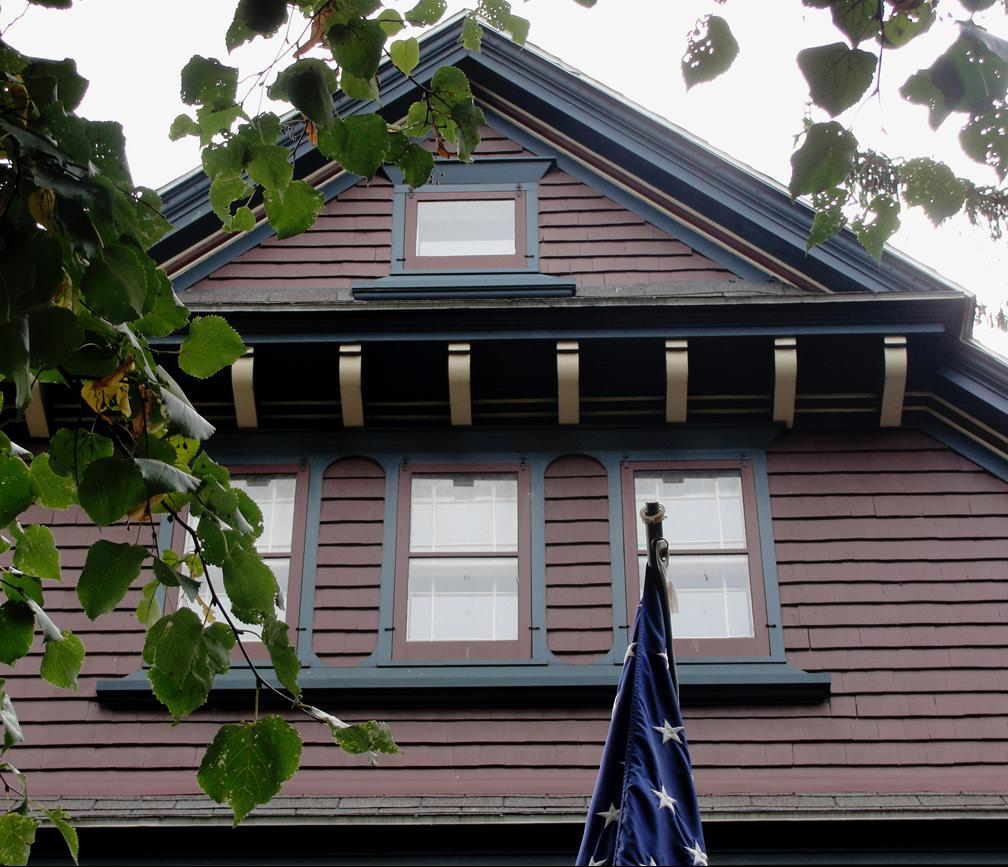 The front gable of 11 West Church Street has a triangle section extended forward with decorative brackets. Home is a designated landmark. 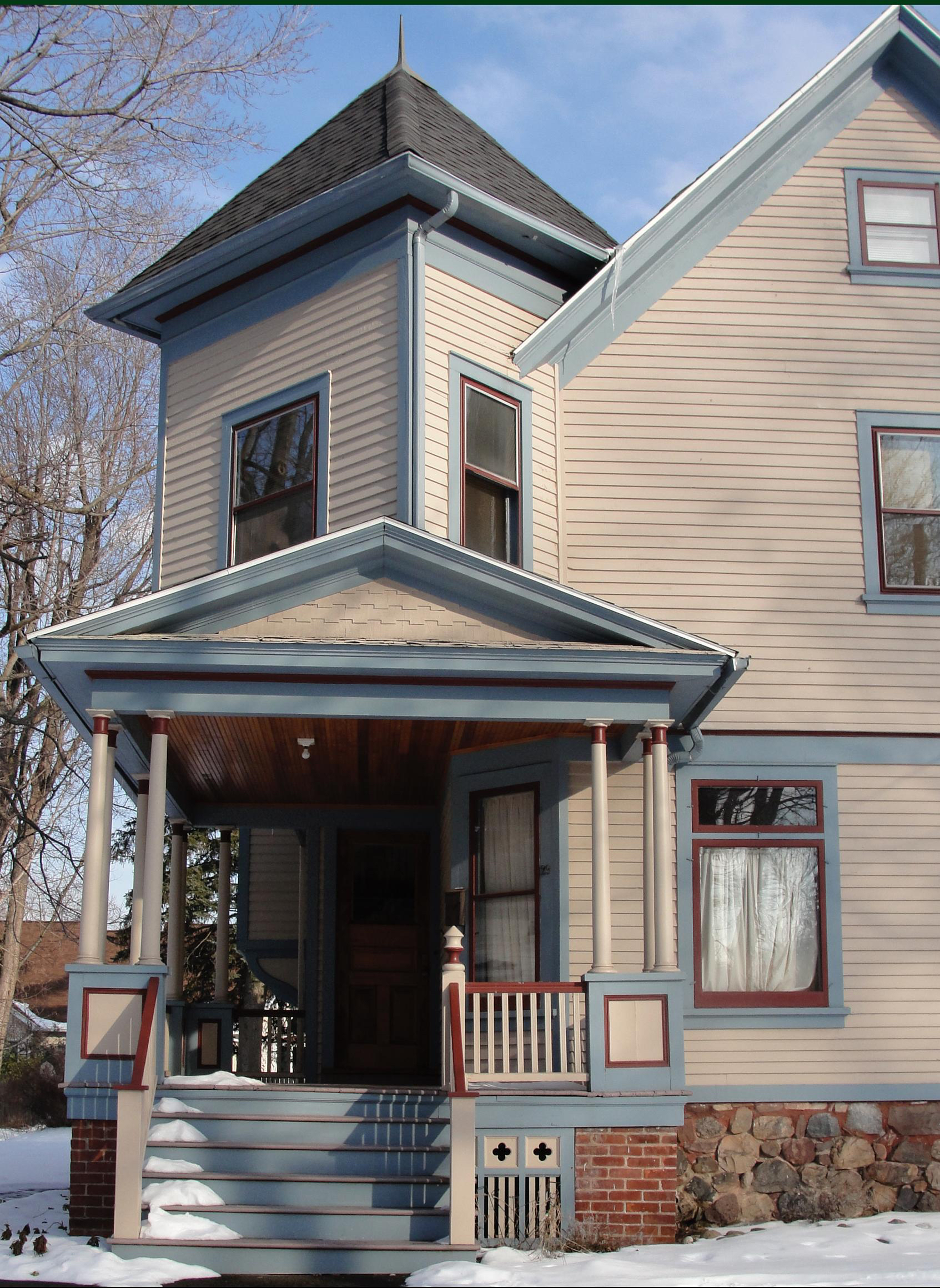 29 West Street has a tower at an angle, various size windows and the details of the free classic porch. 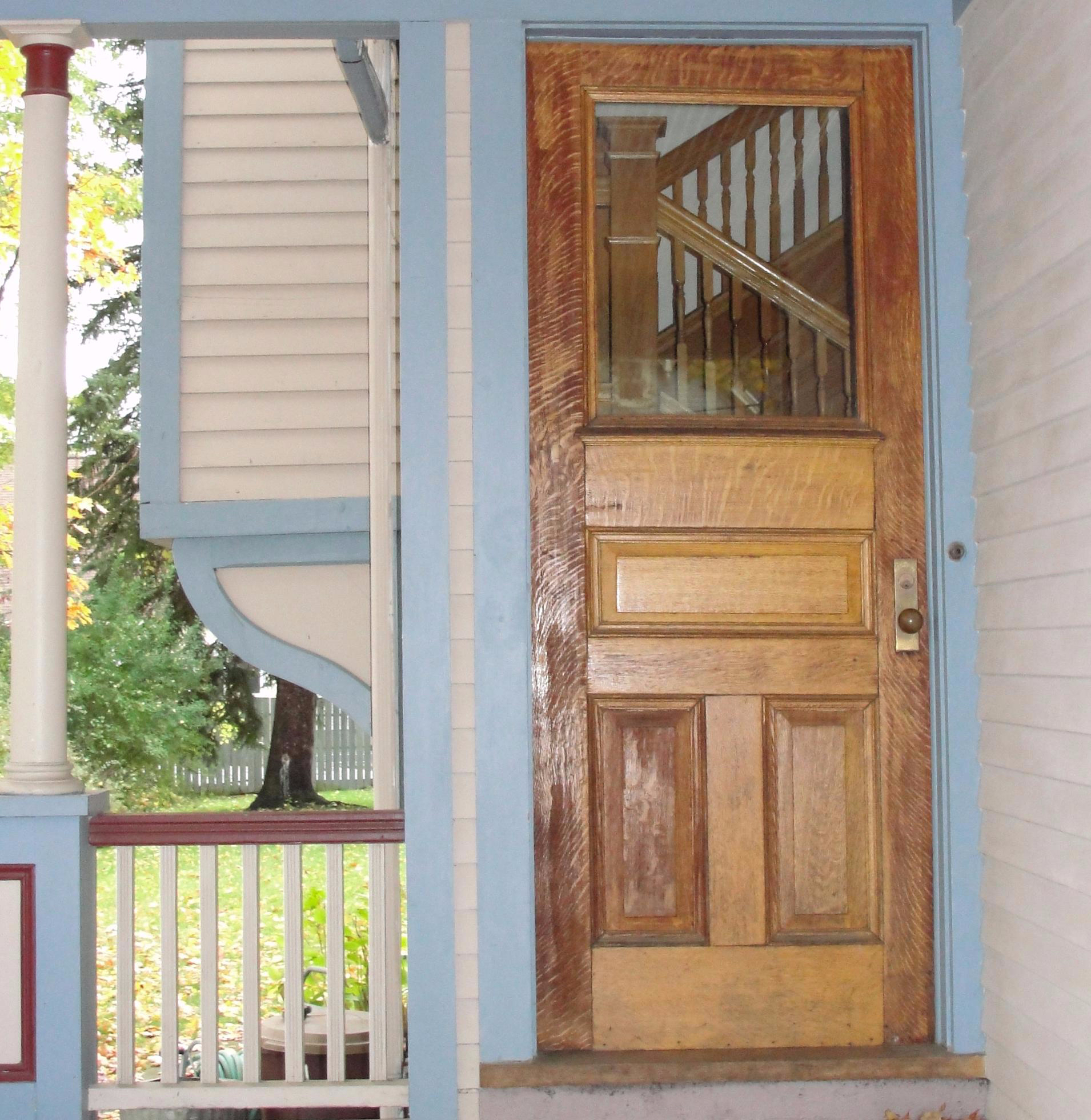 A single large pane of glass is set in the upper portion of the door at 29 West Street. Frequently, in a Queen Anne you will find a more elaborate door with decorative detailing and a window pane surrounded by small or rectangular panes on one or more sides.

The free classic porch at 29 West Church Street has two or three simple classic columns raised on a pedestal to the level of the porch railing.