In the spring of 1789, Glover Perrin, his wife, Johanna and his cousin Caleb Walker, walked from Rehoboth, Massachusetts, to what is now the township of Perinton. After surveying the township and dividing it into sixty-six lots of about 325 acres per lot, these early pioneers built the first log cabin.

Since only Seneca Indians inhabited the entire area at this time, the Perrins became the first white people to settle in the township. Caleb Walker spent the summer surveying the territory, and building, with Glover Perrin the windowless log cabin on Ayrault Road. It is said that during this period of the late 1700s, the surveyors in return for their work were able to homestead their own parcel of land, and that the cost of an acre of land was 20 cents.

By 1794, Abner Wight, one of the "Minute Men" who fought in battles against the English at Lexington and Concord, built a small tenant farmhouse on the southeast border of the village of Fairport. His wife, Huldah Perrin, was the sister of Glover and Jessie Perrin, and their seventh child, Asa, was the first child of early settlers to survive and grow up in Fairport. Jessie Perrin had a child born in 1797, but it did not survive.

The first log cabin in this area was built by pioneers Glover and Johanna Perrin, and cousin Calab Walker. The windowless log cabin was made of timbers left round, and joined at the corners by overlapping saddles notches. 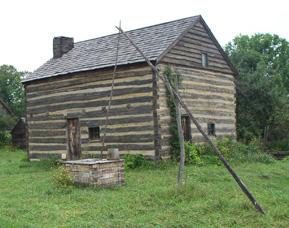 The log house became the dominate housing over much of the heavily wooded eastern-half of the country. This style had walls of squared-hewn logs joined by carefully hewn corner notching.

The midland log house was a building tradition introduced in the middle colonies (Pennsylvania, New Jersey, Delaware and Maryland) by early Germanic immigrants from heavily wooded areas of central and northern Europe. Their technique used far less wood than a home built with solid log walls. Hand-hewn square logs were placed horizontally, one on top of the other, to make a solid wooden wall. The structure was held together with interlocking or notching timbers at the corners.

The pioneers who settled in Perinton quickly adopted the Germans' log building techniques, but modified their three-room house into a one-room deep linear plan with an external chimney. These homes were usually one room, with an end chimney and a sleeping loft.

There are very few early dwellings remaining in this area. The photo here is a log house - built c. 1809, from Scottsville, NY. The log home has been moved to the Genesee Country Village and Museum, Mumford, NY.

In the photo above,  you can see the squared oak timbers of the one-room log house built by Nicholas Hetchler (a native of Pennsylvania), who first settled in the Genesee Country in 1787. Dovetail joints where the timbers overlap at the corners are typical of log house construction. A portion of one wall of solid stone masonry providing a fireproof back for the hearth is characteristic of other early log homes in the Genesee Country, as is the clay-lined wooden chimney.

Blockhouses were normally built for defensive purposes, and were considered a fort made of squared timbers with a projecting upper story.

The first blockhouse was built by Jesse Perrin in 1792. In 1817, Martin Sperbeck bought 100 acres of land and built a blockhouse of squared timbers on the site. His brother, a trapper, occupied a cabin where the Village Hall is located at 31 South Main Street. Village legend states that the path between the two residences eventually became South Main Street.

It is not known what he and Jesse Perrin had in mind when they built their blockhouses, but we assume it was for protection of some kind. Martin Sperbeck's blockhouse stood at 200 South Main Street where a beautiful Italianate home is now (2010) located. 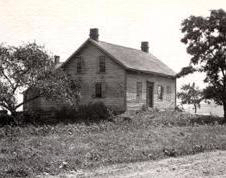 The New England area, settled as early as the 1600s, had developed fairly large two-story house plans with double chimneys and central hallways. As settlers moved west and into remote areas, they tended to build similar but smaller and less pretentious houses.

They revived the one-story linear plan of two rooms on the first floor, or perhaps the deeper Cape Cod style which allowed further space at the rear.

Isaac Beers, built the first frame house in Fairport in 1817, on the site now (2010) occupied by the Deland House at 1 East Church Street. His house was moved to 39 East Church Street when Henry Deland purchased the property and built his home in 1874.

Example of a blockhouse. This photo is of Fort Logan, White Sulfar Springs, Montana, USA.

This frame house was a tavern owned by Isaac Arnold.