This year’s tour afforded the opportunity to visit six wonderful homes at the southern entrance to the village: South Main Street, a historic area of architecturally distinguished homes. If you could travel back in time, you would see a very different area, one dotted with orchards of fruit trees and greenhouses bursting with roses and other precious flowers.

Some of the orchards were owned by the Clark family, who moved to 249 South Main in 1907. Charles Johnson Clark bought a home built for Civil War veteran Simeon P. Howard, a home flanked by extensive orchards.  On June 23, 1904, the Monroe County Mail described the extent of these orchards: 50 acres, 2500 peach trees, 2500 pear trees, 600 plum trees, 500 cherry trees, 500 prune trees, 300 quince, and a quantity of apple trees. The Clark family sold the home in 1922 but purchased it again years later, in 1936.

Greenhouses were also part of Fairport’s landscape. One such complex of multiple greenhouses stood at the corner of Hulburt and Moseley Roads. They were built in 1885 by Rochester nurserymen Al and Dick Salter, who sold cut flowers shipped by rail to Rochester and delivered by horse and wagon to florists.

In 1918, George Hart, who had worked for the Salter brothers, purchased their business, planting 15,000 roses that first year and adding 25,000 more in his second year. He also grew gardenias. He soon joined forces with James Vick, owner of an established seed company, to form the Hart and Vick Seed Company. With hard work and research on growing roses in this climate, the company flourished. In 1933, the partners opened some of their gardens to the public and built a conservatory and trial gardens connected with winding paths for walking. The gardens became Victory Gardens for residents during World War Two. The Hart and Vick enterprise lasted well into the 1950s.

In 1967, Hart’s son, George B. Hart, sold the thirty-six-acre parcel for development, a contentious move as the property contained the last remnants of a beech-maple forest. Despite a campaign to have the town purchase the land and proclaim it forever wild, the greenhouses were razed and replaced with Harts Woods Apartments, which later became condominiums, Westage at Harts Woods. The town of Perinton, however, acquired nine acres, aptly named Harts Woods, which was declared a national landmark by the National Parks Service.

As you stroll down South Main Street, the sight of trees, shrubs, and flowers may trigger thoughts of a bygone era of acres of fruit trees and abundant glorious blooms.

Take time to smell the roses – and the gardenias too. 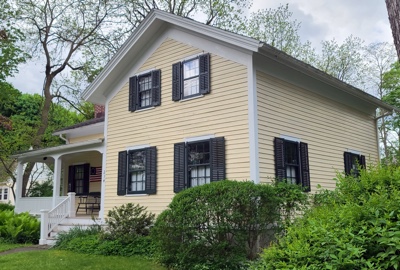 Abner Wight, a Revolutionary War veteran, built this house circa 1825. It was originally erected across the street at 249 South Main Street and moved here in the late 1800s.

It is a mix of Federal and Greek Revival, having been constructed at two different times.

Electa Griffith Barber's parents, Margaret and Russell Griffith, purchased the home in 1937 and lovingly restored it. The present owner is the third generation of Barbers to occupy the house. For more information on Electa Barber visit her page under People of Perinton.

The home was designated a local landmark in 2009. For more informartion visit the Abner Wight House page in the Village Preservation section of this site. 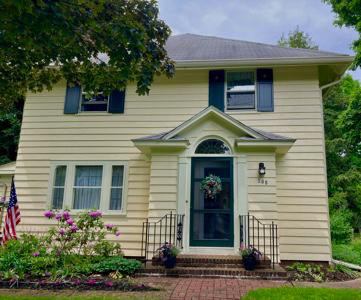 Surrounded by mature trees and delightful gardens, this 1925 Colonial Revival style home was built in the pear orchard of the Brooks Farm.

The Roberts are the third owners of this property. Note the inviting three-season sunroom entrance with it bead board ceiling. Typical of the carpentry of the era,  the multiple built-in throughout the home offer unique spaces for storage and display. The period light fixtures leaded-glass windows and fanlight over the front door were designed for optimum natural light.

Sue Roberts has served the community as the town of Perinton historian and Town Clerk. For more information on Sue Roberts, visit her page under People of Perinton.

The home was designated a local landmark in 2022.

This is a house for porch lovers. It was built originally on 100 acres by Martin Sperbeck in the early 1800s.

When you cross the spacious front porch and enter the home, you are greeted with high ceilings and chandeliers, elegant wallpapers and refinished floors.

This home is being renovated to showcase the large rooms and detailed woodwork. The owners enjoy sharing their home with guests and have designed a large kitchen that overlooks the beautiful garden and grounds.

This home was designated a local landmark in 2oo9. For more informartion visit the Martin Sperbeck House page under Village Preservation. 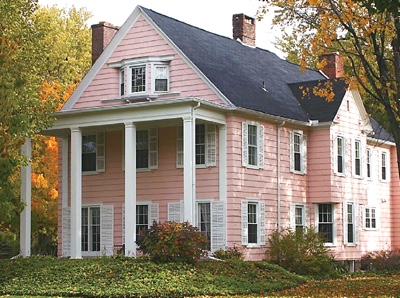 This home was built circa 1890 in the Queen Anne style, popular between 1880 and 1910. The remaining features of this era are the windows on the upper front which had a pent roof above them and the cut-away-bay on the south side of the home. In 1923, a great deal of remodeling was done, including removal of a covered front porch and the addition of four columns. In 1957 a family room was added with an underground garage. In 2010, a covered patio was added.

The Hartman house at 199 South Main Street, in its former pink hue, as remembered by many.

In 1946 Elmer and Phyllis Hartman purchased the home along with eight acres, moving from the city of Rochester. They had five boys, all of whom became engineers. The house was painted pink to add a bit of femininity to Mrs. Hartman’s life. The current owners are Peter and Sara Hartman, who have two children.

The kitchen has handcrafted wooden cabinets and a sink and counter fashioned by Elmer Hartman from one large piece of stainless steel. Across from the kitchen is the eating area.

The dining room is warmed by a fireplace of Vermont Marble and a window with southern exposure. At one time an enunciator beneath the table summoned the kitchen help.

The formal living room at the front of the home has another fireplace and arched built-in bookcases. From the front window a rotator device that holds the annual Christmas tree is apparent. Display of the tree is a longstanding family tradition.

This grand house could tell many tales, including two about women who made their mark in the artistic world: Ida Dougherty Aylward and Kate Cox Goddard.

Ida Dougherty Aylward
Ida Dougherty Aylward, 1878 – 1955, was born in 1878 and grew up at 199 S. Main. She traveled by train on Saturday mornings to take classes at the Mechanics Institute (later the Rochester Institute of Technology) in Rochester. She graduated from Fairport High School in 1896, one of three in her graduating class. She graduated from Mt. Holyoke College in Hadley, MA, and studied at the Art Students’ League in New York City an at American illustrator Howard Pyle’s Brandywine School in Delaware between 1903 and 1905. She created stained glass windows for cathedrals and churches, and illustrations for several magazines, including Collier’s. In 1912 Dougherty married fellow artist William James Aylward, who served in World War I as a commissioned war artist.

More information about Ida can be found on her page: Ida Dougherty Aylward in People of Perinton.

Kate Cox Goddard
An artist of another sort called 199 South Main home. Kate Cox Goddard was recognized for her work with parents of disturbed children and became an authority in this new field. In 1848, she was the guest speaker at the Fairport Business Women’s Association, a meeting held at the Potter Memorial. Her topic: musical therapy.

Goddard was also a well-known children’s author, writing poems, books, and song lyrics. She sometimes wrote under the pen name of Almeda Babcock, the names of her grandmothers. She wrote for her son, Mark, and called him her “lab”: “What he likes, other children seem to like.” Her books were endorsed for supplementary reading in schools. In 1953, she traveled to Paris to translate children’s literature for the publisher Silver Burdette.

Kate Goddard was the originator and manager of the children's book department at Forman’s in Rochester. She made numerous speaking engagements promoting children’s literature.

Kate and John Gilbert Goddard married in 1925 and lived in the historic house for many years. Later, their son and his wife lived there.

Tucked behind 199 South Main Street, on five acres of land, is a sustainable, all electric, energy efficient house built in 2014, with 90 tons of concrete.

Chris, Vicki and their family live in this modern, comfortable home where much of the work and creative touches were done by them. They have put their heart and soul into the home and it shows.

Tour goers learned about this “green” house, its construction and walk around the unique property to see the three barns and the bio-filtered reclaimed wetland and pond.

In December of 1887, Richard Roberts bought a lot on a hill in the southern part of the village. A carpenter by trade, he quickly acquired stone, brick and other materials to build a home for his family, and the foundation was completed by June 1888.

Roberts worked locally and traveled to other job sites, for example, the Adirondacks. He was a staunch Republican, as noted in the Fairport Herald Mail in 1900: “away from home doing carpenter work, he expects to be home on election day to vote for McKinley and the rest of the Republican ticket, as he feels sure this is best for business, where he works and in all other places.” 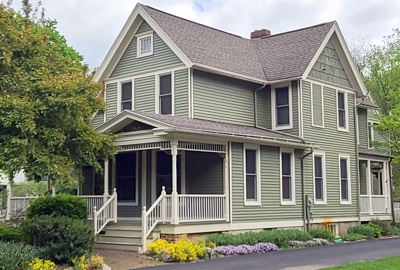 209 South Main has had numerous owners, Fritz and Georgia May purchasing the home in 1971. The home has a Folk Victorian style, sharing characteristics with the Queen Anne style, such as a facing gable and a prominent front porch with spindles. The Mays have done much restoration to their home, for a total of five projects. When the cedar shakes were removed, the original clapboard was revealed as well as the outline of the porch, which was rebuilt. The summer kitchen became the office and laundry room.

The entrance to the home from the front porch leads to the original part of the house. From the front hall, the first room on the right is the front parlor. High molding with decorative corners and pocket doors creates a traditional feel.
Another parlor in the back functions as a family room. A Count Rumford fireplace in the room once burned coal. The fireplace, tall and shallow, reflects heat back into the room. A formal dining room is another room in the original part of the house.

The entrance to the home from the rear leads to a contemporary kitchen with cabinets built by the Mennonites. Adding charm to the room are numerous cupboards, a butler’s pantry, and a coffee bar.

A three-season room on the north side of the home, is a family favorite with its bead board ceiling and floor-to-ceiling windows.

The grounds include flower gardens and an inground pool between thehhouse and the carriage house, making this a lovely village setting. 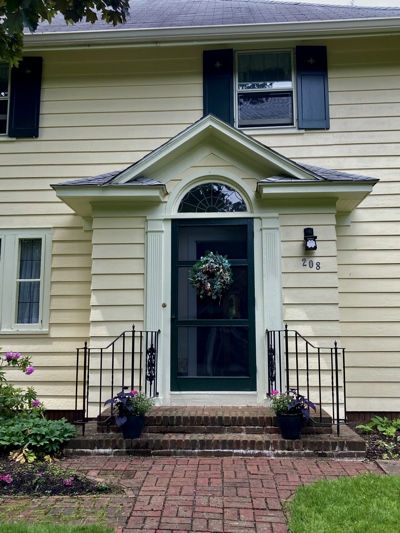 The Baumer House at 208 South Main Street was designated a local landmark in 2022. 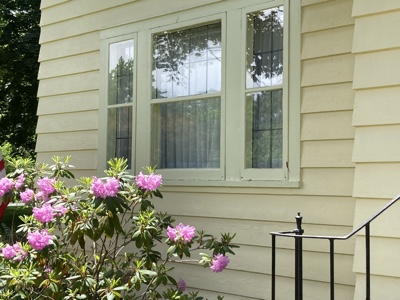 There are leaded glass double-hung windows in the entire house. 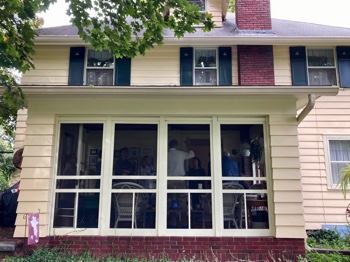 The home has a side three-seasons room. 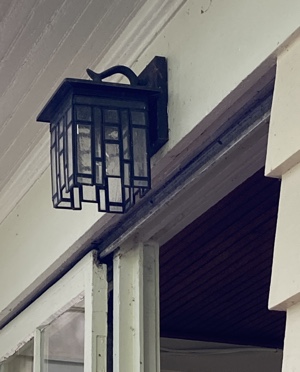 There are craftman style light fixttures at every entrance to the home. 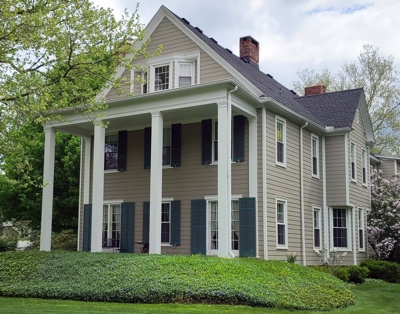 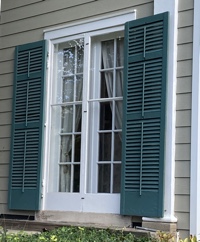 Two sets of french doors lead from the living room to the viranda. 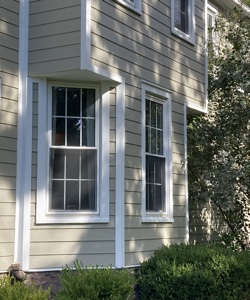 A clue to the original Queen Anne style of the home is the cut-a-way bay on the south side of the home. 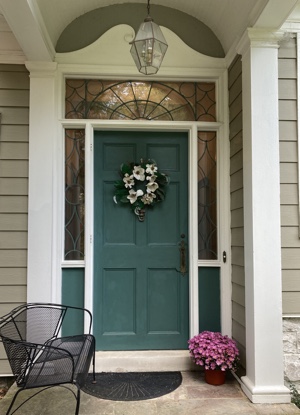 The main entrance on the north side features colonial pillars and pilasters and beautiful leaded-glass sidelights and a transom above the door. 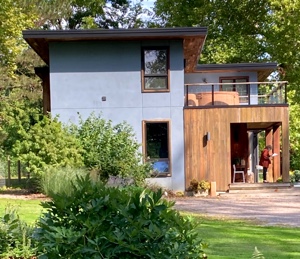 A view of the west side of the contemporary home at 203 South Main Street. 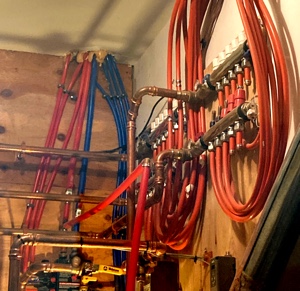 The all electric, energy efficient house at 203 South Main was built in 2014. 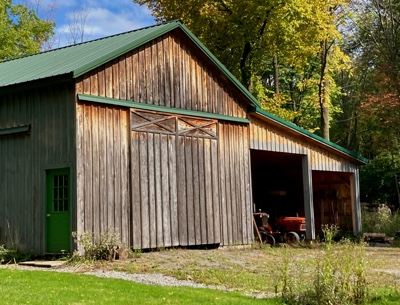 This is one of three barns on the property at 203 South Main Street. 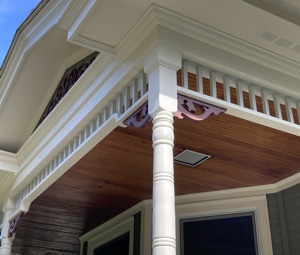 The current owners discovered that the home had a front porch at one time, and had a new one built. 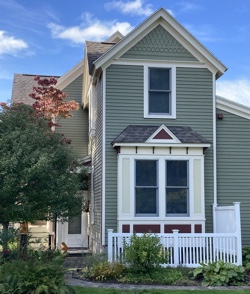 The entrance to the home from the rear leads to a contemporary kitchen, a butler’s pantry, and a coffee bar.