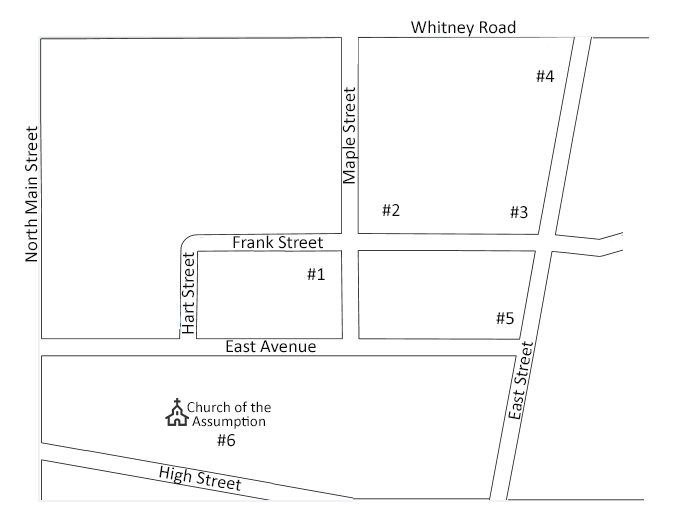 Map of the neighborhood showing the location of the five houses on the tour.

Fairport’s northeast neighborhood was the site of the 2016 House Tour presented by the Society. Five historic homes in the Frank Street, East Street and East Avenue neighborhood were on display.

These homes were constructed on what was the Sanford Tract, an area developed by George Sanford, an entrepreneur and agent who sold lots in this neighborhood from the mid to late 1800s.

These awe-inspiring houses include features from the Folk Victorian, Queen Anne and Colonial Revival styles.

The tour took place from 1 to 5 p.m., Sunday, October 9, and included a reception and exhibits at the Church of the Assumption at 20 East Avenue.

Members' Tickets - Tickets will be mailed to members of the Society.

Purchase Tickets - Tickets (memberships) can be purchased in advance at the Musuem at 18 Perrin Street during regular open hours and at the Fairport Public Library, Village Hall and the Perinton Town Hall during regular business hours. 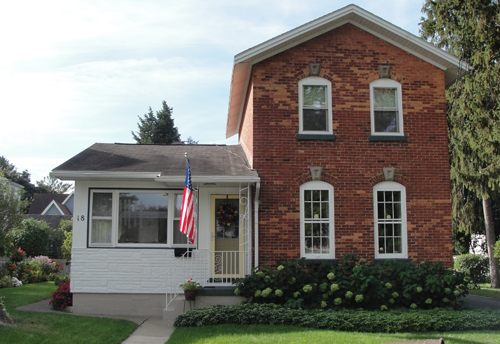 This house, built circa 1880 by Tom Finnegan, an Irish immigrant, has an L-shaped form.

It is made of brick, which is quite unusual in the village. The main windows have segmental arches with two layers of rowlock brick and a center keystone. These original features were popular during this era and found on many of the more elaborate houses built in the Italianate style.

The 1885 map shows an open porch off the half-story wing.

The home has been lovingly maintained by the current owners, who have lived in the house a number of years. 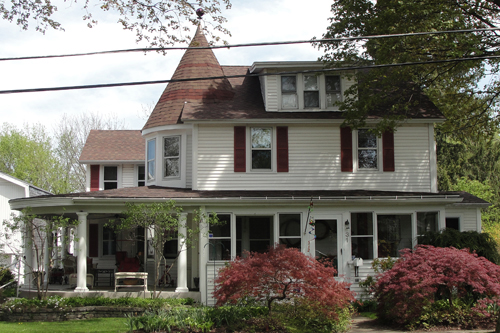 This eye-catching house on the corner of Frank and Maple Streets has an expansive wrap-around porch that is perfect for entertaining.

The 1885 map shows a great deal of open land and a side facing gable home with a small one-story section on the north side.

By 1902, the property was L-shaped with the expansion of the one story section. At that time, there were three out buildings and an open lot on the corner of Frank and Maple.

The back section, the tower and the colonial style wraparound porch are all later additions, as well as the leaded-glass window you will see, all made by the current owner. 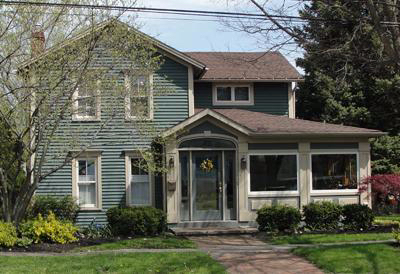 Forty-five Frank Street is an early vernacular gable and wing style home, built in the 1870s.

Over the years, the owners have been busy renovating while maintaining its original charm. It has undergone updates including the addition of an enclosed porch, new flooring and a relocated staircase. 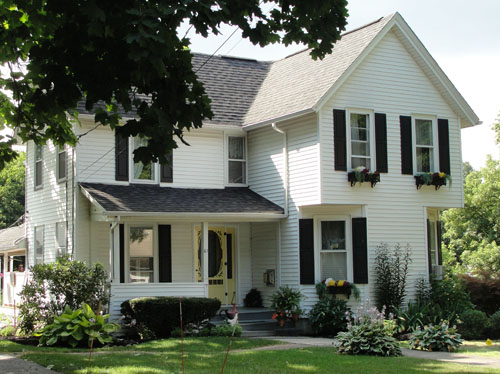 This home, built circa 1870, is likely a Folk Victorian. That style is defined by the presence of Victorian (Queen Anne) decorative elements and was popular from 1870 to 1910.

The front gable of this L-shaped home has a cutaway bay. The front entrance has a three quarter length glass window with wood panels on the bottom and a single sidelight.

A simpler home appears on the 1872 map and could have been built as early as 1851. It indicates that J. Archer owned the property. 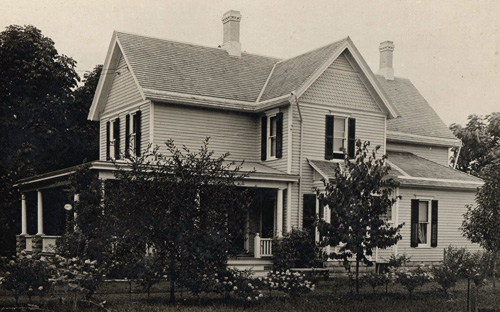 This home was built circa 1890 and exhibits both Queen Anne and Colonial Revival features. At the turn of the century, it had scalloped shingles in the front and side gables, and a full wrap-around porch.

Learn about the owners’ long and interesting history with this inviting home. 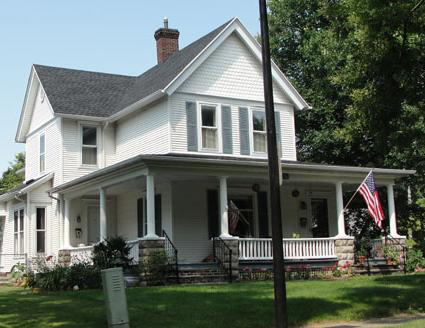 The image to the right is from the Addis Adams postcard collection at the Museum. It was taken circa 1909 and states that it is Luther Talman's house.

The current house at 71 East Anenue shows too stairways onto the porch. This house was converted to a double in the 1960s by the current owner's father with separate entrances to both apartments. 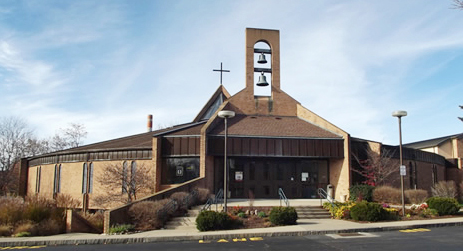 Visit the church, built in 1983 -- 6 on the tour -- for a reception and to learn about the church’s own fascinating history.

Get to “know” George Sanford, the farmer, businessman and developer of the North side neighborhood.

The 1872 map shows the land owned by George Sanford. Sanford Street is now East Avenue. At this time there was no Frank Street. 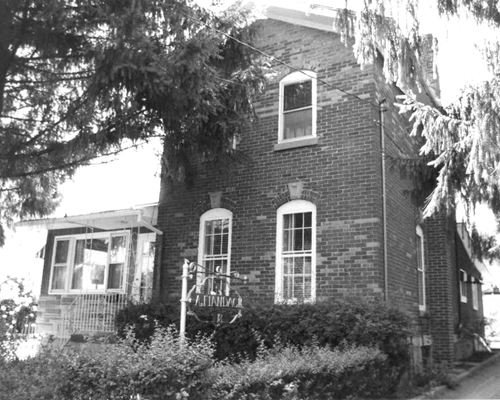 This 1976 image of 18 Frank Street shows a sign out front advertising a place of business. What kind of business was here?

The main windows of 18 Frank Street have segmental arches with two layers of rowlock brick and a center keystone.

The North Side school, shown in an early photo, has become the Crosman building. See exhibits and learn about the history the neighborhood and this building at Stop #6, The Church of Assumption at 20 East Avenue.

The Crosman building served as a community recreational facility from 1962 until he opening of the Turk Hill Road complex in 1997. This image is from 1976.

The owner of 31 Frank Street has created several stained glass windows for the home. 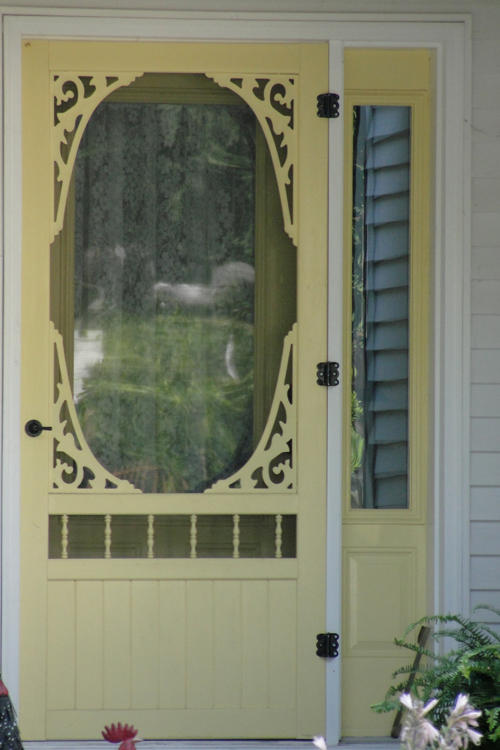 The front entrance of 61 East Street has a ¾ length glass window with wood panels on the bottom and a single sidelight.

The porch of 71 East Avenue is supported by concrete blocks cast with a face which imitates rock-faced ashlar stone. Houses using this new technology were built in the early years of the 20th century.

From the Survey of the Village of Fairport, 1976