“OUR LEGACY” Bike Tour Along the Erie Canal

Welcome to your self-guided bicycle tour of some of Fairport and Perinton’s legacy sites. The theme of this tour is our legacy, and we will focus on a few of the historical and architectural jewels that we treasure in the village of Fairport and our town of Perinton.

Start your ride at Fairport Junction, Lift Bridge Lane West. The tour is about one-and-a-half miles long and will take about one hour; there are bathrooms in the main business area and at Perinton Park, which is about halfway on your tour. Please wear your helmet while you are riding your bike.

Look across the canal and you will see the first stop on this tour which serves as the Dockmaster’s Office. To get to STOP #1 you will travel east from here to Parker Street, take a right, and go over the one-way Parker Street Bridge. Take a right, after crossing, and walk your bike on the pedestrian path west.

You are looking at what was one of 97 stops, or waiting stations, along the 86 mile long Rochester, Syracuse and Eastern Electric Railway (R.S. & E), or trolley, that linked Fairport and Perinton to the older communities to the northwest and the east. Of the eleven stops in Perinton, two were also stations, one of which you will pass on the last leg of your tour.

The distinctive octagonal-style waiting station, with its large protective overhanging roof, was specially designed for this rail line. This particular waiting station, Stop 22, was found deteriorating in a backyard between Egypt and Macedon, then moved and restored by volunteers of the community and the Perinton Historical Society. See Preservation Projects. The R. S. & E. line operated from 1906 to 1931, when the popularity of the automobiles caused its obsolescence. To get to the next stop you will need to go to the parking area, head west to Main Street, take a right and cross the street. The Kennelley Park is just south of the Main Street Lift Bridge.

Vincent Kennelley Memorial Park honors Vincent Kennelley, a former Mayor of Fairport from 1980 to 1989. The park was renovated in 2006, and its popular gazebo was restored and strengthened. During the summer months, the park hosts the annual gazebo concert series each Thursday evening. From the gazebo you can see the bridge bell and the Fairport Public Library.

The bridge bell atop the east span of the Main Street Lift Bridge was cast in 1886. In 1914, it was placed on the new bridge to alert residents when the bridge was about to be lifted before a ship passed under it. From 1965 till 1995, when it was returned to its original position, it was in the possession of Alton Grove, then the area maintenance superintendent for the NYS Barge Canal System, and then Charles Kopp. Today an electronically operated bell sounds the warning, while our legendary bell is used only for special occasions.

To your south is an entrance to the Fairport Public Library, which was located here in 1978.

Continue your tour to the Fairport Historical Museum located at 18 Perrin Street. Go past the gazebo and ride west out of the park to West Avenue then turn left (south) on Perrin Street.

The Fairport Historical Museum was the original location of the Fairport Public Library. Built in 1937, as a Works Project Administration (WPA) project, the building today houses the local history collections of the Perinton Historical Society. Henry Martin designed the building. In 1938, Carl W. Peters, American Regionalist, painted a large mural in the lobby, under a grant from the WPA. The scene depicts agriculture and commerce along the Erie Canal. The grounds around the Museum contain a perennial garden of traditional plants, and an herb garden. The Museum contains a comprehensive pictorial survey of residences and other architecture in the village of Fairport and in the town of Perinton.

Now continue your tour to Potter Memorial by going south on Perrin Street to West Church Street then turn right (west). Potter Memorial is located on the south side, before you get to the Potter Place intersection. Ride your bike to the rear of the building. Did you note the porte cochere where horse carriages would have dropped off their passengers?

This three-hole outdoor privy, originally located at 70 East Church Street, was moved here behind Potter Memorial by the Perinton Historical Society in 2002.

Outdoor privies were very common in Perinton, and were in use well into the twentith century. This one is relatively luxurious and was well built. That is why it survives today. The owner even lathed and plastered the interior walls, probably for some protection from heat and cold, and the elements.

A smaller opening seat was designed for youngsters to prevent them from accidentally falling in. All the seats had covers to prevent accidents and to keep the flies away. Landscape around the privy uses traditional plants, like these lilacs to mask bad odors and to keep the building a little cooler. Note the artistic brick work above the door and window. The window was probably once screened. The other traditional plants here are Jerusalem Artichoke, Hollyhock, Periwinkle and Daylilies along the path.

So how much do you appreciate your indoor plumbing now? If you are interested in the story of how this privy was moved here, visit our Preservation Projects.

You are now in Perinton Park, that is also the title of the Carl Peters painting that you viewed earlier at the Fairport Public Library. Sam Jacobson, owner of Jacobson Taylor Shop, and president of the Rotary Club, along with a group of local tennis enthusiasts, were responsible for having this land allocated for Fairport’s first public park. In 1932, they prevailed on the Fairport Village Board to assume the lease that the town of Perinton had with New York State for this 12-acre site on the bank of the Erie Canal.

If you look closely, you will see that the park cascades down from this level to two lower levels. The lowest level used to be the bottom of the original Erie Canal, and in 1932 it was designated as the park’s baseball diamond and football and soccer field. Starting in 1951, this was the site for Fairport’s Little League baseball teams. Today it is one of the parking areas in the park. The second level was designated for the tennis courts and a small parking area; the tennis courts are still there. The parking area was converted to a children’s playground. The area adjacent to the canal once had a parking area and a road that have since been removed. The original 1932 planting of Black Locust trees were severely damaged by an ice storm in March 1991, but many of the mature specimens can still be seen today.

Now continue east down the Erie Canal towpath. This is a multi-use path so please stay on the right side of the path and ride in a single file. Use an audible signal when overtaking other path users. Note the historical marker that designates where the Rochester, Syracuse and Eastern Electric Railway once ran. Continue east a few more yards and stop at the Switch Tower building on your right.

This little building was a railroad junction switch tower. It was the work station for the switch tender, who would manually "throw" the switches that would cause trains to switch from one track to another. The second story of the tower was designed to give the operator maximum visibility of any approaching trains.

When electric automation rendered the switching job obsolete, the building was moved, first to Batavia, and then to Fairport, to serve as a grade crossing guard shelter. The guard would stop traffic to ensure the public’s safety when trains rumbled through. In Fairport, it was in service from 1956 until about 1960, when the northernmost track was relocated.

Head east from here. On you left you will see the Rochester, Syracuse and Eastern Electric Railway waiting station. This was one of the 97 stops along this line

In addition to beinf a waiting area, this station also sold tickets, and was a freight depot with a loading platform. A second trolley car was used to transport mail and fresh farm products to market. From here cross Main Street. The next stop is the Box Factory on your right.

Daniel DeLand bought the entire block between Parker Street and Main Street on the north side of the Erie Canal in 1852. He built the DeLand Chemical Works factory. His first product was saleratus soda, a baking ingredient that makes dough rise. It sold nationwide, and became the first real industry in Fairport. The factory employed several hundred workers. In 1872, after Daniel died in a tragic elevator accident, the company’s ownership passed to his brother Henry. Henry was an entrepreneur, and used his fortune to invest in Florida; in the late 1880s, he founded the city of DeLand, FL.

Daniel’s son Levi assumed the day-to-day operations of the family business, but a devastating fire on February 4, 1893 leveled the entire saleratus factory. In 1877, he had established the first fire department right on the factory premises, but its proximity to the fire was to no avail. Levi rebuilt the factory.  Stiff competition from companies like Arm & Hammer, eventually put him out of business

In 1906, the York State Fruit Company moved into the vacated factory to produce cider and cider vinegar. Robert Douglas bought the business around 1911, then his Douglass Packing Company struck pay dirt. They invented fruit pectin, and Certo became a household brand, but in 1922, the factory burned down again. This time Douglass rebuilt the factory in brick and stone. In 1947, Certo’s operations moved to Albion, NY

H.P. Neun moved its "box factory" into the facility. In 1985, the building burned once again, but it was rebuilt into the business and retail complex that we enjoy today.

Thank you for participating in the Our Legacy Bike Tour Along the Erie Canal. 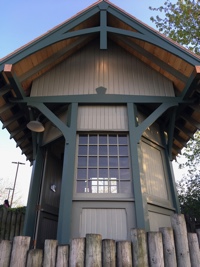 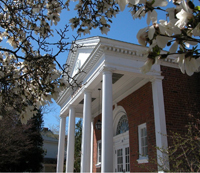 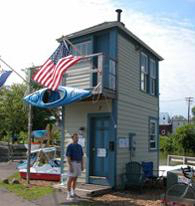 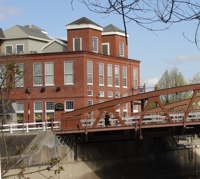