In 2009, the Perinton Historical Society proudly showcased houses and businesses in the historic hamlet of Egypt. One of the first settlements in the town of Perinton, Egypt has been home to orchards, farms and businesses since 1813, when the first town meeting was held. (See the History of Egypt) 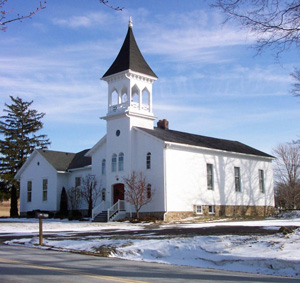 The South Perinton Methodist Church is one of the oldest churches in the town of Perinton. The Society was founded in 1837, and the church was built in 1839. Originally, the building was a single room Greek Revival building built in front of the cemetery. It was small enough to be heated by a small box stove. In the 1860s, when there was a religious revival in the United States, a two-story addition was built. In 1904, the church was enlarged again, and in 1955, the education wing was added. Due to further growth in
membership in the early 2000s, an addition was built on the east side, suitably blending into the existing structure. The building earned the Landmark Society’s Tender Loving Care award in 1995, and is part of the South Perinton Historic District.

Inside, the painted tin ceilings in the front vestibule are still intact. The lights were originally gas and have been electrified. There is a beautiful chandelier in the center, and a stained glass window in the front. Next to the church is an early cemetery where many early settlers from Egypt are buried. 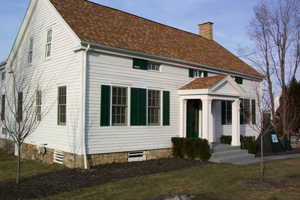 Known as the Ramsdell-Ranney House, this building was built around 1820, and is the oldest wood frame house in the town of Perinton. The house was built by Thomas Ramsdell, and was part of his 320 acre farm in what was then the town of Boyle. He was a well-known farmer, and was able to raise a successful crop of corn in 1816, the year known as “the year without a summer.” Thomas was involved with the town as the Overseer of Highways, Postmaster and Commissioner of Highways.

The house was bought by another successful farmer, Hiram Ranney in 1862. The building has Federal architectural features, and once included several historic outbuildings, which have since been demolished. The building is in the Egypt Historic District. The house is now a home to a stone and landscaping business. The interior is a modern office, but still retains the six-over-six windows of the original building.

To the right of the building is a display garden with products sold by the firm, tastefully blended with the ruined foundations of the former Ranney barn. There is also a section in the old foundation that has water running out of one of the windows. Notice the “fake” New York State marker, which was designed by the company to highlight the historic foundations. 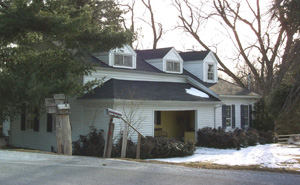 This is a great example of a Greek Revival one-and-a-half story farmhouse set in a rural landscape. The house and barn were probably built by Richard Woolsey in the late 1830s, and contain hand-hewn timbers and logs in the round. A living room and parlor were added in the 1850s by Robert Henry, Egypt Postmaster.

The owners who purchased the 50-plus acre farm in 1948 built a large fireplace in the living room, using paving stones salvaged from a Rochester street, and added a family room adjacent to the kitchen. In remodeling the kitchen, they used the aged barn wood for wall paneling, cupboards and the kitchen table. 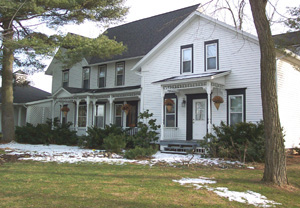 This lovely home has often been called the “Marriage House,” because of the marriage of two different styles of house, merged into a single structure. A new addition was added to the back in 2008, replacing a 1990s glass sun room. As seen from the road, the section on the right was built in 1829, and the section on the left in the 1890s.

Many of the rooms are remodeled keeping the charm of the old. The pantry area is unique, with doors and drawers opening up from both sides into different rooms. The wainscoting in the dining room is unusual, with light and dark woods evident in a random pattern. In the basement, there are hand hewn beams, a cistern and well. 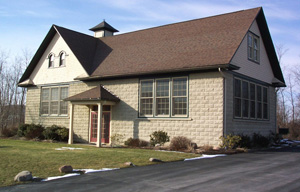 This building has gone through three distinct uses, first as a school, then as the Fairport Grange and now as a law office. Built in 1908-1909, this is believed to be the fourth schoolhouse built in Egypt. It began as a one room schoolhouse, with the east wing added in 1931. The building has distinctive cast-concrete blocks, which were made to look like cut stone. The upper gables are clad with wooden shingles, and the building has nine-over-nine double-hung windows. The Fairport Grange took over the property in 1955, and occupied the structure for the next 40 years.

Today the building is a law office. This is an excellent example of what is called “rehab and reuse,” where historic buildings are rehabilitated and used for another purpose, keeping the outside ambiance of the original structure. The building was designated as an historic landmark by the town of Perinton. 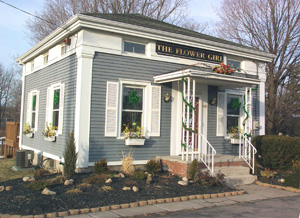 This house is a good example of a square form of a Greek Revival structure. Because of their size, not many of these structures exist anymore without drastic alterations. It has frieze windows along the top near the pyramidal roof. Other classic details include wide cornices and corner pilasters.

The house first appears on an 1852 map, with Philemon Austin listed as the owner. The 1850 census shows Austin as a pump maker.

The house was owned by Nicholas Marx, a wagon maker, in 1872, and remained in the Marx family into the middle of the twentieth century.

The building is now a florist and gift shop called The Flower Girl. It has been heavily remodeled, but there are still several exposed hand-hewn beams on the second floor. 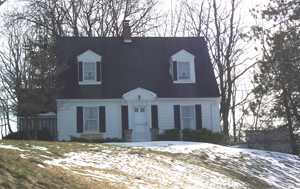 The next owners extensively remodeled the house, landscaped the property and reused materials from the five old farm buildings that were taken down. The back stone porch, shown on the right of the house, was built over the original house foundation. The barn next door was built in 1969-71, incorporating parts from the several buildings. The upstairs walls of the barn are paneled with barn wood, and there are barn wood beams framing the front window.

See the calendar for dates of upcoming tours, and enjoy brief descriptions of past tours within the Historic Tours section of the site. 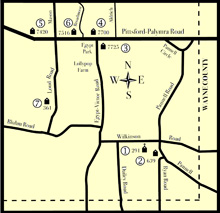 The gate to the graveyard at South Perinton Methodist Church. Many early settlers from the Hamlet of Egypt are buried at this cemetary located next to the church.

The stone wall from an early barn - 7516 Pittsford-Palmyra Rd.