Originally built in 1822, it is the oldest structure you will see on this tour. It was built by Elijah Fullam to serve as a tavern on the Erie Canal. It was also the first post office. Its original location was where West Church Street crosses the current canal at the west edge of the village.

There was a town there called Fullamtown, which was in competition with Fairport as the center of commerce. The canal path was moved, and targeted to run right through this house. So, around 1850, the inn was relocated to its present site and converted to a 14 room private residence by Mr. Charles Dickinson. In 1874, sisters Julia and Emily Dickinson and companion Elizabeth Dowd opened a library on the second floor. Membership was $1.00 a year. Names of people with late books were published in the town paper. Many deserving children were given free passes.

This site may have been a station on the Underground Railroad, since what appears to be a secret passage is still visible. The structure has seen some significant reconstruction around the 1870s. The front second-story double windows were added, and perhaps the entrance was modified. Original roof crossbeams were from hand-hewn trees, and the bark still appears on them. The Warren family purchased the house in 1899. At another point, the home also served as an apothecary, and, Dr. Erich Jacobson practiced medicine here for many years.

A grave is marked with a headstone in the cellar carrying the name of Mr. Dickinson’s mother. Yet, there is another head stone for her in the Greenvale Rural Cemetery on East Church Street. Rumor is that the grave conceals the body of a female slave who died of consumption. This building is now a place of business. Take note of the new full front porch, stairs and slate walks. Both staircases are original. Floors have been repaired and refinished, and the walls have been opened to show where the original tavern was located. 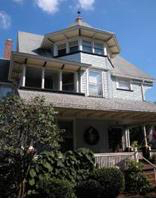 This impressive and large Queen Anne is built on the site of the old George Bown Carriage Factory. It is still sometimes referred to as the Bown House. That structure burned down in 1887. The next owner was the president of the Fairport Savings and Loan Bank, Stanley Peacock. Another owner operated an insurance office on the first floor.

The house became a double residence during the depression, and the front entranceway was altered to create two entrances. The house has an asymmetrical floor plan and boasts a turret, bays, and multiple porches, including an interesting recessed porch on the second floor. This home once had gargoyles and a slate roof. Note the unique oriel or ship’s captain window on the south side, and the polygonal turret with window bay at the attic level.

There is also a secret trap door to the basement hidden in the closet under the main staircase. Shhh! There are ghosts too! 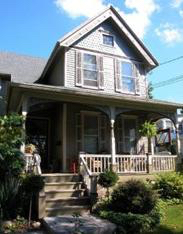 Edward Dudley erected this home for his new bride in 1880. Dudley operated a dry goods and grocery store on North Main Street near the canal bridge. Edward was also an entrepreneur, starting other businesses to manufacture and sell Napoleon Baking Powder and Utopia Corn Starch. For a short time, Edward held the position of mayor. He later opened a fine English china and silver store on East Avenue in Rochester. The Dudley name is well known in Fairport. The Dudley school is named after a relative of Edward. Another relative owned the Dudley Lumber Company on the site of the current parking lot of the Box Factory. The backs of flooring in this house is stamped "Dudley Lumber Co." The home remained in the Dudley family until the mid 1950s. Dudley's local descendants were very helpful in providing original photos and historical data during the restoration.

The house is built in the Queen Anne style. Exterior features include asymmetrical architecture, an unexpected arched side entry, and a very wide front door with the original bell, and geometric carved medallions on the spandrels of the front porch, and on the face of the wide, ribbed bargeboards at each roof peak. As with many village houses, it became a "double" during the depression.

In 1993, the house exchanged hands and in 2002 the new owners began an extensive restoration. It was converted back to a single residence in 2003. Extensive interior, exterior and landscaping alterations are evident, including a new rear porch and walkways. Once covered in aluminum siding, the house now appears in its original siding and color. Interior features include pocket doors, the original soapstone fireplace in the dining room, an office and refinished staircases. Note the "fresh" 19th century mural by Michael DeLuca in the new keeping room. The fireplace mantel in the keeping room is from a Rochester Third Ward mansion.

The yellow barn behind the house was once the carriage house to this property. It eventually was moved, and became a "potting shed" for the Stephen Tomato Seed business.

Dating from the 1840s, this Greek Revival cottage was built with only two rooms and a loft. The property had many early owners. Andrew Deal, the editor for the Fairport Herald News, lived here for 49 years. It was next sold to Mr. and Mrs. Martin. She was the town librarian for many years and probably added the previous library at the front of the house. Over the many years, and owners, the alterations all work in complete architectural harmony.

Outside, see the trellised front porch and the raised garden walls topped with Chinese Chippendale fencing. Don’t miss the architecturally significant brickwork in the rear garden area. The garden shed is designed with Greek columns. 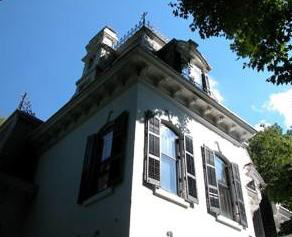 Known as the "Grand Dame" of Fairport, this Second Empire style mansion was one of the first homes erected on South Main Street. Hiram P. Wilbur, who was the first superintendent for the Erie Canal, and also the town postmaster, built it. It was a working farm with large acreage, barns and multiple out buildings, including two summerhouses and a teahouse on the north lawn, where the current gazebo sits.

Constructed of brick, it featured iron cresting on a slate mansard roof, ornamental brackets beneath the overhangs, multiple porches, and arched and shuttered windows with keystones. The Wilburs employed a servant, possibly a nurse to the family of seven and a farm helper, who stayed in the house. The original home had a significant two-story addition at the rear. Its architecture and fine details match perfectly with the original.

The Tinney family purchased the property, and had an English gardener add many rock gardens and a shrubbed curved drive. It had 16 rooms, and at one point, became a nationally respected school for 14 mentally handicapped children. One new owner had to remove blackboards from the walls of many rooms. The current kitchen was once the woodshed, complete with a brick floor.

Several of the exterior and foyer antique lighting fixtures were relocated from the Boston area. Note the unusual corner treatment above the living room mantle. The original marble surround can be seen in the dining room. As you enter, take notice of the intricate chimney details, and the original slate-shingled roof.

The Wilbur House was designated a village of Fairport landmark in 2008. 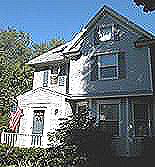 This cozy village home is an example of early twentieth-century architecture. The Slocum family, who came to the colonies in 1635, and their descendants settled in Perinton in 1804. The original home was built in 1910, and remodeled after WWII. It sits on a large lot, with a carriage house at the back of the property. Beside that structure, the homeowners have created a series of raised vegetable and flower gardens.

At some point, the front porch was modified, family room, and a deck were added. The front yard is designed as an English garden, with a meandering brick walk. Interior floors are maple, and the original fireplace can be seen in the living room. The stairwell rail was relocated from the DeLand mansion, site of the Baptist Home. 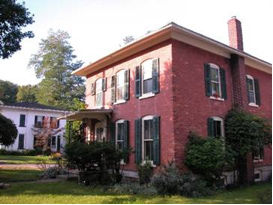 This home, and its sister house at 164, make an attractive pair on the South Main Street landscape. This is an almost untouched original home. George Filkins built it in 1875. Its unpainted bricks were made in a kiln at Ayrault and Jefferson Avenues.

The interior shows the original footprint, with the addition of a small room at the rear. Built in an Italianate style, it features segmented arched windows without decoration and a low hip roof. Pay attention to the original staircase and the graceful splay of the lower steps.

This home, the Filkins-Templeton House, was designated a village of Fairport landmark in 2019. 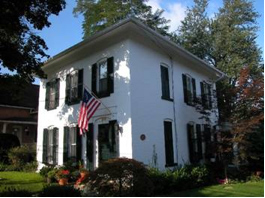 George Filkins also built this house in 1875. When complete he sold it to Mr. Harrison J. Wooden. It mirrors number 160 at the opposite corner of George Street. Filkins, then named two streets after himself: George Street and Filkins Street.

This painted brick house has several fireplaces, including one in the basement that may have been used for the original kitchen. The front entrance may have had a small porch, similar to the one at 160. The original front door was replaced with an interesting and functional Colonial Dutch door. The original structure has seen some modifications, including a family room, side porch, attached garage and rear staircase leading to a master suite.

This home, the Filkins-Howes House, was designated a village of Fairport landmark in 2020. 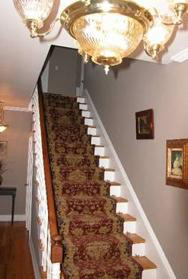