The in-person Society House Tour is back. Mark your calendar today!

This year’s tour affords the opportunity to visit six wonderful homes at the southern entrance to the village: South Main Street, a historic area of architecturally distinguished homes.

The Society will have a virtual tour of six homes and gardens located throughout Perinton.

Videographer Noah Lucia, of Sidekick Films, will showcase these homes by recording the exteriors, some gardens, and a few interiors.

The virtual tour is for members only. For more information visit the Homes & Garden Virtual Tour - 2021 page.

Due to COVID-19 the tour this year was canceled.

The house tour this year featured homes on three streets on the north side of Church Street: West Avenue, West Street, and Woodlawn Avenue. Many of the houses on these streets were already built by 1899 and have been beautifully preserved. See the West X West X Woodlawn House Tour page.

Many houses on Dewey are typical of the Colonial Revival style. This style was popular from 1880 to 1955. For more information go to the Loving Life on Dewey House Tour page.

The 2017 tour featured a neighborhood that was heavily developed and altered by George S. Filkins. Two streets that bear his name (Filkins and George) are home to a number of houses that were built, lived in, or reloated here by Filkins. More information can be found on the Filkins in Fairport page.

This years tour highlights homes in the North side neighborhoods of the village of Fairport.  More information is on the North Side Tour page.

Potter Place: Past and Present was the theme of the 2015 House Tour. There was be a feast of architectural styles to view!

From West Church Street down Potter Place to the end of the park, the popular architectural styles of the 1920’s and 1930’s were showcased. The street itself includes Colonial Revival, Craftsman, Prairie, Minimal Traditional, Ranch and Neo­Classical styles.

The tour included a reception at the Potter Memorial with historical displays and refreshments. Tour goers walked the Potter grounds and learn more about the Potter family and its legacy. For more information see Past & Present - Potter Place.

The 2014 tour took us to a number of historic homes on Roselawn Avenue in Fairport. As we celebrated the 100th year anniversary of Fairport's Lift Bridge, we thought it only fitting to showcase some canal side homes constructed in the late 1800's and early 1900's. This year also featured a tour of the Sunflower Canal Boat and Mooseberry Soap Company demonstrated soapmaking at the Museum. For more information on this tour see the Roselawn Avenue and Cole Street House Tour.

The 2011 PHS Annual House Tour will featured the "community" of Forest Hills, Perinton. This suburban residential development reflects the design trend of residential suburbs of the 1930s, which grew out of the "Garden City Movement" introduced in America in the 1920s. The Garden City concept was developed in England at the turn of the century to promote population movement away from unhealthy crowded cities to rural areas.

One of the oldest hamlets in the Town, Bushnell’s Basin was designated the first local preservation district in Perinton. The tour featured three landmark homes and two preservation sites. The homes are examples of Greek Revival architecture and a “rammed earth” house, all built in the first half of the nineteenth century. The sites are the Bushnell’s Basin Cemetery and the WW I Bunker at Burnley Rise. Bushnell's Basin & Ayrault Road 2010.

Mr. Nelson Lewis of 128 West Church Street was a farmer and the original owner of a large parcel of farmland; part of which became the Faircroft Subdivision. The area of development encompasses a block of West Church, Fifth Avenue, Clifford Street, Galusha and part of Nelson.

In June of 1926, the first of Faircoft Subdivision homes were started. The post Victorian years saw the emergence of American architecture such as the Dutch, Colonial Tudor Revival and the Bungalow or Craftsman style. Faircroft Subdivision-Spring 2008.

West Street is one of the earliest streets in Fairport. Many of the houses were built between 1852 and 1872. The two main landowners were Martin Wood and Omar Wilcox. Martin Wood owned the property on the west side of the street and Omar Wilcox had a house on West Church and owned a large amount of property on the east side. West Street-Spring 2007.

The tour of along these two streets included many of the oldest and grandest homes in the Village of Fairport. East Church & South Main-Fall 2005

Walking Tour of the Village of Fairport

The Town of Perinton Historian, Bill Poray developed a tour guide to of many of the historical properities in Fairport.

The Walking Tour Brochure can be downloard in PDF format to your desktop from the Town of Perinton website. Printed brochures are also available at the Town offices at 1350 Turk Hill Road, Fairport, NY 14450.

Fairport is very fortunate to have over 25 locations with hitching posts and/or horse mounts. The Structure Committee has documented and photographed these treasures from our past. More about Hitching Posts & Mounting Blocks.

A Tour Guide of Hitching Posts & Mounting Blocks is available in PDF format. 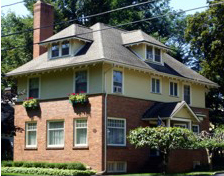 The tour in 2015 featured 7 homes on Potter Place. This Prairie style home is at 24 Potter.

53 Roselawn Avenue will be one of the homes featured on the tour in 2014. 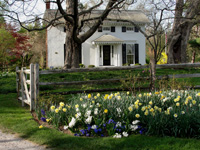 The house at 1 Green Ridge Road has wooden scalloped trim on the eaves, front porch, and window cornices was a part of the Bushnell's Basin Tour of 2010. 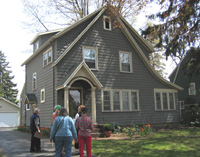 Members flock to the historic tours each year. Shown here is a home in the Tudor Revival style in the Faircroft Subdivision, located in the village of Fairport. In 2008, 250 members enjoyed the tour of homes built around 1920-1930.

Vicki Profit leads an historic tour of Civil War solders of Perinton at the Mount Pleasant Cemetery in 2011.

The Structure Committee of the Society developed a tour guide of Hitching Posts and Mounting Blocks in the village of Fairport. The guide is in PDF format online or you can visit the Museum to pick up a copy.