Join the Society now. The tour each year is included in membership. Individuals dues are $15, families $20. If the PHS receives the form and payment by early October the tour booklet will be mailed to your home. Download the Membership Application . 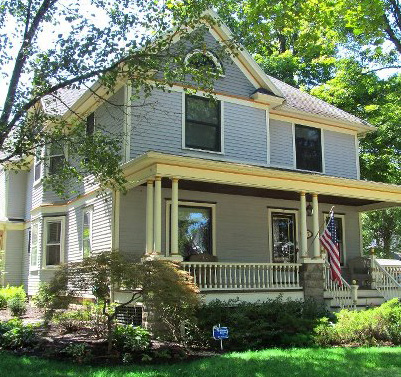 The original Gothic Revival style house owned by Adah Axon burned down and this home was built to replace it in 1910. In 1902 there was a carriage house in back, so likely that structure is older than the current house.

Emma Axon inherited the home in 1925 from her mother, Adah. Emma married Hal Scoby in 1926. Hal played a prominent role in Fairport becoming manager of the Fairport Canco plant, which later became the American Can Company. He also founded of the Fairport Planning Board.

The home has many features of the Queen Anne style. The dominant front facing gable, free-classic style front porch with grouped classical columns that are raised on a pedestal to the level of the porch railings and a two-story bay window. The pedestals are made of cement blocks, a common material used during this period.

The gable end has a fanlight window in the peak. The hipped roof line of the main house are both Queen and Colonial Revival features, but the four over four form is more often seen in the Colonial Revival or Prairie style homes. The Landmark Society of Western New York calls this style, Queen Anne/Colonial Revival Transitional.

The inside of the home still has the original oak floors, chestnut wood trim, pocket doors and a beautiful front staircase.

In 2008, extensive construction work was undertaken at the rear of the house adding a two-story addition that enlarged the kitchen and created a family room. A new porch that wraps around the side to the back was added. Many of the details of the older part of the house were incorporated in this addition. 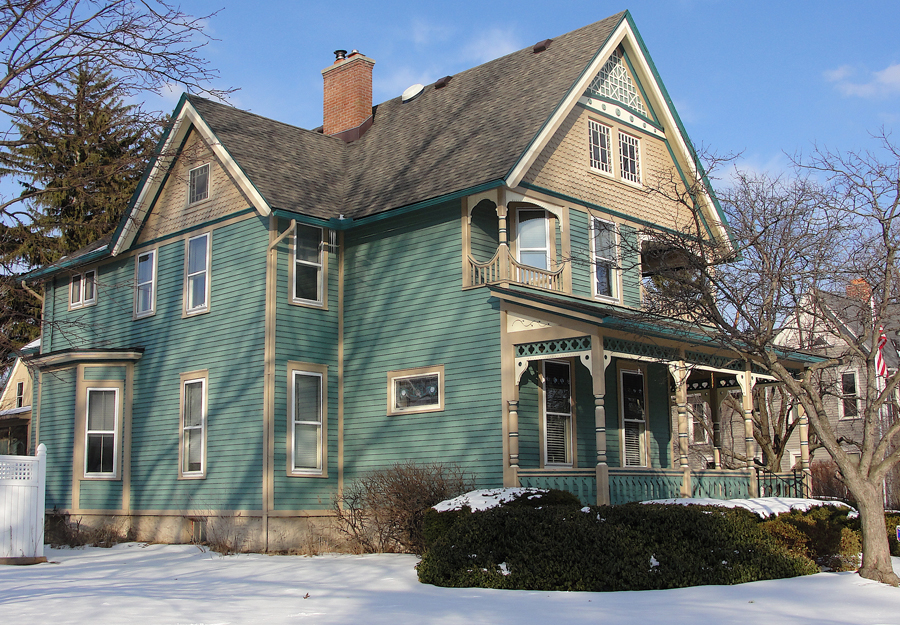 The house circa 1880 was built for Irving Eldredge who was listed as a farmer in the historical directories. The inside of this house has beautiful parquet floors, decorative panels in the doorways and pocket doors. The exterior is painted in period colors that accentuate the glorious details of this home.

There is a large Gothic Revival style carriage house in the back of the house that was likely built around the same timeframe. It has scalloped shingles in the front gable, a hay- loft and large front entrance.

Queen Anne style homes are often divided into two principal subtypes. The first is based on characteristic variation in shape, the second on distinctive patterns of decorative details (often referred to as gingerbread). This house clearly is the latter.

This house has a dominant front-facing gable, patterned shingles, bracketed cutaway bay windows, integral recessed upper porches and a full width porch with turned porch supports, bracketing and gable detailing. The windows size and shape varies. Note the two paired in the gable have four panes surrounded by smaller panes. It also has a beautiful stained glass window on the west side of the house.

An example of the other subtype can be found just down the street at 11 West Church Street. It has a dominant front-facing gable, steeply pitched roof and a free-classic style porch that wraps around echoing the curve of the round tower. The turret or tower has patterned shingles and raised decorative banding.

This property dates back to 1875. The land was conveyed from the Martin Wood farm to the Knapp's. The house however was not built until early 1900's. It is a simple version of a Queen Anne style home. Identified as such because of the steeply pitched roof. 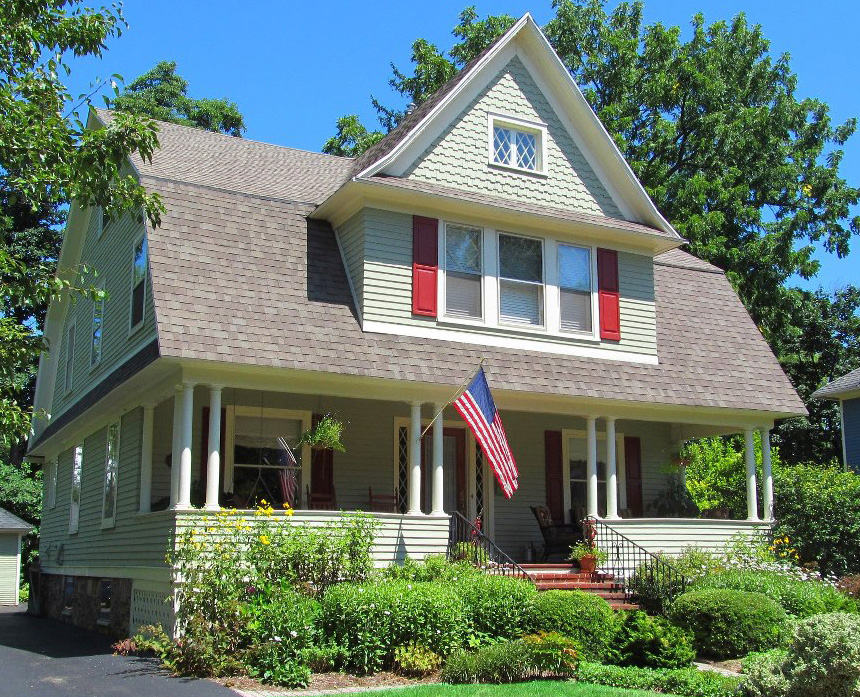 This home, circa 1898, was built for Edward Snow. Mr. Snow worked as a bookkeeper for Dr. Weir who manufactured veterinary medicines. He later joined the family furniture business. In 1883 he married Lelia Marring and they had four daughters, including Marjorie, who went on to become one of the founders of the Society in 1935.

The house was designed by J. Mill Platt – a two-story house with a gambrel roof, large second floor gabled dormer with 3 grouped windows, a pent roof and paired windows that have diagonal patterned sash glazing. This patterned sash glazing is repeated on many of the windows. It has a full front porch under the gambrel roof with classical grouped columns.  The house has a fireplace, gumwood trim, pocket doors as well has stained glass windows. Note the detail photo at right, of the porch skirt.

Nelson Lewis built 100 West Church Street in 1872. The structure has had few changes to the house since it was built and has been meticulously restored inside and out. (See image on right)

The McAuliffe-Fisk House has many Folk Victorian style characteristics; front gabled roof with smaller east and west wings and 2 story bay windows. Note, the way the shutters open to a triangle shape so they open the window area. The shutters have louvers and swing on hinges. The shutters have 3 panels to accommodate the long height of the windows. There are simple window surrounds with a simple pediment above.

The front porch is 1 story with classic columns and flat porch spindles. The east side porch has unusual post supports, which are flat with a curved cut out which matches the curved trim on the front door and brackets.

The center gable has a round top louvered arched vent capped with a drip mold. The front door shows Italianate influence - paired front doors with curved windows and trim.

In 1882 Patrick McAuliffe purchased 100 West Church Street. He was one of 2 owners of the Green and McAuliffe Lumber Yard in the Village. In 1904, Ephraim Fisk bought this house. Ephraim and his son Elliot and grandson John were all prominent attorneys in Fairport.

This property was designated a landmark by the Preservation Commission in December of 2009. The large Copper Beach tree in the front yard is about 50 years old and is part of the landmark designation. 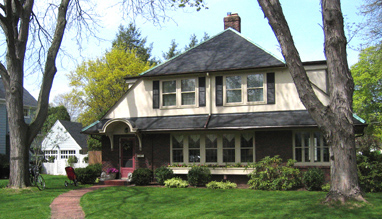 This elegant French Eclectic style home is located at the corner of Fifth Avenue and is easily appreciated from two sides.

The home has many exciting architectural features beginning with the horizontal play between brick and stucco. Notice the simple beauty of the symmetry of the face of the house, the unusual five panels of windows, the flower box, the dramatic hipped roofline with copper ridging and the graceful barrel arched overhang of the entrance.

The home at 116 West Street is a French Eclectic style.

Mr. Curran Mabry originally built the house in 1925. Mabry was a mason and homebuilder. He lived in East Rochester and built this home on speculation. Mabry's craftsmanship as a mason is evident throughout the house. Most notably is the brick and stucco English Tudor or Manor style, something quite rare in Fairport. This similar style is also present in some of the houses he constructed in East Rochester. When the house did not sell during the Great Depression, he and his family moved into it themselves. It later passed to Curran's son who operated an insurance business from the home.

A very unique feature of the house is that it sits very low to the ground. While it has a full height basement, there is only one step down to the ground instead of the typical three or four. Also note the abundance of wood trim, believed to be mahogany, and the leaded windows.

In 1999 a new kitchen and garage wing were added. It blends well with the original architecture in repeating the hipped roof and stucco elements. The original structure and interior remain essentially intact.

This Colonial Revival house was designed and built in 1937 by Architect Howard L. Stone for Dominic L. Streppa. Mr. Streppa was extremely involved in the design and with every detail of the house.

The center entrance with a pediment has a single door with fanlight above and sidelights. The second floor windows extend into the gabled dormers. Inside there are oak and black walnut peg floors that are original to the home, as are the gold Italian marble fireplace, china cabinet, moldings and flagstone walkway.

The dining room of the house is circular in shape and extends entirely beyond the main part of the house. Originally there was a drape that framed this room and was used to close it off from the living room. The dining room extension is used as a second floor veranda. 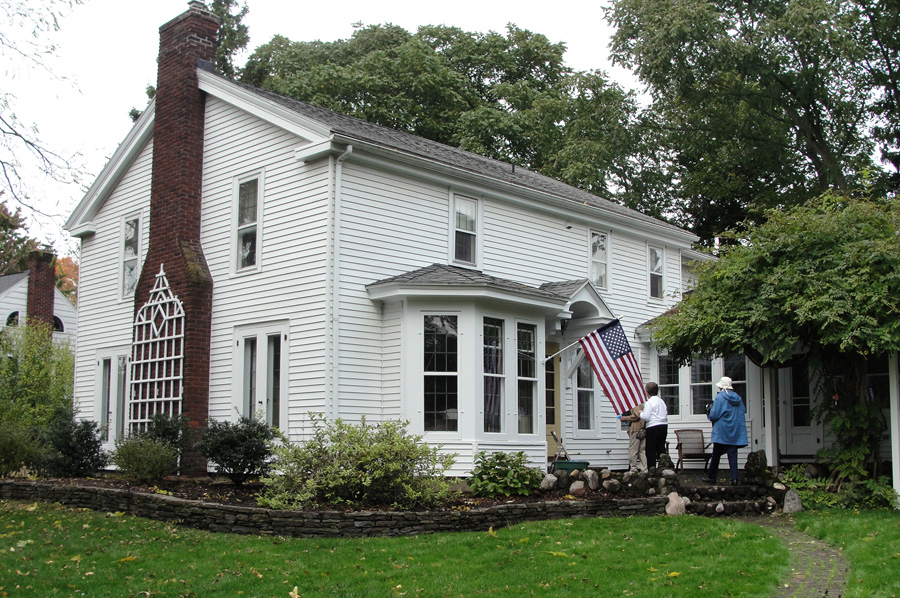 The home at 128 West Church was originally a Greek Revival farmhouse built circa 1843. It is on the 1843 tax list, the 1852 map and may have been on the 1934 Holmes Hutchinson Erie Canal Survey map.

John Smith, who held public office in Perinton, built it. In the 1870's Nelson Lewis, a farmer became the owner. He was the first Commissioner on the Board of Water Commission in Fairport.

The main part of the house is post and beam construction. It has been modified with leaded glass windowed French doors that flank the fireplace and chimney, a bay window, an addition and garage on the side.

Much of the Nelson-Lewis Farm was subdivided around the 1920s. The subdivision is called the Faircroft Subdivision. 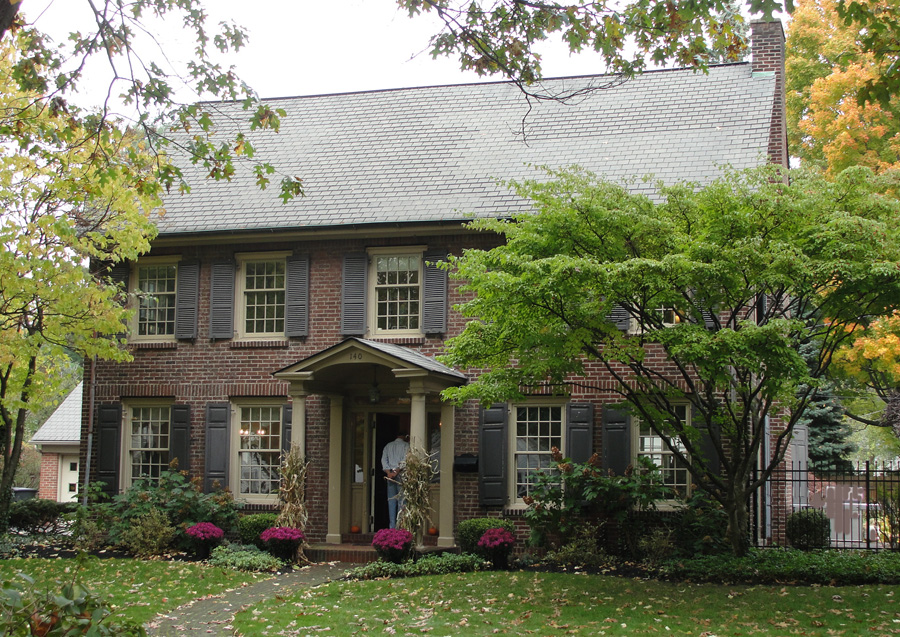 A winding brick path leads to an impressive center entrance with a portico. This is a fine example of a Colonial Revival style home that was built in 1920 by the Otis family, who were in the lumber business.

The center entrance has a single door with a fanlight and sidelights. The portico has a curved underside and gabled roof and classic colonial columns. Inside is a vestibule that leads to the center hall and beautiful staircase to the upper floors.

A winding brick walk leads to the center entrance of this all brick home.

This all brick home has 12 over 12 paned double-hung windows on the lower floor and 8 over 12 on the upper floor. There are wood shutters that appear to be original on most windows.

There are French doors that flank the fireplace in the living room that lead to an outside courtyard and gardens. A room in the back of the home that has windows across each outside wall. This room is repeated on the upper floor.

17 West Church has fanlights in the front and on the east side gables. 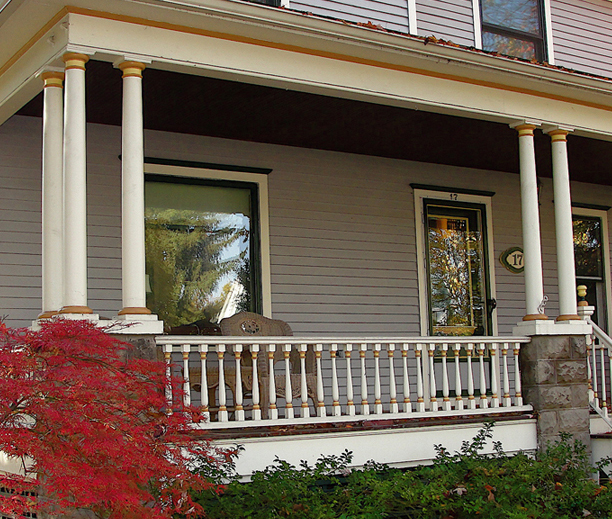 The free classic style front porch at 17 W. Church has grouped classical columns that are raised on a pedestal to the level of the porch railings. The pedestals are made of cement blocks.

There are two styles of wood shingles and patterned stick work in the gables of 48 W. Church Street. 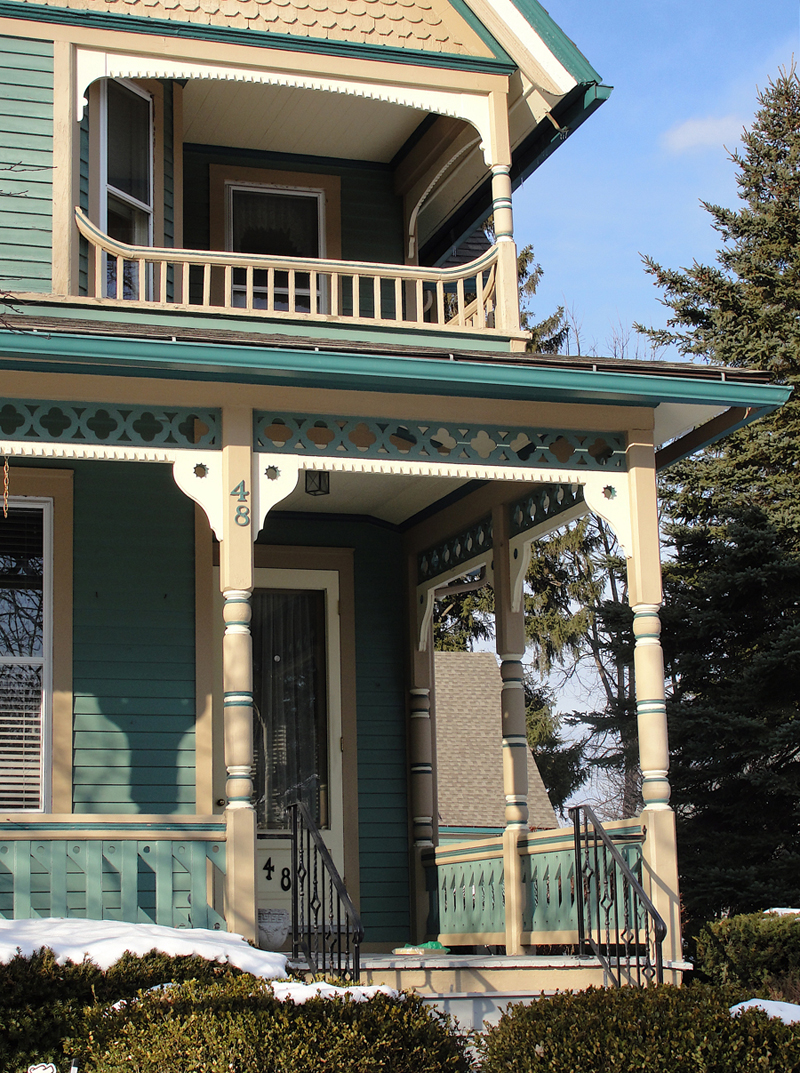 48 W. Church has recessed upper porches, a side porch and a full width porch with turned porch supports and bracketing. 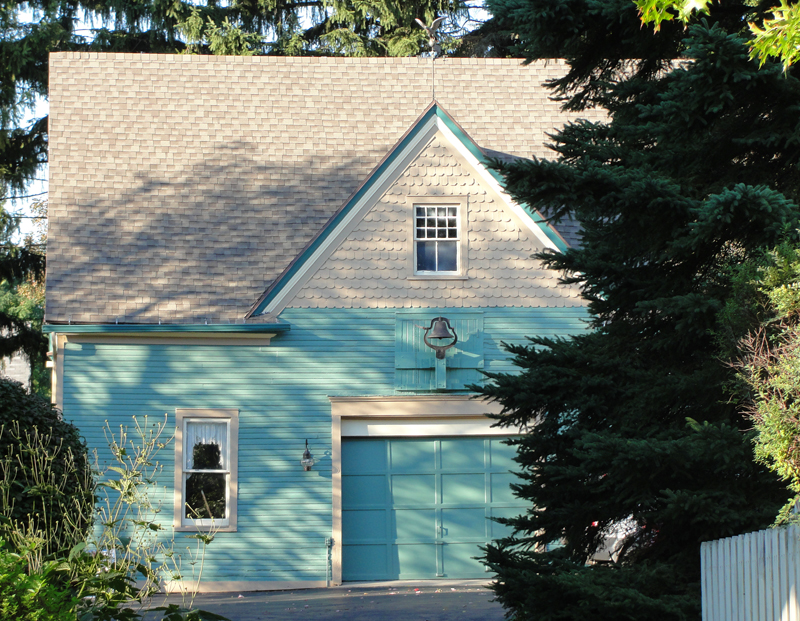 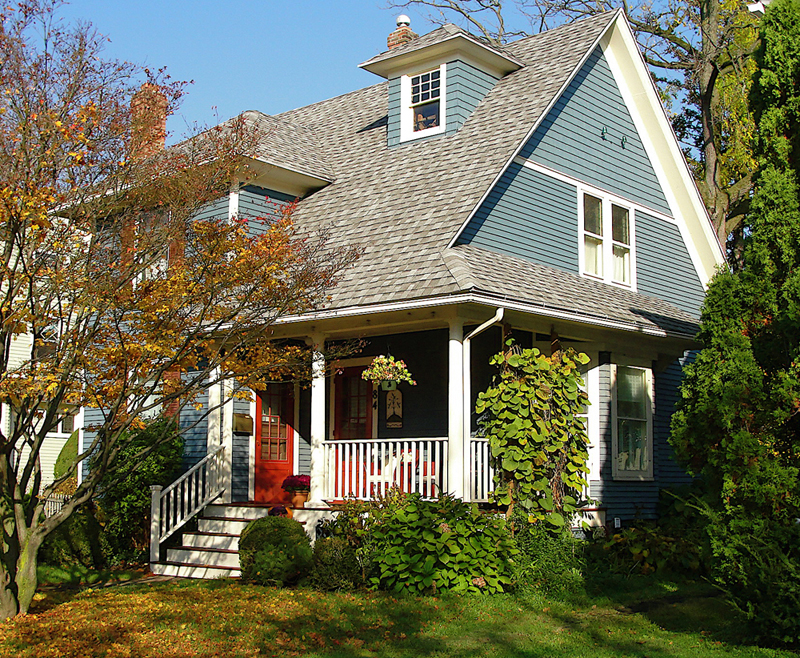 84 West Church is a Queen Anne style home. Identified as such because of the steeply pitched roof.

100 West Church Street is an example of the Folk Victorian style. It is a designated village landmark. 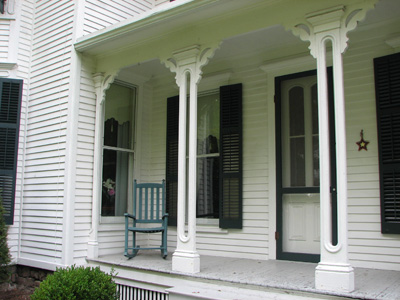 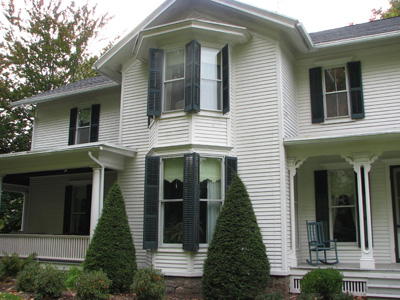 The shutters at 100 West Church have 3 panels to accommodate the long height of the windows.

On the west side in the gable of 140 West Church is a fanlight window with brick surround and keystone. It has a storm/screen that is divided into 3 parts.